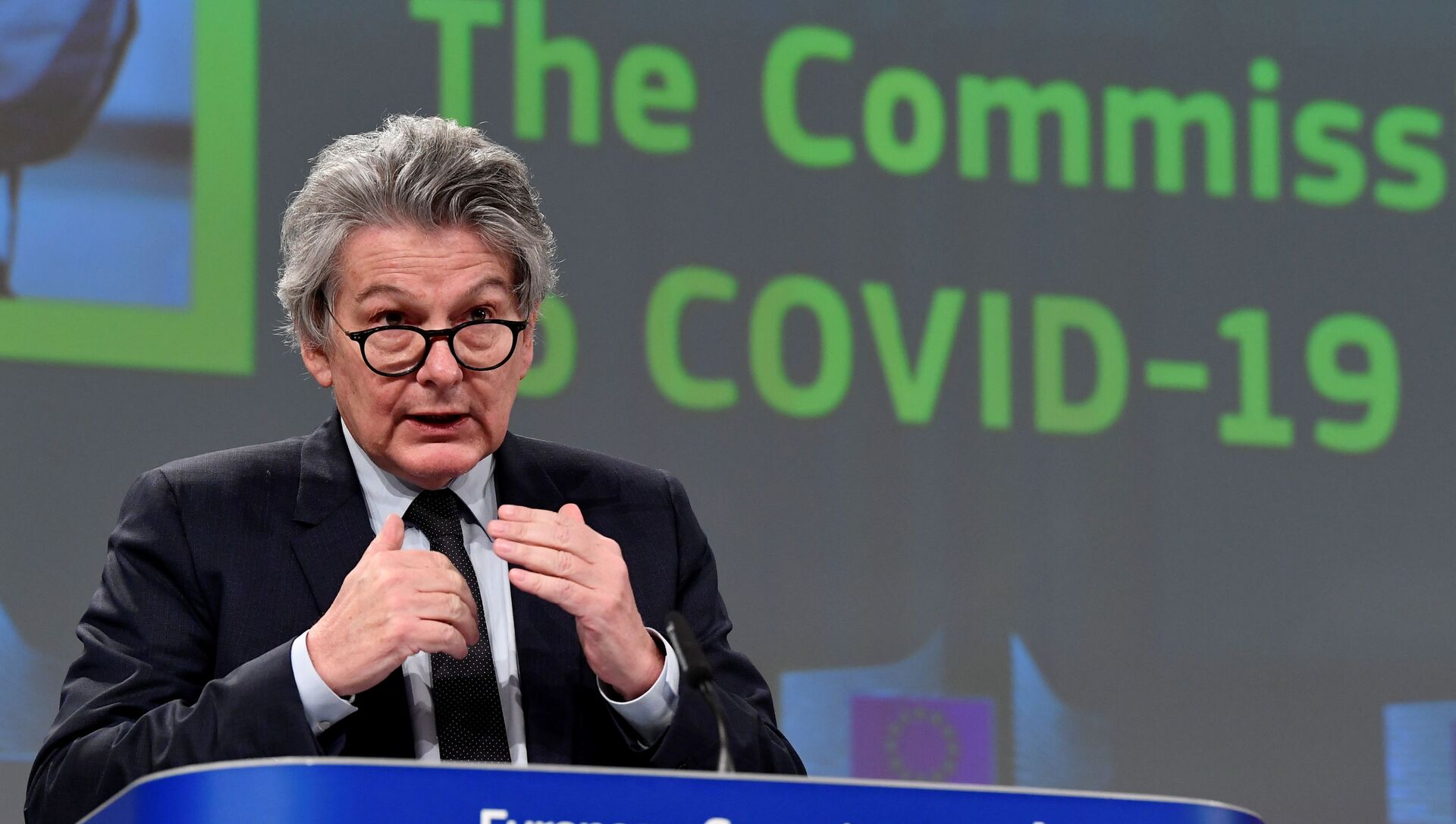 © REUTERS / POOL
Subscribe
The European Union's powerful Commission and its president Ursula von der Leyen have faced harsh criticism for their insistence on running centralised coronavirus vaccine procurement for all 27 member states from Brussels. Their response was to launch a 'Vaccine War' with the UK and other nations, blocking exports.

The European Union's trade chief has further escalated the bloc's COVID-19 'Vaccine War' with the UK — despite warnings from a fellow Eurocrat.

EU Internal Market Commissioner Thierry Breton, a former French finance minister, said "zero" doses of the AstraZeneca 'Oxford' vaccine produced at plants on the continent would be exported to the UK until the Anglo-Swedish pharma giant catches up on deliveries under its contract with the bloc.

Breton rejected an offer from British Prime Minister Boris Johnson to share jabs on order from plants in the Netherlands and Belgium, Insisting "there is nothing to negotiate".

Brussels is chafing under criticism of its centralised vaccine licensing and procurement system, which has seen the EU fall behind post-Brexit Britain in its inoculation drive.

"If [AstraZeneca] does more, we don't have any issue, but as long as it doesn't deliver its commitment to us, the doses stay in Europe — except for Covax," Breton said, referring to the WHO-supported programme to supply vaccines to developing nations.

Breton was the EU official who reportedly "discovered" a stockpile of 29 million doses of the Oxford jab at a bottling plant in Italy in March — after inspecting the HALIX plant in the Netherlands where the European Medicines Agency has not yet approved production for medical use.

However, even former EU Brexit negotiator Michel Barnier — a fellow Frenchman who sought to punish the UK for leaving the bloc during last year's trade talks — said cooperation was better than competition.

“It is true that the UK has a quicker vaccination rate compared to the EU," Barnier said. "But the fight against COVID 19 is more than speed of vaccination, important as that is… We will all find strong and weaker points in how we managed this. But there is no place, in such a serious situation, for polemics and competition. There are so many more reasons to cooperate, in the short and the long term.”

In February, MEP and former Belgian PM Guy Verhofstadt wrote that the true reason for Brussels' problem with AstraZeneca was the sloppy wording of its contract. Verhofstadt said that key details of the UK contract, signed a day later than the EU's, tilted the "balance of power" towards Westminster.

According to the latest Department of Health figures, the UK has so far vaccinated nearly 31 million people out of a population of nearly 67 million, with over four million — or six per cent — having their booster jab already. The EU has given first doses to just 11.5 per cent of its population so far, a quarter of the UK proportion. That has led to widespread criticism of European Commission President Ursula von der Leyen, especially in her homeland Germany.