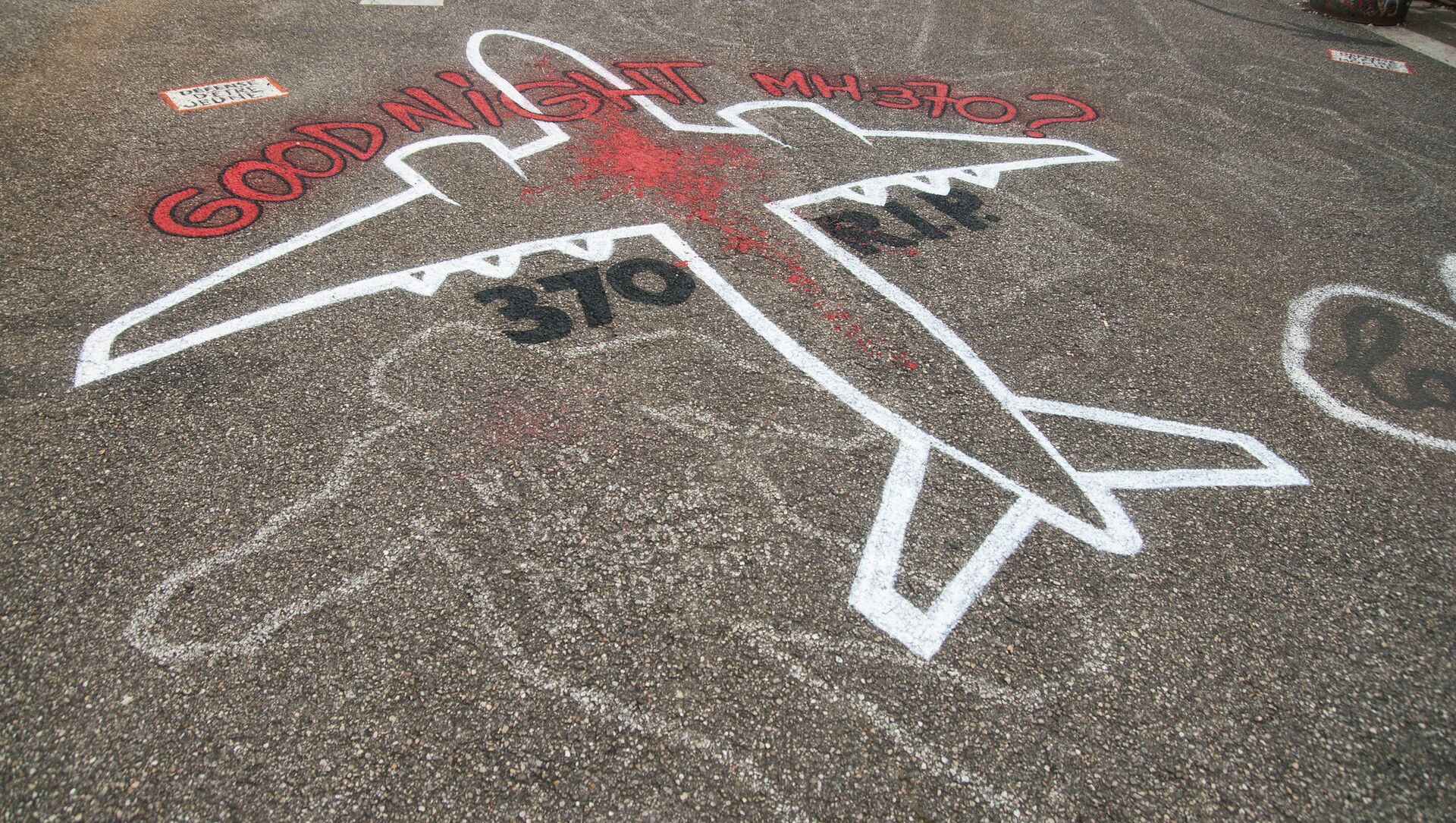 CC BY 2.0 / thierry ehrmann / Good Night MH370
Subscribe
Andrei Dergalin
All materialsWrite to the author
The plane’s disappearance from radar screens could have been caused by US early warning aircraft, De Changy reportedly postulates.

The mysterious disappearance of Malaysian Airlines Flight MH370 seven years ago has got yet another potential explanation, as investigative journalist Florence de Changy suggests that a certain branch of the US Armed Forces may have had a hand in that tragedy.

In her book, titled "The Disappearing Act: The Impossible Case of MH370", De Changy argues that the airliner was actually carrying a shipment of "electronic equipment" to China, and that US Air Force sought to intercept this cargo, according to the Sun.

The book reportedly claims that the airliner vanished from radar screens due to tracking technology being intercepted during the course of that operation, with two US Airborne Early Warning planes moving to block the target plane’s magnetic field.

After an attempt to reroute the airliner’s course failed, the airliner was shot down, and "the matter has been feverishly covered up ever since," as the newspaper puts it.

Search for Missing MH370 Could Reportedly Resume Due to Fresh Evidence

"The shooting down could have been a blunder, but it could have also been a last resort to stop the plane and its special cargo from falling into Chinese hands," De Changy reportedly states.

Malaysia Airlines Flight MH370 disappeared from radar with 239 passengers and crew on board on 8 March 2014, during a handover from Malaysian to Vietnamese air traffic controllers.

Despite the abundance of theories about what happened to the airliner, its ultimate fate currently remains unknown.

000000
Popular comments
Two other theories are.. that the M370 was auto-hijacked to Diego Garcia, just for these nano defense/offense weapons and the 22 Ch. scientists aboard. This was from a message from an IBM employee who had smuggled a 2nd, un-confiscated cell phone after debarking, calling his G/F. Another theory.. with the relevant radar chart data now removed.. but originally published in Global Research,, showed 370 making sharp turns to left and right, then dropping to sea level at impossible rate, then shooting forward at high speed, then disappearing. On that same active radar chart, a giant UFO had shot across the screen at 2K mph and stopped in the top right corner.. so a possible ET abduction.. much like the young Cessna Pilot Valentich out of Melbourne. Here . ''Disappearance of Frederick Valentich - Wikipedia''. 3 juicy conspiracy theories.. take your pick,, one of them has to be CORRECT! I'll take the abduction case by curious ets, who we've been told visit from 30 different regions every year.. that told us by et, of course in theyfly dot com.
TommyT
28 March, 14:54 GMT4
000000
Rokenbok, Yeah, pretty much summed it up!

What, me worry
28 March, 14:54 GMT5
000000
Newsfeed
0
New firstOld first
loader
LIVE
Заголовок открываемого материала
Access to the chat has been blocked for violating the rules . You will be able to participate again through:∞. If you do not agree with the blocking, please use the feedback form
The discussion is closed. You can participate in the discussion within 24 hours after the publication of the article.
To participate in the discussion
log in or register
loader
Chats
Заголовок открываемого материала
Worldwide
InternationalEnglishEnglishMundoEspañolSpanish
Europe
DeutschlandDeutschGermanFranceFrançaisFrenchΕλλάδαΕλληνικάGreekItaliaItalianoItalianČeská republikaČeštinaCzechPolskaPolskiPolishСрбиjаСрпскиSerbianLatvijaLatviešuLatvianLietuvaLietuviųLithuanianMoldovaMoldoveneascăMoldavianБеларусьБеларускiBelarusian
Transcaucasia
ԱրմենիաՀայերենArmenianАҧсныАҧсышәалаAbkhazХуссар ИрыстонИронауОssetianსაქართველოქართულიGeorgianAzərbaycanАzərbaycancaAzerbaijani
Middle East
Sputnik عربيArabicArabicTürkiyeTürkçeTurkishSputnik ایرانPersianPersianSputnik افغانستانDariDari
Central Asia
ҚазақстанҚазақ тіліKazakhКыргызстанКыргызчаKyrgyzOʻzbekistonЎзбекчаUzbekТоҷикистонТоҷикӣTajik
East & Southeast Asia
Việt NamTiếng ViệtVietnamese日本日本語Japanese中国中文Chinese
South America
BrasilPortuguêsPortuguese
NewsfeedBreaking
16:47 GMTRussia, Egypt Start Naval Phase of 'Bridge of Friendship-2021' Drills in Mediterranean
16:40 GMTBiden Administration Reportedly Mulls Cutting Russia Off SWIFT, Sanctions Against Energy Producers
16:37 GMTFinland’s PM Parties at Nightclub Until 4am After Contact With COVID-Positive Official
16:14 GMTSecond Week of Ghislaine Maxwell Sex Scandal Trial Kicks Off
15:56 GMTBoost for Britain! Is the UK’s COVID-19 Third Jab Campaign Saving Lives?
15:55 GMTWestminster Preparing 10-Year War on Drugs in Attempt to Defeat County Line Gangs
15:44 GMTIsrael Will Reportedly Push US to Strike Iranian Facility Amid Lack of Progress in Vienna Talks
15:41 GMTAmerica Unveils First-Ever Strategy to Battle Corruption at Home and Abroad
15:30 GMTChina May Build Military Base in Equatorial Guinea Amid Beijing’s Tensions With Washington
15:15 GMTKremlin: Putin Will Listen to Biden's Proposals on Ukraine 'With Great Interest'
15:15 GMTNYC to Use 'Preemptive Strike' Against Omicron With Vaccine Mandate for all Businesses, Mayor Says
15:08 GMT3,000 Security Officers Guard India's Mathura as Hindu Group Threatens to Install Idol in Mosque
14:59 GMTAmid Rumours of US Boycott of Beijing Olympics, How Could the Move Affect the Games?
14:52 GMTUK Policing Minister Not Surprised Over Reports of Drug Use in Parliament Building
14:45 GMTLabour Unions Protest in Brussels Against Low Wages, Expensive Electricity - Photos
14:26 GMTSpanish Court Rules Employee Can be Fired for Job Abandonment During Pandemic - Reports
14:18 GMTAnger and Shock After Intruders Vomit and Urinate at Site of Manchester Arena Bombing Memorial
14:15 GMTUS, UK, Canada Concerned by Tigrayans Arrested Without Charge in Ethiopia
14:07 GMTLionel Messi, Neymar or Himself: Kylian Mbappe Reveals Who's 'Boss' at Paris Saint-Germain
13:58 GMTFormer Indian Shia Leader Embraces Hinduism After 'Death Threats From Muslim Groups'