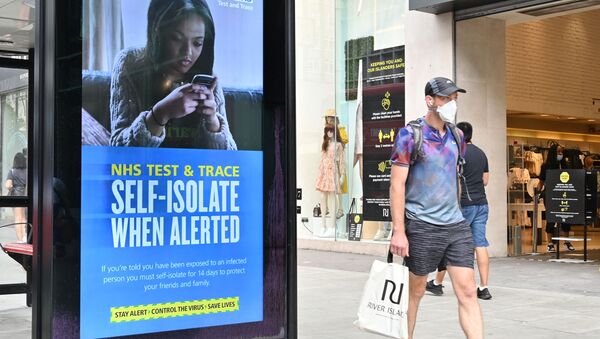 The global death toll from the coronavirus pandemic is now over 2.6 million, while the number of COVID-19 cases has surpassed 117 million worldwide, according to Johns Hopkins University.

MOSCOW (Sputnik) – Jamaica has launched the campaign of the vaccination against COVID-19 using the AstraZeneca drug, the Jamaica Information Service state portal said.

On Monday, the first batch of the AstraZeneca vaccine arrived in Jamaica from India.

“Public Health Nurse, Marcia Thomas-Yetman, is the first person in Jamaica to receive the coronavirus (COVID-19) vaccine,” the portal said on Wednesday.

Jamaica plans to vaccinate more than 17,000 healthcare employees within the first week of the campaign. Military and police officers will be the next group to receive the vaccine.

MOSCOW (Sputnik) – The number of people, who have died of the coronavirus in Brazil, has increased by record 2,286 to 270,656 over the past 24 hours, the national Ministry of Health said.

The number of confirmed cases has risen by 79,876 to 11,202,305 within the same period of time. More than 9.91 million people have recovered since the start of the outbreak.

"This is the second component of the vaccine to those that have already been applied. We express our gratitude to the Russian Federation and President Vladimir Putin for their support!" Ebrard wrote on Twitter.

WASHINGTON (Sputnik) - The United States will share coronavirus vaccines with other countries if it ends up with a surplus, US President Joe Biden told reporters.

“If we have a surplus, we are going to share with the rest of the world,” Biden said.

Biden vowed to have enough vaccines for every adult American by the end of May and directed the purchase another 100 million doses.

“We are going to start off making sure Americans are taken care of first. But we then are going to try and help the rest of the world,” Biden said.

BRUSSELS (Sputnik) - The European Medicines Agency said Wednesday there was no evidence to suggest that AstraZeneca vaccine doses from a specific batch led to a fatality and illness in three other people.

The EMA opened an inquiry after a woman in Austria was diagnosed with having blood clots and died 10 days after getting the shot, while another one was hospitalized with pulmonary embolism. Two more cases of thromboembolic events have since been confirmed for the batch.

"There is currently no indication that vaccination has caused these conditions, which are not listed as side effects with this vaccine," the drug regulator said in a statement.

The most recent of two Phase III trials included 769 high-risk patients, 511 of whom received the drugs and 258 who received a placebo, the release said.

"[The] therapy reduced risk of hospitalisations and death by 87 percent", the release said.

The trials also indicated the therapy is effective for newly emerging variants of the coronavirus, the release added.

Bamlanivimab and etesevimab together and bamlanivimab alone previously received emergency use authorisation by the Food and Drug Administration for treatment of mild to moderate COVID-19 in adults and children at least 12-years-old, according to the release.

Turkish volunteers have received the second dose of the homegrown ERUCOV-VAC COVID-19 vaccine candidate during the second phase of clinical trials, media reported on Wednesday.

According to the Anadolu news agency, the trials are being held in the Erciyes University, located in the central Turkish city of Kayseri.

One of the volunteers, Soner Akel, told the news agency that he had no side-effects after the second shot of the ERUCOV-VAC vaccine.

The university's rector, Mustafa Calis, said that Turkey planned to finish the second phase of the trials in mid-April.

The ERUCOV-VAC inactive vaccine has been developed by the Turkish Erciyes University together with the Institute of Health Administration. The country started clinical trials of the vaccine in early November, with 44 volunteers having participated in the first phase, while at least 250 volunteers will be inoculated during the second phase.

Vaccinated Americans continue to wear facemasks in public and avoid large crowds - basic COVID-19 protection measures recommended by US health officials, according to a new Gallup poll based on interviews conducted over the past two months.

"Vaccine recipients are just as likely as non-recipients to say they are wearing facemasks in public, consistent with guidance from the Centers for Disease Control and Prevention [CDC]", a press release explaining the poll said.

In addition, vaccinated Americans are just as likely as their unvaccinated peers to avoid large crowds, the release said.

Ninety-eight percent of fully vaccinated Americans say they continue to wear masks outside the home, 97 percent of partially vaccinated people say the same as do 98 percent of people who plan to be vaccinated but have yet to receive the first of two shots, the release also said.

Nearly identical percentages of the three groups also said they continue to avoid large crowds (82-to-84 percent) and also avoid travel (77-to-78 percent), the release added.

To some degree, the reluctance of vaccine recipients to alter behavior could reflect uncertainty about new coronavirus variants and how well the vaccines the variants, according to the release.

"Let's hope that the vaccination will go faster, and the situation will really change for the better", the president said during a video conference with members of the government.

Jordan’s health regulator on Wednesday issued an emergency use authorisation for Sputnik V, a Russian vaccine against COVID-19.

"On Wednesday, the organization for control over the quality of food and medicine allowed the emergency use of the Russian Sputnik vaccine", the regulator said in a statement.

The use of the Russian vaccine is already approved in nearly 50 countries.

"We have decided to implement the nationwide lockdown to make sure that there is no risk of it spreading further", said Nilen Vencadasmy, chairman of the Mauritius Tourism Promotion Authority.

Finland's state-owned railway company VR Group said that its passengers will have to wear face masks on all long-distance and commuter trains from 11 March.

"Due to deteriorated COVID-19 situation and clients' requests, VR has decided to make masks mandatory in long-distance and commuter trains", the company said on its website.

The company added that 65.5 percent of its clients wanted to wear masks on trains.

According to VR Group, only passengers with medical reasons may not wear masks.

On 1 March, the Finnish government declared a state of emergency amid the spike in COVID-19 cases and introduced a lockdown from March 8 to 28. Under the restrictions, all restaurants are closed, schools have switched to distant learning.

Finland has confirmed 63,889 COVID-19 cases, with 779 deaths. Over the past 24 hours, the country registered 779 new infections, according to the Finnish Institute for Health and Welfare.

Estonia Halts Use of AstraZeneca Vaccine Batch Until Complication Probe Over
09:26 GMT 10.03.2021

According to UK Transport Secretary Grant Shapps the test and trace system has helped limit the spread of new COVID variants.

MOSCOW (Sputnik) - Alaska has become the first US state to allow people aged 16 and over to be vaccinated against the coronavirus, Governor Mike Dunleavy announced on Wednesday.

"Effective immediately, Alaska will become the 1st state in the nation to allow anyone over the age of 16 to get the COVID-19 vaccine. This marks a significant step forward in our efforts to put the virus behind us", Dunleavy wrote on Twitter.

According to the New York Times, Pfizer's vaccine will be available to individuals aged 16 and older, while vaccines developed by Moderna and Johnson & Johnson are authorized for those aged 18+ only.

Alaska's Department of Health and Social Services says on its website that vaccination is available for "anyone living or working in Alaska who is age 16 or older." According to the website, around 119,600 Alaska residents, or 16 percent of the population, have completed their vaccination, while over 171,000 residents have received at least one shot.

The US' coronavirus tally has topped 29 million, with the death toll surpassing 527,600, according to the Johns Hopkins University. The country launched the nationwide vaccination campaign back in December. Three vaccines have been authorized for emergency use so far.

MOSCOW (Sputnik) - Germany's BioNTech and the US' Pfizer have the capacity of manufacturing up to three billion doses of their coronavirus vaccine next year, BioNTech CEO Ugur Sahin said in an interview with Bloomberg on Wednesday.

"In principle, we could further increase our manufacturing capacity. So I do not see a limitation why we should not be able to produce even three billion doses in 2022. And it really depends on the demand. It depends on factors, for example, whether additional boost vaccinations are required", Sahin said.

In early February, the biotechnology company announced its plans to produce two billion doses of the vaccine instead of the expected 1.3 billion doses in 2021 in light of increased global demand.

MEXICO CITY (Sputnik) - Panamanian President Laurentino Cortizo said he had received the first dose of a coronavirus vaccine as part of the country's vaccination program.

"I received my first dose of the COVID-19 vaccine at Belisario Porras School... I am proud of the great team that is hosting the biggest vaccination day in history", the 68-year-old politician wrote on his Twitter.

Currently Panama residents over 60 are being immunised against COVID-19.

Panama currently uses the coronavirus vaccine by Pfizer/BioNTech for vaccination. In February, the Russian Embassy in the Central American country told Sputnik that Panama also intended to purchase Sputnik V and that the country's Ministry of Health was holding talks about that.

Overall, 345,236 cases of COVID-19, including 5,934 fatal cases, have been reported in the Central American country with a population of 4.2 million.

"We just finished a meeting with the CEO of the Russian Direct Investment Fund and he has sent us the contract, it is signed. We already bought 4.2 million vaccine doses", Hernandez said, as quoted by his office in a tweet.

The Central American country registered the Russian vaccine through a fast-track procedure on 25 February. Sputnik V is currently authorised for use in over 40 countries, with a total population of more than 1.2 billion people.