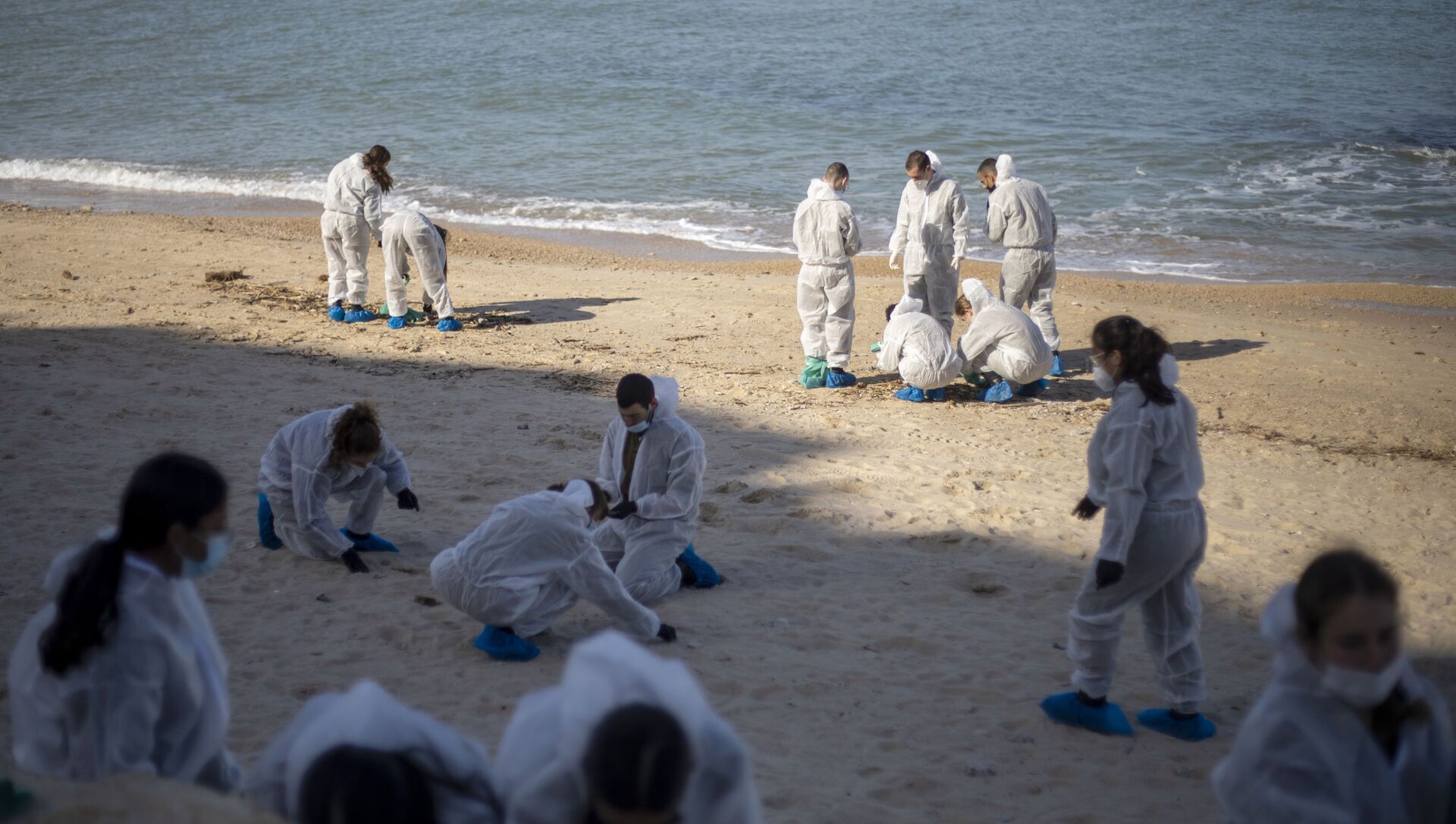 Gaby Arancibia
All materialsWrite to the author
Thousands of volunteers and soldiers in Israel recently came together to clear the remnants of an oil spill that saw massive globs of tar wash up along the Israeli state’s Mediterranean coastline. Amid the ongoing cleanup efforts, unsubstantiated claims that Iran deliberately caused the spill have run rampant.

Despite unfounded claims being voiced by Israeli government officials, a new report conducted by the state’s Channel 12 has recently determined that investigators have found no evidence to support allegations that Iran carried out “environmental terrorism” against its longtime foe.

Citing the Channel 12 findings, The Times of Israel reported the state’s Environmental Protection Ministry (EPM) has already handed over its final report on the disaster to government security agencies, which have noted that there is no proof to support that the spill was conducted on purpose.

The investigative report by the Israeli station also indicated that the country’s intelligence agencies were being tapped to dig further into the baseless anti-Iran allegations that have even been voiced by Environmental Protection Minister Gila Gamliel, who initially stated the spill did not appear to be calculated before changing her opinion.

Earlier, The Jerusalem Post reported that officials with both the Mossad and the Israel Defense Forces were “blindsided” by Gamliel’s accusations, as well as “frustrated by the lack of coordination within the government.”

Although Gamliel has not provided evidence herself, or indicated how she arrived at her conclusion, she told reporters at a Wednesday news conference that Iran committed “environmental terror.”

“Now we have found that Iran doesn’t only carry out terror via nuclear weapons or via attempts to establish a presence on our borders. Iran carries out terrorism by damaging the environment,” she alleged.

On Thursday, Gamliel appeared on Army Radio and reiterated her claims, saying, “to say this isn’t terror is simply inappropriate.” Gamliel claims, however, have also been supported by David Yahalomi, the director-general of the EPM.

Iranian officials have yet to respond to the allegations; however, environmental group Greenpeace has rejected the claims and stated Gamliel’s assertions are “outrageous and factually baseless at this stage.”

“[The claim] is minimizing the well-known and widespread phenomenon of marine pollution by ship oil spills. The minister’s conduct on the matter smells of electioneering and an attempt to score political points over an ecological disaster,” the statement added.

Globules of tar first began to appear on Israel’s coastline on February 19, after a winter storm pushed the slick to the shore. Estimates suggest some 1,000 tons of tar have reached the coast, causing irreversible damage. Tar has also emerged along parts of Lebanon’s coast.

It’s believed the oil may have spilled from the Emerald, a Libyan-owned ship that was transporting oil from Iran to Syria. Iranian oil tankers have increasingly been accused of illegally smuggling oil out of the country after the US withdrew from the 2015 Joint Comprehensive Plan of Action, and saw strict sanctions imposed, including on its oil sector.