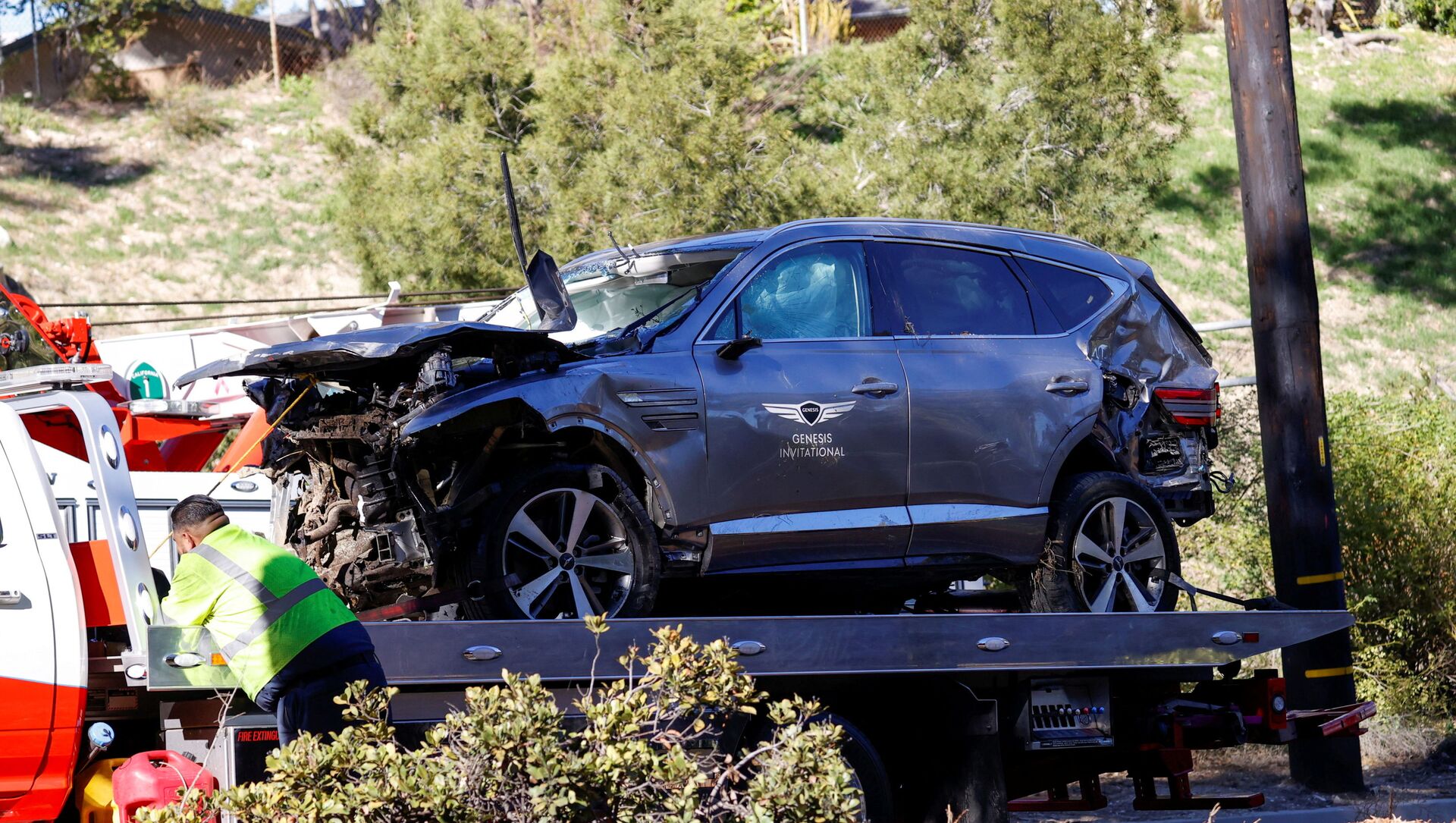 Gaby Arancibia
All materialsWrite to the author
Professional golfer Tiger Woods was in Los Angeles, California, for the annual Genesis Invitational golf tournament at the Riviera Country Club, according to TMZ.

Woods was hospitalized early Tuesday after being involved in a serious single-car accident in the Los Angeles-area that saw law enforcement officials use emergency tools to remove him from his vehicle.

A release from the California’s Los Angeles County Sheriff’s Department states that the accident unfolded at approximately 7:12 a.m. local time, near the Rolling Hills Estates and Rancho Palos Verdes. Woods was the only passenger in the vehicle.

“Mr. Woods was extricated from the wreck with the ‘jaws of life’ by Los Angeles County firefighters and paramedics, then transported to a local hospital by ambulance for his injuries,” the police statement reads. It was later clarified by officials at a news briefing that the so-called "jaws of life" package was not used, with first responders instead using an axe and a Halligan tool.

The accident was described as a “roll-over traffic collision.” Woods, who was conscious and wearing a seatbelt when emergency officials arrived at the scene, was taken to the Harbor-UCLA Medical Center.

Mark Steinberg, Woods' agent, told TMZ that the champion golfer sustained multiple injuries to his leg, and is currently in surgery. Daryl Osby, the chief of the LA County Fire Department, told reporters at the Tuesday briefing that Woods had serious injuries to both of his legs, and that he was not airlifted from the scene. 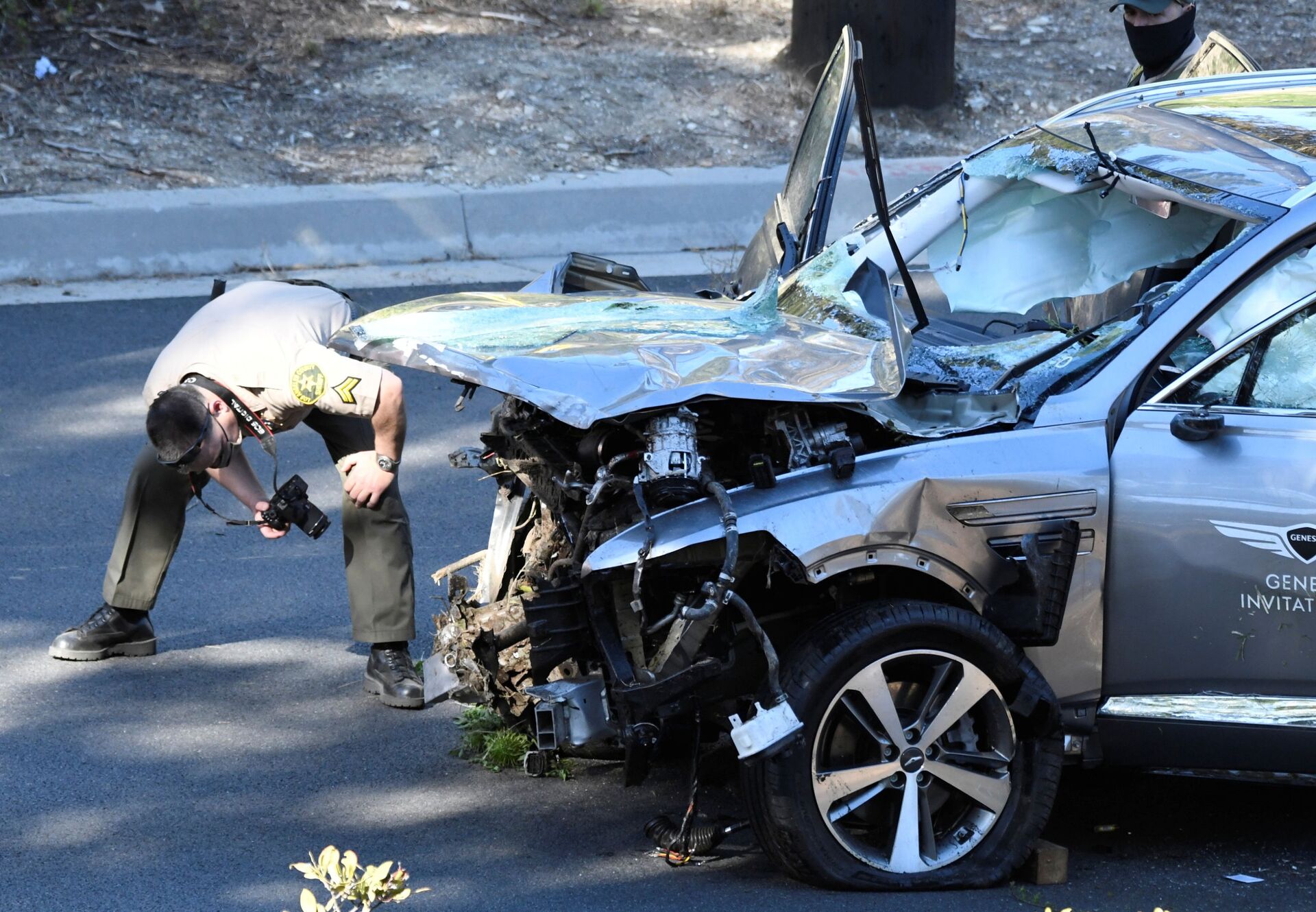 Los Angeles County Sheriff's Deputies inspect the vehicle of golfer Tiger Woods, who was rushed to hospital after suffering multiple injuries, after it was involved in a single-vehicle accident in Los Angeles, California, U.S. February 23, 2021.
© REUTERS / GENE BLEVINS

Although the cause of the accident has not yet been determined, a law enforcement source informed Bill Melugin, a correspondent for local station Fox LA, that there is nothing "salacious" about the crash, and that officers are solely investigating a "bad traffic accident" at the moment. A source for the LA Times, also indicated that Woods was driving at high speeds and lost control of his vehicle while "crossing the center divider."

Alex Villanueva, the sheriff of the Los Angeles County Sheriff's Department, told reporters that there was no evidence of any impairment. He also indicated that a second accident occurred shortly afterward that involved onlookers. No injuries were reported.

An investigation is currently being carried out by the sheriff’s department’s Lomita Station. An official report on the Tuesday crash may be released within the next several days by investigators.

Woods was previously involved in a pair of accidents in Florida in 2009 and later in 2017. His 2017 accident led to his arrest in Jupiter, Florida, after officers found him asleep in the driver's seat. Woods later said the incident was caused by a reaction to prescribed medications.

Top-ranked golfer Justice Thomas addressed reports of the car accident and told reporters that he felt "sick to my stomach," as he was also "worried" for Woods' kids. He added, "It hurts to see, now one of my closest friends get in an accident and I just hope he’s alright."

Former US President Donald Trump also issued a statement calling on Woods to "get well soon."

In follow-up remarks to Fox News, Trump reflected on the day he awarded Woods the Presidential Medal of Freedom in May 2019 and said he had "no doubt" the golf legend would recover from the accident.

Earlier, ​Woods was spotted in photos with former Miami Heat basketball star Dwyane Wade and actor David Spade while out on the green in the Sunshine State.