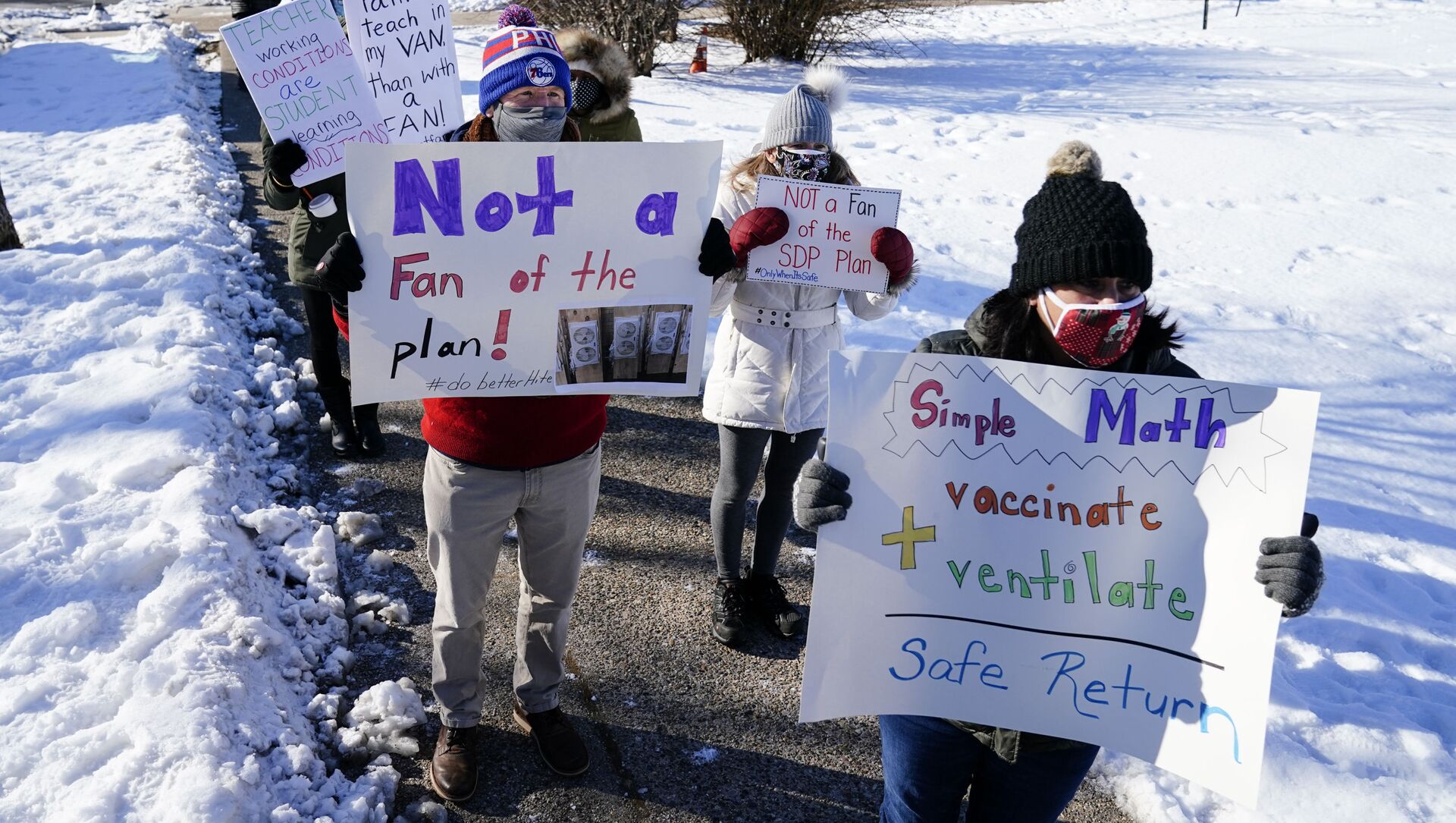 © AP Photo / Matt Rourke
Subscribe
International
India
Africa
Morgan Artyukhina
All materialsWrite to the author
The US government has pushed for students to return to in-person learning beginning summer 2020, in part because an estimated one-third of the US workforce, or 50 million people, are parents who cannot return to work while their children are learning at home.

The US Centers for Disease Control and Prevention (CDC) is expected to soon issue new guidelines on safely reopening schools amid the ongoing COVID-19 pandemic. The Biden administration has made reopening a priority, but it has encountered significant resistance from communities and teachers’ unions.

According to CNN, the new guidelines are expected to include hand washing, masking, social distancing, cleaning and ventilation, as well as contact tracing, isolation and quarantine. The agency is not expected to recommend that all staff be vaccinated beforehand, but to incorporate vaccination as just another “layer” of defense.

Early detection of COVID-19 cases, including asymptomatic cases, will be a top priority, but the news outlet gave no details about how the government will recommend accomplishing their task, aside from rigorous testing.

The CDC previously revised school safety guidelines in July 2020, amid heavy pressure from central Trump administration figures who pushed for public schools to reopen in the fall. The CDC previously maintained extremely strict guidelines, but later fell into line with a set of recommendations that closely resembled the stance of then-Education Secretary Betsy DeVos, who sought to quickly open schools.

The Trump administration was motivated, in large part, by the desire for parents to return to work, which for tens of millions of workers is not possible while underage children learn remotely at home. One study in July suggested that roughly 50 million workers, or one-third of the US workforce, was affected by the circumstance.

The new CDC director, Rochelle Walensky, has maintained the agency’s position, saying at a White House briefing last week that "school should be the last places closed and the first places open.” 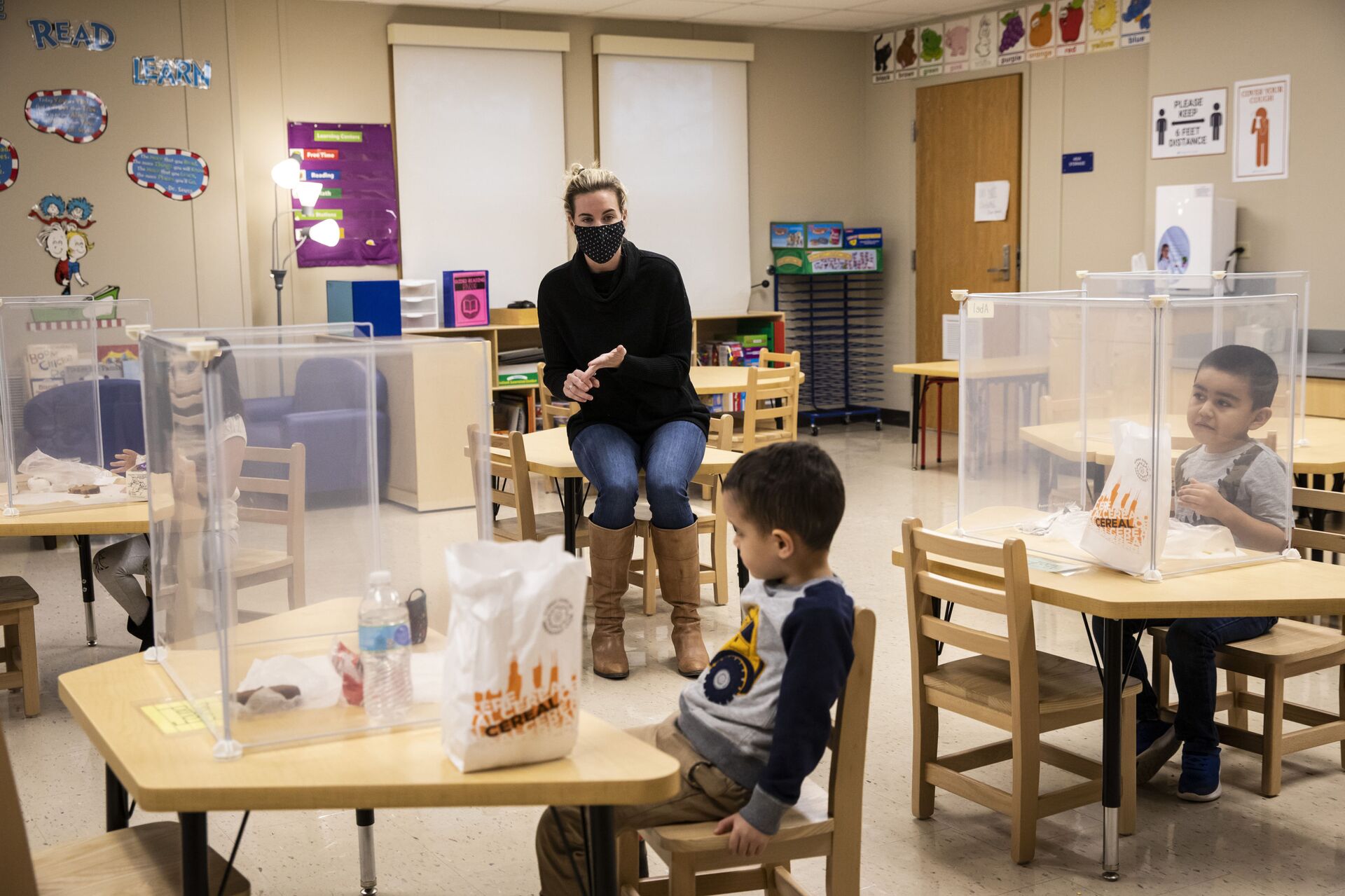 A CDC study published last month, on the effects of COVID-19 community spread due to in-person teaching, found that “there has been little evidence that schools have contributed meaningfully to increased community transmission.”

The study notes that in several communities studied across the US, within-school transmission rates were noticeably lower than community transmission rates. It noted several examples where this was not the case, but faulted inadequate safety measures, including crowded rooms, exemptions from mask-wearing, and inadequate ventilation systems that simply recycled the same air instead of purifying or replacing it.

The study did not, however, investigate the effects of COVID-19 infections at school on a wider community spread, which many critics have noted is the greater danger, since children can bring the virus home and pass it to other family members. Another study published last month in Pediatrics found that while children often suffered less severe symptoms of COVID-19 than adults in their household, their likelihood of spreading it was equally high.

A school districts’ ability to meet those safety standards cannot be taken for granted, though. Many school districts pushed back on the fall 2020 reopening, citing inadequate safety measures, and some quickly backed off of their reopening plans when new COVID-19 outbreaks began almost immediately.

In the nation’s capital, District of Columbia Public Schools (DCPS) did not attempt to open until November 2020, but even those plans were pushed back after teachers, parents and community members rallied against it, saying in particular that school ventilation systems had not even had prior inadequacies addressed, much less brought up to COVID-19 safety specifications.

Washington Teachers Union says the school cannot open #UntilItsSafe & is joined by other groups, including Labor Against Racism & War. 21 other schools are taking part in this protest! pic.twitter.com/H5EDaIW089

​​"Most schools, especially those attended by Black, brown, indigenous, and poor White students have severely outdated ventilation systems and no testing or tracing programs to speak of," said National Education Association President Becky Pringle to CNN on Thursday.

"We need to ensure that we have the additional funds to help our more marginalized students and schools, because we're digging out of a hole here," Pringle stated, adding, "here we are with outdated ventilation systems - sick buildings - that we want to send kids back into with the coronavirus still raging."

'We Want to Come Back When It's Safe'

Schools in DC partially reopened on February 1, but after a week of classes, less than 10,000 of the 15,000 eligible student slots had been filled, according to the Washington Post, which noted that five elementary schools had already each sent a class home for a 14-day quarantine period after a student had tested positive for COVID-19.

On Thursday, Chicago Public Schools and the Chicago Teachers Union reached an agreement about reopening the city’s schools that will see kids return in staggered groups based on grade, with high schoolers continuing to learn remotely.

“I think the real test of whether or not CTU was successful in negotiating a better plan is going to be whether or not we see more (students) return,” teacher James Klock told the Chicago Tribune. “Now the safety committees, the mechanism by which this agreement is to be upheld, now those need to form immediately and start working to share power between administrators and educators.” 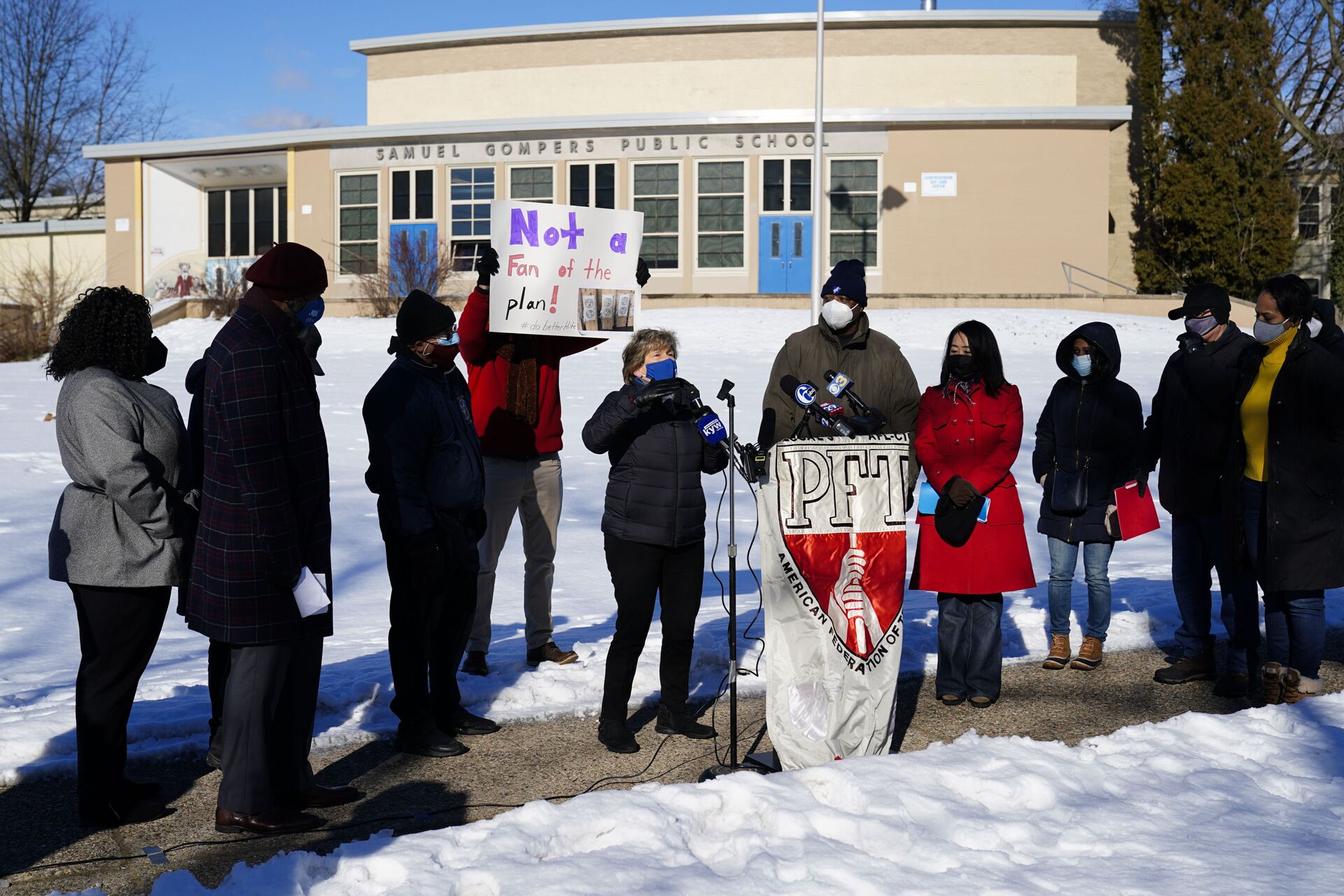 The move followed a vote of no confidence in Chicago Mayor Lori Lightfoot and CPS CEO Janice Jackson by the teacher's union earlier this week because “it has taken almost a year of effort just to extract the most basic enforceable safety guarantees from a school district with a dismal record of broken promises,” the union said in a statement.

When CPS attempted to reopen last month, just 20% of eligible students showed up, reflecting widespread hostility to the move.

In Philadelphia, Pennsylvania, last week, the Philadelphia Federation of Teachers refused to return to in-person teaching, protesting outside of school buildings as they awaited the judgment of a neutral third-party assigned to evaluate the city’s safety upgrades. Similarly to Chicago, just 8% of students eligible to return have actually registered to do so, according to the Philadelphia Inquirer.

“We want to work,” Elanda Tolliver, an educational assistant at a city school, told the paper. “But we want to come back safe. That’s all we’re asking.”