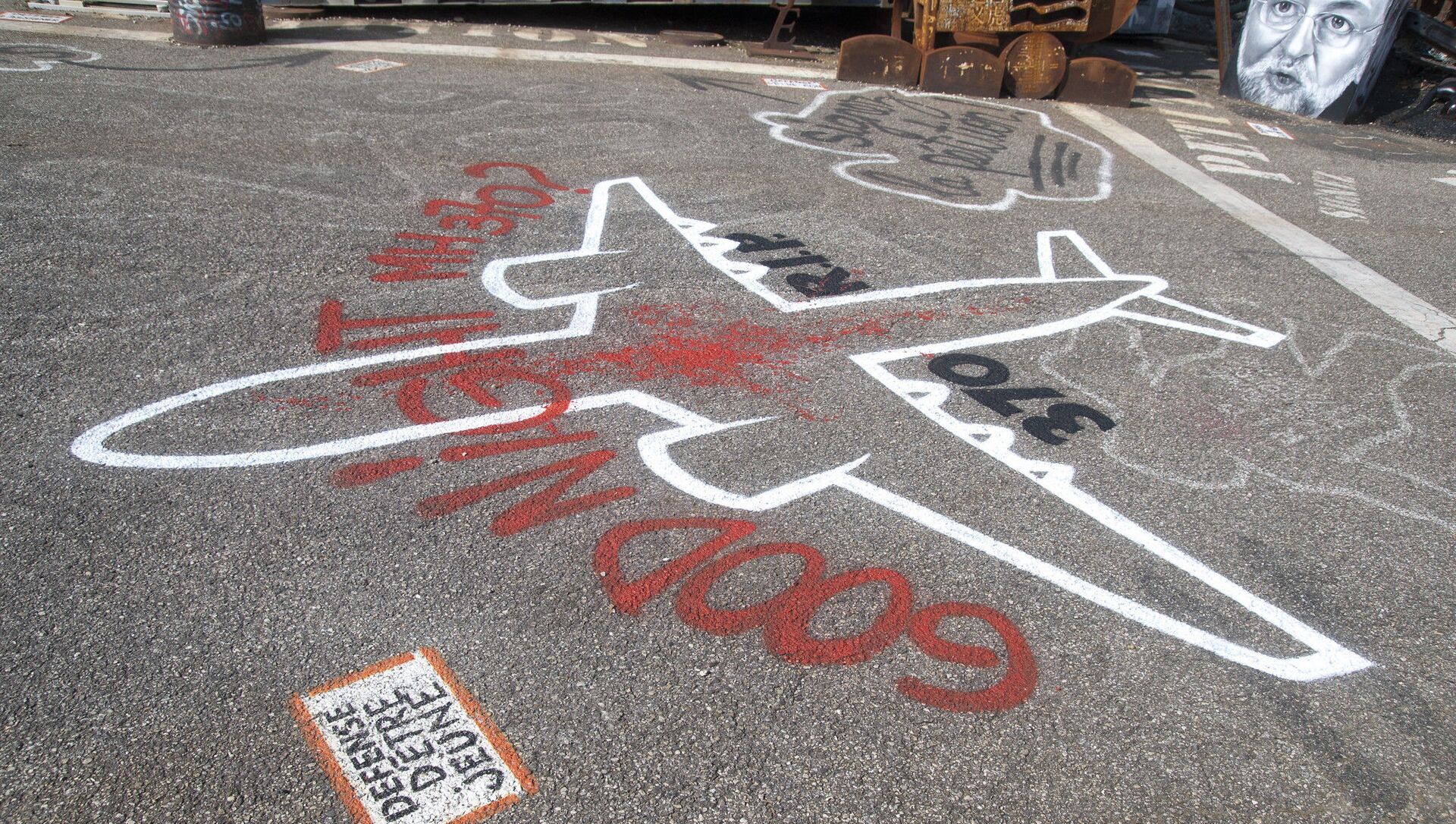 CC BY 2.0 / thierry ehrmann / Good Night MH370 DDC_0046
Subscribe
Andrei Dergalin
All materialsWrite to the author
Because the airliner’s signals “faded in stages,” the journalist argues that it might’ve been caused by interference by “an AWACS plane which can throw a blanket around an aircraft to block out its signals."

Nearly seven years after the disappearance of the Malaysian Airlines passenger jet flying from Kuala Lumpur to Beijing, investigative journalist Florence de Changy has highlighted a number of circumstances which may shed light on the mystery.

Citing de Changy’s new book The Disappearing Act: The Impossible Case of MH370, the Daily Express notes that Matthias Chang, a former advisor to Malaysian Prime Minister Mahathir Mohamad, told the author that two "major military training exercises" were taking place "in the area where MH370 went missing, right about the same time" – Cobra Gold and Cope Tiger. He says the US was taking part in both.

"The Cobra Gold exercise had been organised jointly by Thailand and the US every year since 1982, and involved several thousand American military personnel," de Changy remarks. "These war games included drills on land and at sea, mock beach landings, live-fire exercises, search and rescue missions, and humanitarian aid drills for natural disaster scenarios. Over the past 10 years or so, what began as a Thai–American exercise had widened to include Indonesia, Malaysia, Singapore, South Korea, and Japan."

And while the author questions why these regional partners didn't coordinate to help find the plane, Chang is quoted in the book as saying "ironically, the theme of the 2014 Cope Tiger exercise was search and rescue," the newspaper adds.

According to Sarawak Report, de Changy points at a possible explanation for how the airliner could’ve vanished from radar and stopped emitting signals like it did at the time of its disappearance. She explains that the plane’s signals "faded in stages," which may indicate "interference, most likely by an AWACS plane which can throw a blanket around an aircraft to block out its signals."

"At that point the only entity the pilot would be able to clearly communicate with would be the AWACS command itself," she writes, noting that if a foreign plane was instructing the airliner’s captain to change course or land, the latter might have "considered himself to be under hijack and refused to cooperate." This, she argues, might explain the "Tango" signal – "the code alert that you trigger as a pilot when your plane has been hijacked" – that several planes in the vicinity allegedly received from MH370.

With the airliner approaching Chinese airspace, the situation "would inevitably have escalated," possibly to a point where "shots may have been fired from a number of sources, including defensive fire against unidentified incoming aircraft," de Changy writes.

Being hit by a missile would also explain the "impending disintegration warning that was the last recorded message from MH370 to air traffic controllers in North Vietnam," with the author adding that MH370's captain attempted to "ditch the aircraft in shallow seas near to the Vietnamese coast to try to save his passengers." She says that this would explain "the debris reported on beaches along the North Vietnamese coast over the following couple of days before the search turned south and Vietnam went silent on the story."

Malaysia Airlines Flight MH370 disappeared from radar with 239 passengers and crew on board on March 8, 2014, during a handover from Malaysian to Vietnamese air traffic controllers.

And while there are plenty of theories about what happened to the airliner, its fate remains unknown.

Speckmade
7 February, 16:28 GMT3
000000
The US shoot the plane down.
Truth-Teller
7 February, 16:33 GMT9
000000
Newsfeed
0
New firstOld first
loader
LIVE
Заголовок открываемого материала
Access to the chat has been blocked for violating the rules . You will be able to participate again through:∞. If you do not agree with the blocking, please use the feedback form
The discussion is closed. You can participate in the discussion within 24 hours after the publication of the article.
To participate in the discussion
log in or register
loader
Chats
Заголовок открываемого материала
Worldwide
InternationalEnglishEnglishMundoEspañolSpanish
Europe
DeutschlandDeutschGermanFranceFrançaisFrenchΕλλάδαΕλληνικάGreekItaliaItalianoItalianČeská republikaČeštinaCzechPolskaPolskiPolishСрбиjаСрпскиSerbianLatvijaLatviešuLatvianLietuvaLietuviųLithuanianMoldovaMoldoveneascăMoldavianБеларусьБеларускiBelarusian
Transcaucasia
ԱրմենիաՀայերենArmenianАҧсныАҧсышәалаAbkhazХуссар ИрыстонИронауОssetianსაქართველოქართულიGeorgianAzərbaycanАzərbaycancaAzerbaijani
Middle East
Sputnik عربيArabicArabicTürkiyeTürkçeTurkishSputnik ایرانPersianPersianSputnik افغانستانDariDari
Central Asia
ҚазақстанҚазақ тіліKazakhКыргызстанКыргызчаKyrgyzOʻzbekistonЎзбекчаUzbekТоҷикистонТоҷикӣTajik
East & Southeast Asia
Việt NamTiếng ViệtVietnamese日本日本語Japanese中国中文Chinese
South America
BrasilPortuguêsPortuguese
NewsfeedBreaking
17:32 GMTKorean Treat and Eurovision Winner Among Most Mispronounced Words of 2021
17:24 GMTWhitehall Union Claims Victory After Court Dismisses its Case Against Johnson and Patel
17:14 GMTPope Francis Stumbles on Airstair as He Boards Plane in Greece - Video
17:02 GMTTrump’s Social Media Listing Vehicle Says Under Inquiry From US Securities Investigators
16:47 GMTRussia, Egypt Start Naval Phase of 'Bridge of Friendship-2021' Drills in Mediterranean
16:40 GMTUS Reportedly Mulls Cutting Russia Off SWIFT, Sanctioning Energy Producers & 'Putin's Inner Circle'
16:37 GMTFinland’s PM Parties at Nightclub Until 4am After Contact With COVID-Positive Official
16:14 GMTSecond Week of Ghislaine Maxwell Sex Scandal Trial Kicks Off
15:56 GMTBoost for Britain! Is the UK’s COVID-19 Third Jab Campaign Saving Lives?
15:55 GMTWestminster Preparing 10-Year War on Drugs in Attempt to Defeat County Line Gangs
15:44 GMTIsrael Will Reportedly Push US to Strike Iranian Facility Amid Lack of Progress in Vienna Talks
15:41 GMTAmerica Unveils First-Ever Strategy to Battle Corruption at Home and Abroad
15:30 GMTChina May Build Military Base in Equatorial Guinea Amid Beijing’s Tensions With Washington
15:15 GMTKremlin: Putin Will Listen to Biden's Proposals on Ukraine 'With Great Interest'
15:15 GMTNYC to Use 'Preemptive Strike' Against Omicron With Vaccine Mandate for all Businesses, Mayor Says
15:08 GMT3,000 Security Officers Guard India's Mathura as Hindu Group Threatens to Install Idol in Mosque
14:59 GMTAmid Rumours of US Boycott of Beijing Olympics, How Could the Move Affect the Games?
14:52 GMTUK Policing Minister Not Surprised Over Reports of Drug Use in Parliament Building
14:45 GMTLabour Unions Protest in Brussels Against Low Wages, Expensive Electricity - Photos
14:26 GMTSpanish Court Rules Employee Can be Fired for Job Abandonment During Pandemic - Reports