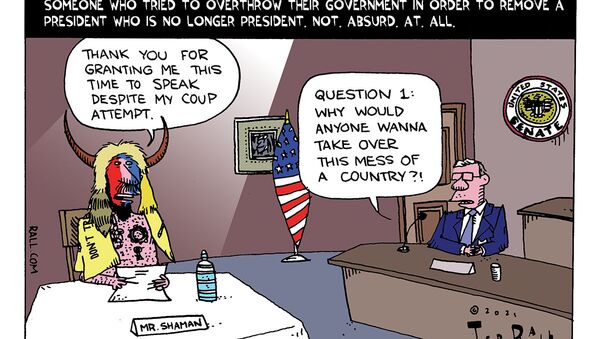 As former US President Donald Trump failed to grant pardons for his loyalists who were arrested after the deadly Capitol insurrection, many of his supporters have jumped ship, with some even considering taking a stand in the Senate impeachment trial against their former champion.

Jacob Chansley, known as the 'QAnon Shaman,' has reportedly informed his lawyer that he is willing to testify at Trump’s looming trial in the Senate chamber, as he now feels that he was “duped” by the former president.

Chansley’s lawyer, Albert Watkins, told the Associated Press that he has not yet reached out to Senate lawmakers, but feels that it’s important for officials to hear remarks by an individual who felt emboldened by Trump to act out against congressional efforts to certify the results of the US election.

The self-avowed 'shaman' is presently charged with civil disorder, obstruction of official proceedings, disorderly conduct in a restricted building and demonstrating in a Capitol building, among other violations. He has not yet entered a plea to the offensives.

So much for keeping your friends close and your enemies closer, eh?