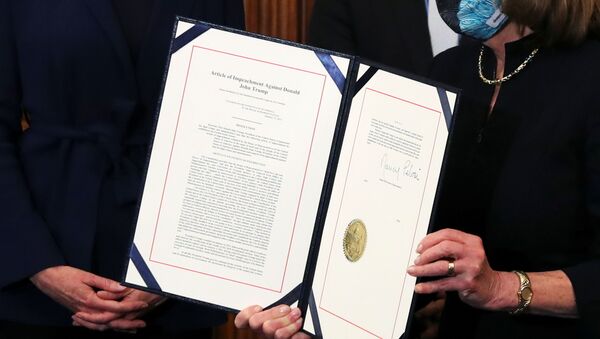 Mary F.
All materialsWrite to the author
Former US president Donald Trump is facing impeachment for the second time for the "incitement of insurrection" following the deadly Capitol riots on January 6. House Speaker Nancy Pelosi will send the article of impeachment against Trump to the Senate on Monday.

On Friday, Majority Leader Chuck Schumer announced on the Senate Floor that the Senate will begin Trump's impeachment trial the week of February 8.

"[Impeachment] presentations by the parties will commence the week of February the 8th," Schumer said.

The House of Representatives will deliver the article of impeachment to the Senate at 7 p.m. ET Monday, House Speaker Nancy Pelosi said in a statement.

​“It will be a full trial. It will be a fair trial,” Schumer said. “But make no mistake: There will be a trial, and when that trial ends, senators will have to decide if they believe Donald John Trump incited the insurrection against the United States.”

Senate Minority Leader Mitch McConnell had proposed delaying the start of the trial to mid-February to allow Trump time more time to establish a defense team, the Washington Post reported.

According to the Post, US President Joe Biden also supported the delay, stating that “the more time we have to get up and running to meet these crises, the better."

On January 13, Trump was impeached by the House for allegedly inciting his loyalists to breach the Capitol building in Washington, DC, on January 6 to protest against the certification of the Electoral College, which would have confirmed Joe Biden as the winner of the 2020 presidential election. The former president has denied the charges and said his remarks were "totally appropriate."

The US Department of Justice (DoJ) is currently working to bring sedition and conspiracy charges against some of the rioters who stormed the Capitol. Prosecutors have already charged more than 100 people involved in the insurrection.

Impeachment Article Against Trump Heads to Senate: Here’s What Happens Next
Trump is the only president in US history to face impeachment twice. On December 18, 2019, Trump was impeached by the House for abuse of power and obstruction of Congress after a formal House probe claimed that he had solicited foreign interference in the 2020 presidential election. The Senate acquitted Trump of these charges in February 2020. Only one Republican then voted in favor of one article of impeachment.

Although Trump is no longer president, the Senate could still convict him and vote to ban him from ever running for office again. However, the conviction is unlikely to occur, since it will take 67 votes in the 100-seat Senate to convict Trump on the impeachment charges. This would require 17 Republican senators to break rank.