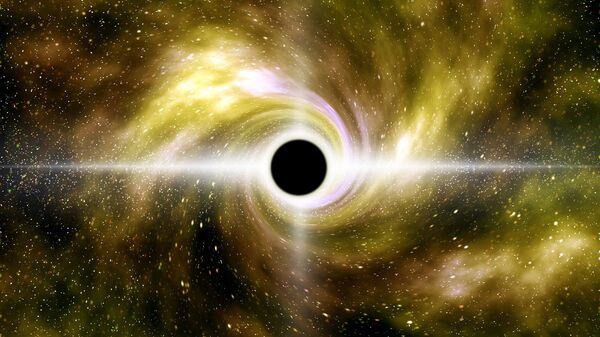 Andrei Dergalin
All materialsWrite to the author
The so-called "stupendously large black holes" are suspected to be truly ancient celestial bodies that may have formed long before galaxies.

While scientists have already discovered supermassive black holes (SMBHs) with masses anywhere up to ten billion times that of our own Sun, a bold new study suggests that even bigger such celestial bodies may exist.

According to phys.org, the study – by Queen Mary Emeritus Professor Bernard Carr from the School of Physics and Astronomy, together with F. Kuhnel (Munich) and L. Visinelli (Frascati) – focuses on how these so called "stupendously large black holes" (SLABs) form and the extent to which they might grow.

Supermassive black holes are believed to form within their host galaxies and grow by devouring matter from their surroundings or by merging with other black holes. The researchers propose that SLABs “could be 'primordial,' forming in the early Universe, and well before galaxies,” as phys.org puts it.

"We already know that black holes exist over a vast range of masses, with a SMBH of four million solar masses residing at the centre of our own galaxy," Carr said. "Whilst there isn't currently evidence for the existence of SLABs, it's conceivable that they could exist and they might also reside outside galaxies in intergalactic space, with interesting observational consequences. However, surprisingly, the idea of SLABs has largely been neglected until now."

While the suspected formation mechanism of supermassive black holes suggests a certain upper limit to their mass – "somewhat above ten billion solar masses" – the proposed "primordial" black holes are not a product of a star collapsing and their mass could vary from "very small" to "stupendously large," the media outlet adds.

Carr added that the scientists have some theories about how the SLABS might form and that he's hopeful their work "motivate discussions amongst the community."