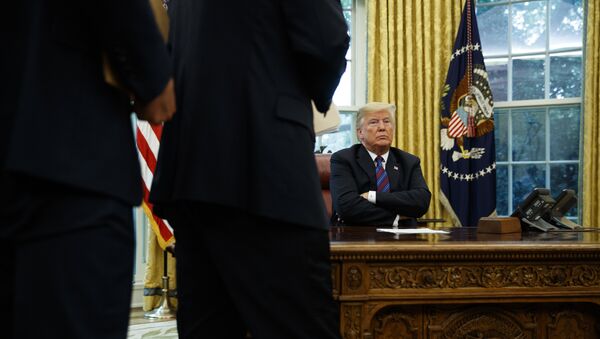 The red button on the US president’s desk was supposed to summon an aide whenever the president needed help. In 2017, it was revealed that then-President Donald Trump used this button to order a Diet Coke.

With the new US administration taking office, one little change has already been made to its interior. A small red button on a box atop the president’s Resolute Desk, which supplied Donald Trump with Diet Coke, appears to be gone.

President Biden has removed the Diet Coke button. When @ShippersUnbound and I interviewed Donald Trump in 2019, we became fascinated by what the little red button did. Eventually Trump pressed it, and a butler swiftly brought in a Diet Coke on a silver platter. It's gone now. pic.twitter.com/rFzhPaHYjk

This device has long been surrounded by all kinds of speculations about its purpose, with the most popular guess being that it was the nuclear button. However, in 2017 Donald Trump debunked this myth by pressing it – and thus summoning a butler that brought his favourite drink on a silver plate.

The button, however, was not Trump’s invention. Photos show that the 44th US President Barack Obama also used it to get himself a drink, but his choice was reported to be a little healthier – tea.

​Joe Biden was sworn in as 46th US president on January 20. On his first day in office, he signed several executive orders and delivered his first speech, addressing the COVID-19 pandemic, as well as the issues of immigration and climate change.