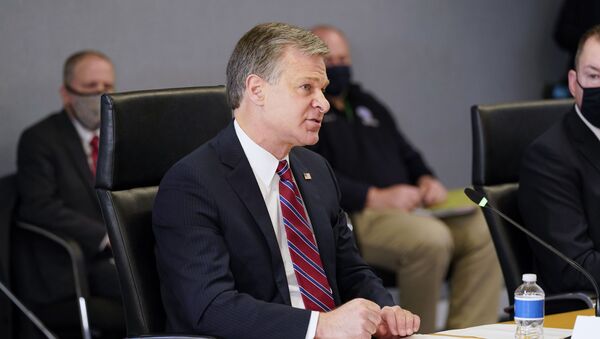 Lilia Dergacheva
All materialsWrite to the author
As Joe Biden took the reins of power at his inauguration on Wednesday, the Senate has yet to confirm any of his nominees to serve in his Cabinet, before moving on to the heads of agencies.

Newly sworn-in President Joe Biden is planning to keep Christopher Wray as FBI director, CNBC reported, citing a White House source. Like all FBI directors, Wray has a 10-year term. He was appointed by Donald Trump in 2017, but appeared to be at odds with the ex-president on a number of issues.

White House spokeswoman Jen Psaki was asked during a briefing on Wednesday if Biden had confidence in Wray, replying that she had not discussed this with the newly elected president.

"I have not spoken within him about specifically FBI Director Wray in recent days", press secretary Jen Psaki said, "but I'll circle back if there's more to convey".

Wray's team of federal investigators is currently scrutinising thousands of leads in a bid to prosecute people involved in the 6 January attack on the US Capitol and to try to prevent feared follow-up attacks in Washington and beyond.

Prior to the inauguration, Senate committees began Tuesday to hold confirmation hearings for five of Biden's picks: Janet Yellen, nominee for Treasury secretary, Avril Haines, nominee for director of national intelligence, Lloyd Austin, nominee for defence secretary, Tony Blinken, nominee for secretary of state, and Alejandro Mayorkas, who Biden tapped for the role of homeland security secretary. However, neither the respective committees with jurisdiction over each agency nor the full Senate has yet voted on the new president's Cabinet picks.

Republican Senator Rob Portman said on Wednesday afternoon that he believed there was "still uncertainty" about confirming the candidates for the Cabinet posts this week.

Democrats have a narrow majority in the Senate, meaning that Biden's nominees are likely to be confirmed. The balance in the Senate is 50-50, with Vice President Kamala Harris holding a tie-breaking vote.