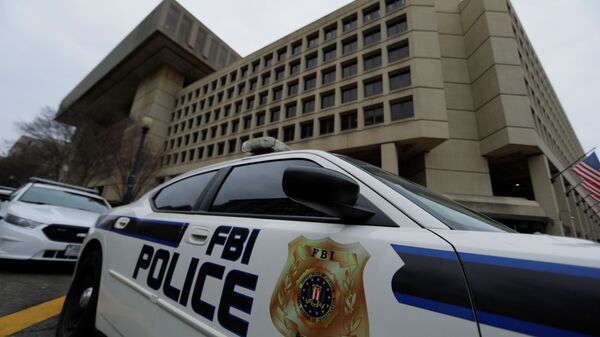 Evan Craighead
All materialsWrite to the author
Two days after the Capitol City riots and related protests over the Electoral College presidential vote certification, Steven D’Antuono of the FBI's Washington Field Office told reporters "there was no indication" of anything taking place “other than First Amendment-protected activity,” according to the Washington Post.

The Washington Post revealed in a Tuesday exclusive that a Federal Bureau of Investigation office in Norfolk, Virginia, issued a situational information report that warned of violence and "war" ahead of the deadly riots and storming of the Capitol building in Washington, DC, on January 6. At least five individuals died and dozens were injured.

“As of 5 January 2021, FBI Norfolk received information indicating calls for violence in response to ‘unlawful lockdowns’ to begin on 6 January 2021 in Washington. D.C.,” the document read, according to the WaPo. “An online thread discussed specific calls for violence to include stating ‘Be ready to fight. Congress needs to hear glass breaking, doors being kicked in, and blood from their BLM and Pantifa slave soldiers being spilled. Get violent. Stop calling this a march, or rally, or a protest. Go there ready for war. We get our President or we die. NOTHING else will achieve this goal.”

The outlet interpreted "BLM" to stand for Black Lives Matter and "Pantifa" as a derogatory term for "antifa, a far-left anti-fascist movement whose adherents sometimes engage in violent clashes with right-wing extremists."

Citing an FBI official familiar with the report, WaPo detailed that the document was drawn up and shared "within 45 minutes" of the Norfolk FBI office learning of the

“Individuals/Organizations named in this [situational information report] have been identified as participating in activities that are protected by the First Amendment to the U.S. Constitution,” the document reportedly read. “Their inclusion here is not intended to associate the protected activity with criminality or a threat to national security, or to infer that such protected activity itself violates federal law.

According to the document, an online comment suggested that “if Antifa or BLM get violent, leave them dead in the street." Meanwhile, another individual said those participating need “people on standby to provide supplies, including water and medical, to the front lines. The individual also discussed the need to evacuate noncombatants and wounded to medical care.”

This comes contrary to the Friday briefing delivered by D’Antuono. Speaking to reporters, the head Federal Bureau of Investigation (FBI) Washington field office argued "there was no indication that there was anything other than First Amendment protected activity."

This is really suspect as well:

The FBI was just paying a visit to extremists to warn them about Jan 6th?

Furthermore, a senior law enforcement official told NBC News the FBI and New York City Police Department relayed information to US Capitol police regarding the possibility of violence from the January 6 protests. The source also alleged that the FBI "visited more than a dozen extremists already under investigation to urge them not to travel to Washington."

News of these reorts come shortly after it was revealed that Anthony Quinn Warner, a 63-year-old Nashville, Tennessee, resident, who was the sole fatality in the Christmas Day detonation of his RV in the city's downtown area, was reported to authorities before his attack.

“I believe the officers did everything they could legally. Maybe they could have followed up more, hindsight is 20/20,” Metro Nashville Police Chief John Drake argued, noting that aside from a 1970s marijuana arrest, Warned had a "squeaky clean" record.