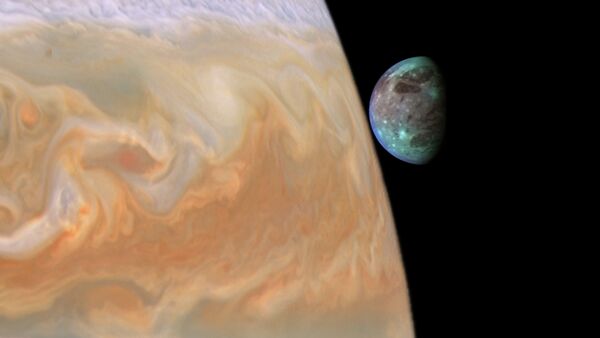 © Flickr / Gray Lensman QX!
Subscribe
International
India
Africa
Lilia Dergacheva
All materialsWrite to the author
Although alien transmission was ultimately dismissed as improbable, NASA's Ambassador to Utah Patrick Wiggins isn't losing hope of evidence arriving to prove there is someone out there.

The Juno spacecraft, orbiting Jupiter since 2016, has now spotted a unique FM signal, presumably originating from the moon Ganymede. No such detections were previously picked up from the largest and most massive of the Solar System's moons, ABC4 News reported.

Juno happened to cross the radio source when travelling across the gas giant's polar region - a place where magnetic field lines connect to the natural satellite.

In scientific terms, the process is typically referred to as "a decametric radio emission", with its underlying principle resembling such a currently indispensable part of our lives as wi-fi signal production.

According to Britannica.com, Jupiter's radio emissions were discovered in 1955, and over the past 66 years, more and more discoveries have been made about how the signals operate.

Despite the temptation to explain the signal with some alien reality, Patrick Wiggins, one of NASA's Ambassadors to Utah, asserted to ABC4 that this is "not E.T." saying "it's more of a natural function". "A member of the Salt Lake Astronomical Society once built an amateur radio telescope that could detect the electromagnetic radiation from Jupiter", he said referring to previous studies on the subject.

First Such Find From Ganymede: What Caused the Radio Emission?

NASA researchers believe electrons are responsible for the milestone radio emission that the spacecraft observed for merely five seconds while it was flying by at 50 km per second, or 111,847 mph. The phenomenon is considered to be a relative, albeit a shorter one, to the same physical process that causes auroras to happen on Earth.

Despite ruling out the alien version, Wiggins says he "does believe that life is out there", adding he is "still waiting for evidence to prove it".

NASA recently issued a statement saying Juno, which was scheduled to end its mission by deorbiting into Jupiter in July 2021, will enjoy an extension, together with the Mars InSight lander.

"The Senior Review has validated that these two planetary science missions are likely to continue to bring new discoveries, and produce new questions about our Solar System", director of NASA's planetary science division, Lori Glaze, stated.

It will now continue to scrutinise the gas giant and its interior structure, including magnetic fields until September 2025 or the end of its life, whichever comes first.

Late last year, NASA's Juno, which is now on its 29th pass of the planet, discovered that the legendary "hot spots" on the gas giant planet spotted by the Galileo spacecraft back in 1995 are wider and deeper than earlier models and observations found. The results of the research were made public on 11 December during the American Geophysical Union's annual fall conference, held online due to the coronavirus pandemic.