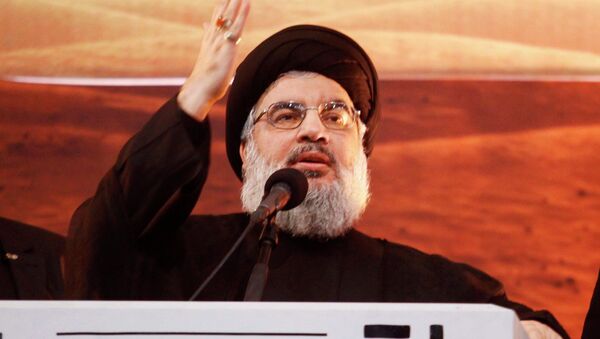 © REUTERS / Khalil Hassan
Subscribe
International
India
Africa
Ilya Tsukanov
All materialsWrite to the author
Democratic lawmakers are demanding Donald Trump’s immediate ousting in the wake of Wednesday’s attack on Congress in Washington, DC by his supporters. Some of Trump’s enemies are classifying the events as an attempted "coup." The president’s supporters claim the real "coup" took place in November through widespread vote fraud.

Hezbollah Secretary-General Hassan Nasrallah has weighed in on Wednesday’s unprecedented act of political insurrection in the heart of American power, suggesting America was now reaping just a taste of the kind of violence and chaos it's tried to sow in countries across the globe for years.

“We have warned about Trump’s policies many times before, and what we have seen is just a typical example of the crimes that he committed in Yemen, Syria, Iraq, Palestine, the siege of Iran and Venezuela,” as well as the assassinations of Quds Force commander Qasem Soleimani and Iraqi militia commander Abu Mahdi al-Muhandis, Nasrallah said in an address broadcast by Lebanese satellite TV channel al-Manar on Friday.

According to Nasrallah, violence similar to that seen on Wednesday in Washington, DC was previously reaped by America to topple governments in other nations. “It's a small example of what Trump has committed in his four years in several other countries,” Nasrallah said. “Even Americans felt that he can kill them,” he added.

Four protesters and one police officer died in the wake of the Capitol siege, which followed a speech by Trump to supporters in which he promised to “never concede” the November election as Congress met to formally certify Joe Biden’s victory inside the legislative seat of power.

Nasrallah emphasised the significance of Wednesday’s events. “If it was small, all these actions, including the attempt to oust Trump from the White House, would not be necessary. What happened in the United States is tremendous and will affect the world,” the Hezbollah chief stressed, adding that the events showed “the reality of American democracy, which they tried to spread around the world, and the incident needs to be studied further."

Nasrallah also warned that America’s massive nuclear arsenal still remains “in the hands of a crazy fool called Trump,” and said he hopes the remaining days of his term in office pass without incident. “God protect the world from what he can do,” he said.

Hezbollah, the political and militant group partly – classified as a "terrorist organisation" by the United States, Israel, the Arab League and the European Union – is a Lebanese resistance movement that’s loosely allied to Iran and has assisted the Syrian government in its decade-long war against takfiri terrorists including Daesh (ISIS)* and al-Qaeda.* In addition to the jihadists, Hezbollah has repeatedly battled with Israel, engaging in dozens of major skirmishes with the Israel Defence Force throughout the past twenty years, and fighting a major war in 2006 which ended in a United Nations-enforced ceasefire.

Democrats have announced plans to start impeachment proceedings against Trump as soon as Monday. Republican legislators have opposed the idea, warning that such a move would “divide our country more.” Trump has committed to an “orderly” transition of power on 20 January.