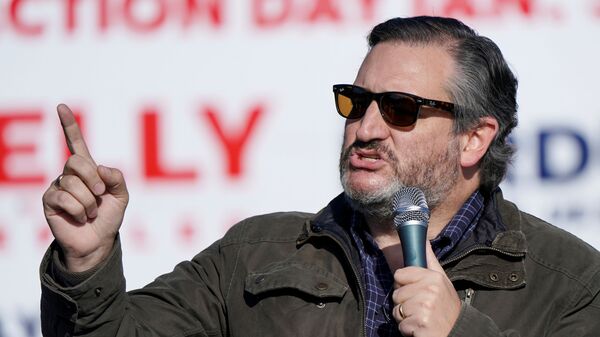 James Tweedie
All materialsWrite to the author
Democratic Congressman Eric Swalwell made his meteoric rise from small-town councilman to the House intelligence committee in a few years, purportedly with the help of Christine Fang, but has had to answer awkward questions after she came under investigation by the FBI.

Cruz cracked jokes at a campaign rally on Saturday for the Georgia run-off election between Republican incumbents David Perdue and Kelly Loeffler and Democrat challengers Jon Ossoff and Raphael Warnock.

​Cruz, the son of a Cuban immigrant, laid into Warnock for what the latter described as "embracing" the late Cuban President and Communist Party First Secretary Fidel Castro, adding: "Some of us take that a little personally".

"As the son of a Cuban immigrant, I have said many, many times: 'screw the Chinese communists!'. Apparently Eric Swalwell said: 'OK...'"

Swalwell made a meteoric rise from being a small-town councilman in Dublin, California, in 2010 to the US House of Representatives in 2015 — and subsequently onto the powerful Permanent Select Committee on Intelligence in his second two-year term.

Former Chinese student Fang Fang, who goes by the name of Christine Fang, worked on Swalwell's election campaign, and has since come under investigation by the FBI. It emerged in December 2020 that Fang had a sexual encounter with an unnamed mayor of an Ohio town some time between 2011 and 2015 in a car that had been bugged by the FBI, while an older mayor from a "midwestern" town had previously referred to her as his "girlfriend".

McCarthy Says Congressman With Ties to Chinese 'Spy' Should Never Have Sat on Intel Committee
Swalwell has refused to answer questions on whether he had sexual relations with Fang, claiming that the information was "classified" while the FBI was investigating. He has acknowledged that Fang raised money for his election campaign, but claimed that he never shared sensitive information with her.

Democrat House Leader Nancy Pelosi has come under pressure for appointing Swalwell to the committee and keeping him there even after the scandal broke.