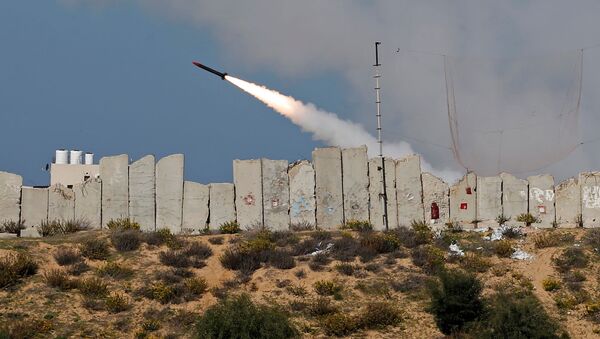 GAZA (Sputnik) - Palestinian armed groups on Tuesday fired several rockets toward the sea and launched drones as part of the military exercise in the Gaza Strip, a Sputnik correspondent reported.

"[The drills] are taking place to better cooperate and evaluate the combat capabilities of resistance members. We confirm that the exercise reflects the strength and unity of the resistance," a member of the Palestinian resistance movement said during a press conference.

The Jerusalem Post newspaper reported earlier that twelve armed groups are expected to participate in the drill.

Palestine and Israel have been locked into an armed struggle for decades, resulting in the proliferation of armed Palestinian groups in the region.

One of the main goals of the Palestinians is to restore their border with Israel to where it was before the 1967 Six-Day War, with the possibility of a territorial exchange. Palestinians hope to create their own state on the West Bank and in the Gaza Strip, with East Jerusalem as its capital. Israel, for its part, is hostile to the idea of restoring the previous borders and sharing Jerusalem.