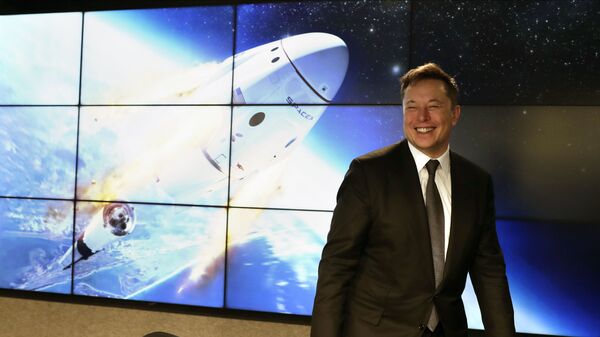 Lilia Dergacheva
All materialsWrite to the author
Although the Marscoin was specially devised to raise funds for the colonisation of the Red Planet, as well as enter into circulation on the potentially habitable extraterrestrial land, the Dogecoin reportedly stands a better chance of becoming Mars’ currency.

SpaceX CEO Elon Musk has asserted that any would-be economy on Mars could use digital currencies as a primary means of financial exchange.

Writing in a Twitter thread started by AI researcher Lex Fridman, Musk agreed with the notion that a Martian economy “will run on crypto”, proposing the arguably promising cryptocurrency Dogecoin or the fringe one Marscoin as alternatives.

Mars economy will run on crypto.

Between the two, Dogecoin is the most likely option, Musk agreed, although Marscoin "is dedicated to supporting the colonisation of Mars and other space-related projects intended to get humans living and thriving off of planet Earth", the Mars Society said. The organisation reserved for it the role of a source of funding for Mars colonisation as well as that of the projected colony’s de facto currency.

Marscoin was founded in 2014 and enjoyed a brief stint of popularity during the bull run shown by all major cryptocurrencies back in 2017, but has since drastically lost in value, with its current market cap under $100,000, as per CoinMarketCap.

The performance of the Dogecoin is viewed as more stable, with its price skyrocketing by over a third last week after Musk changed his Twitter bio to “Former CEO of Dogecoin”.

Musk, who is incidentally one of the co-founders of the online payment system PayPal, previously voiced an intention to send the first humans to Mars as early as 2024, in order to build a colony there, namely a “self-sustaining city as soon as possible”.

He has frequently expressed a determination to travel to Mars in his lifetime. Earlier this year, he stepped up work on the next-gen Starship rocket, which SpaceX is developing to take people to and from Mars, the Moon and various other faraway destinations.

The year 2020 has been a big one for SpaceX, as Elon Musk’s brainchild has averaged one launch every two weeks in recent months - 26 missions in total, breaking its previous calendar-year record of 21, set in 2018.

Viral
‘Bitcoin is My Safe Word’: Elon Musk Goes on Tweet Spree With Jokes and Memes About Cryptocurrencies

The most dramatic step to help humanity colonise Mars happened on 9 December, when SpaceX sent into space a shiny silver vehicle, SN8, in a test flight in a 7.8-mile-high (12.5 kilometer) test flight from the company's South Texas facility. The vehicle is the latest prototype of Starship, which, Musk said, will have six Raptors.

SN8 had only three, but they were powerful enough to take the vehicle far higher than any previous Starship prototype had ever gone. It performed a “belly flop” and other elaborate manoeuvres, landing exactly where the company wanted it to, though SN8 moved too fast and exploded. Despite this, Musk referred to the flight as a resounding success: "Mars, here we come!", he tweeted shortly thereafter.