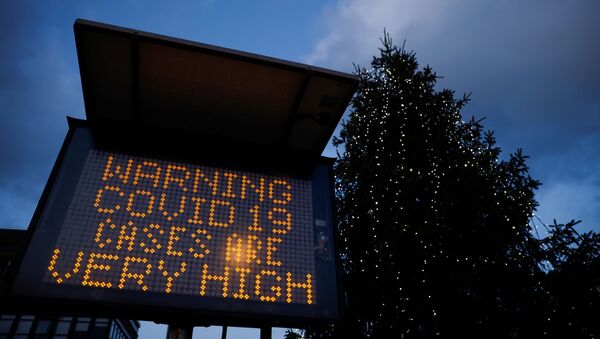 The United Kingdom has introduced enhanced measures to contain the spread of the COVID-19 coronavirus following the arrival of concerning news of a new mutant strain of the bug that is said to be transmitted more quickly that the original.

Alistair Jones, an associate professor in politics at De Montfort University in Leicester, UK, believes the government acted very quickly vis-a-vis the spread of the new coronavirus strain, yet their U-turn was too abrupt and upsetting to many and it will have grave consequences for the UK economy.

Sputnik: UK authorities earlier this week announced that a new strain of COVID-19 had been detected in the country and subsequently introduced tougher restrictions to contain the surge of new cases. How would you assess these revelations and restrictions?

Alistair Jones: I think there's two significant parts to this particular strain has become very virulent very quickly in the southeast of England. But there was an awareness of it way back in September in other parts of Europe, I believe in Denmark, but it suddenly hit the UK and it is spreading far, far, far faster than the original COVID-19. So the response the government wants, they realise just how quickly it was spreading was very quick. So according to Matt Handcock, the health secretary, they were made aware on Friday as to just how virulent disease was and how much it was spreading across the southeast of England. And that is why within 24 hours, the government locked down London, the southeast of England, also sometimes further afield, such as Portsmouth and Peterborough.

So on the one hand, they've acted very, very quickly. But on the other hand, you've got to set out in the context of everything else that's been going on. The governments have been saying, well, we're going to have to zero in effect for Christmas for five days over Christmas. We can mix and we can mingle. And even as late as Wednesday at Prime Minister's questions, Boris Johnson was saying the same thing. So it's been a very fast U-turn. And a lot of people are very upset and very angry because of the sudden change from five days of travel around the country to Christmas Day, but only close family.

Sputnik: The UK Health Secretary also claimed the economic impact of these decisions and restrictions would be very severe. How will this further affect an already struggling UK economy?

Alistair Jones: I think it's going to cause major problems because for many businesses, in particular the hospitality sector. December is the busiest time of year and this week leading up to Christmas is arguably the most lucrative. So for those businesses in London in particular, but also anywhere in the Tier-4 zone, they're going to be hurt very, very badly. Now, what we don't know yet is what support measures will be put in place for them. So, for example, when we last had a national lockdown, the Treasury was reasonably generous in giving support to these businesses to enable them to survive the lockdown and then hopefully come out of the lockdown and carry on trading. So I'm expecting to hear something from the Treasury, from the chancellor of the exchequer in the very near future about the support measures that are going to be in place for all of the businesses in full.

Sputnik: Where will this lead the economy and what measures should the government impose to sustain it?

Alistair Jones: Well, I think what they did previously was the furlough scheme, which is in place until April, anywhere where the government is paying 80 percent of people's salary, plus an upper limit as to how much they will pay. And there's also support then for businesses who are forced to shut down. There's also now some support from the self-employed, but there's been a lot of difficulties in accessing that. So much of what's being put in place throughout the entire pandemic is going to continue through until April and maybe beyond April as well. But at this moment in time, up until April, furlough schemes extra support through universal credit for those on benefits. That is in place until April. After that, we don't know. But it may well be that the various injections that will be around, but then may be enough to hopefully keep the UK alright. How much of the rest of the world is OK, the build up to next winter.

Sputnik: Boris Johnson has faced criticism over the introduction of the new measures. How will this influence his political agenda and the government's narrative amid the deadlock in post-Brexit trade talks with the EU?

Alistair Jones: I think the problem for Boris Johnson is that he is not seen as being a leader. He is not seen as taking decisive action. He is being seen as being led by events now. OK, nobody could have predicted the coronavirus. But the way the UK government has responded to the coronavirus since it hit the UK in early 2020, it has always been to delay, to obfuscate, to lie even, and then suddenly admit they were wrong without admitting they were wrong and just changing. And what we have seen with Boris Johnson is an inability to lead, an inability to be proactive, an inability to set the agenda.

Boris Johnson likes to be seen as a nice, big, friendly, happy chap who will make you feel better in yourself. And he is not the type of person you want leading a country in a pandemic. So with the Brexit negotiations stalling and even if a deal is reached, it won't be approved between now and the end of the year. So the UK is going to be leaving the transition period. Having already left the EU without a deal, there's going to be huge problems in getting imports into the country, but also getting goods out of the country. Some particular sectors are really going to struggle. So the government's already putting in place to use the military to get prescription drugs into the country and things like that. So this is not Boris Johnson doing this. This is the other people behind the scenes, the likes of Matt Hancock and others who are actually trying to be more proactive. And Boris Johnson is basically - he could actually be out of a job early in the new year. There is speculation he has a trip to India in January that he's likely to take. And it may well be that he will step down as prime minister after that or there will be a leadership challenge against him after that. And if that was to happen at the moment, he is not likely to win.

Sputnik: We saw British citizens in a panic trying to leave the Tier 4 zone amid new restrictions. What could this panic lead to, in your view? What is the public’s attitude towards these measures?

Alistair Jones: There were a lot of people the train stations were very, very busy as people tried to leave, in particular London. We haven't seen images of other areas such as Peterborough or other parts of the south east of England, we've only seen London where we've seen Londoners leaving London as quickly as they can because the Tier-4 lockdown didn't start until midnight.

So Boris Johnson made this announcement at about half past 4:00 in the afternoon, giving them 7 hours to pack their bags and dash off to another part of the country. And thousands of people did. Now, this is, in my opinion, hugely irresponsible because it only takes one or two of those people to be infected, to be asymptomatic, not even know that they've got the current virus. And they could be infecting everyone in the train potentially. And then those people are infecting their families around the country and they become super spreaders.  Having said that, there are millions more in London who have stayed in London and have phoned their families from their friends and said, sorry, we can't be up for Christmas prayer and cheer for we're stuck again. So the vast majority of those Tier-4 have been sensible, but there are thousands who have not who in my opinion, have been very selfish and have potentially led to the spread of this new strain of the virus around the UK. That is extremely worrying.

Sputnik: In your opinion, is the NHS ready to combat this new wave of the pandemic in the country?

Alistair Jones: I think it's the same as before. In the case of a social distancing. When you're in confined spaces where masks try not to interact with people, all the advice that would be given way back at the beginning of the pandemic needs to come back into place of the social distancing where keep two metres apart rather than more than one meter. It's a matter of going back to that because this new strain seems to be much more contagious. So if people are willing to do that and accept the importance of doing it as they were doing 10 months ago, then they be able to deal with the pandemic and then hopefully with the inoculations coming through as well, then the country as a whole and globally, we're going to be safer. But that's all conjecture, unfortunately.

Sputnik: The Netherlands and Belgium are banning flights from the United Kingdom because of this new strain of the coronavirus. What does this say about the hopes of those who longed for borders to open up by spring? Will we see European countries and the UK closing their borders as they did during the peak of the first COVID wave?

Alistair Jones: I mean, the other countries, the Netherlands and Belgium, closing the borders to the UK is not surprising. The advice from the U.K. government is to not travel overseas. So the UK government's already given this very clear advice in particular to the Tier 4 areas, that unless it is absolutely essential that you must travel, you must not. So that's the type of advice that they give. They want the UK to be safe and they want other countries to be safe in fairness. But I suspect that if this new strain is spreading around Europe, and as it appears to be, I can see all the European countries shutting their borders again. In the short term, they will have national lockdowns again in the short term and the hope of curtailing the spread. What we need to do is to look at some of the Southern Hemisphere countries, such as New Zealand, such as Australia, who shut their borders during their winter, bearing in mind that they're there in the middle of the beginning of this summit now. And they were able to get control of the spread of the virus in the UK and across Europe in our summer, we relaxed everything too much, arguably. And this has actually led to the virus continuing to spread more in the winter.

So we actually need to be a lot more careful in the winter to get things ready for the spring, in the summer, in the hope that we will be able to open up again, but open up again more carefully than was done this time around.