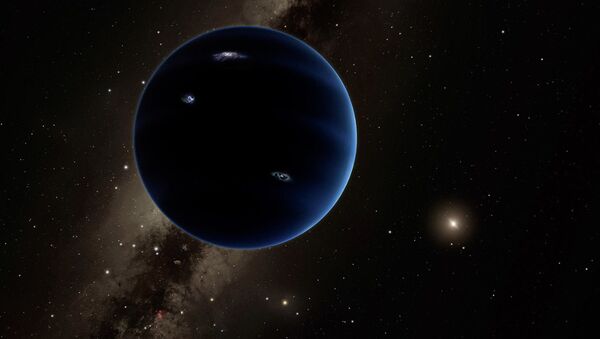 Mary F.
All materialsWrite to the author
Astronomers have yet to find Planet Nine, a hypothetical planet in the outer region of the solar system. According to some scientists’ calculations, this hypothetical planet could have a mass of about 10 times that of Earth and an elongated orbit 20 times farther from the sun on average than Neptune.

In a new study published in The Astronomical Journal, researchers outline novel information about an exoplanet, known as HD 106906 b, that appears to behave similarly to the elusive Planet Nine.

Although HD 106906 b was first discovered in 2013 using the Magellan Telescopes at the Las Campanas Observatory in Chile’s Atacama Desert, astronomers only recently discovered information about the planet’s orbit using the Hubble Space Telescope, which was launched into low Earth orbit in 1990. The recent study reveals that HD 106906 b is 336 light-years from Earth and orbits around a pair of host stars. The exoplanet is also massive, with a size 11 times that of Jupiter.

“The exoplanet resides extremely far from its host pair of bright, young stars — more than 730 times the distance of Earth from the Sun. This wide separation made it enormously challenging to determine the 15,000-year-long orbit in such a short time span of Hubble observations. The planet is creeping very slowly along its orbit, given the weak gravitational pull of its very distant parent stars,” the Hubble Space Telescope facility explained in a news release.

Astronomers were also surprised to learn that the exoplanet has an elongated and inclined orbit, which is unlike any of the other known planets in our solar system.

“To highlight why this is weird, we can just look at our own solar system and see that all of the planets lie roughly in the same plane,” the study's lead author, Meiji Nguyen of the University of California, Berkeley, said in a statement, the release noted. “It would be bizarre if, say, Jupiter just happened to be inclined 30 degrees relative to the plane that every other planet orbits in. This raises all sorts of questions about how HD 106906 b ended up so far out on such an inclined orbit.”

Researchers believe that the exoplanet may have formed close to its host stars. However, drag over time caused the exoplanet’s orbit to decay, which caused it to “migrate inward” toward the stars.

“The gravitational forces from the whirling twin stars then kicked it out onto an eccentric orbit that almost threw it out of the system and into the void of interstellar space. Then a star passed very close by to this system, stabilizing the exoplanet’s orbit and preventing it from leaving its home system,” the Hubble Space Telescope news release explains.

“It’s as if we have a time machine for our own solar system going back 4.6 billion years to see what may have happened when our young solar system was dynamically active and everything was being jostled around and rearranged,” explained research team member Paul Kalas.

Astronomers plan to further study HD 106906 b to learn more about how it was formed.

“Despite the lack of detection of Planet Nine to date, the orbit of the planet can be inferred based on its effect on the various objects in the outer solar system,” study co-author Robert De Rosa noted. “This suggests that if a planet was indeed responsible for what we observe in the orbits of trans-Neptunian objects it should have an eccentric orbit inclined relative to the plane of the solar system. This prediction of the orbit of Planet Nine is similar to what we are seeing with HD 106906 b."

The search for Planet Nine began in 2014 after astronomers Chad Trujillo and Scott Sheppard suggested that a large and unseen planet may exist beyond Neptune and that such a planet may be causing gravitational oddities in the orbits of distant objects like the dwarf planets Sedna and 2012 VP113.