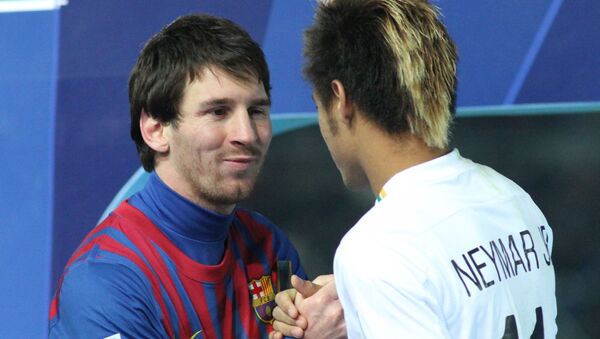 James Baillie
All materialsWrite to the author
Messi is thought to be dismayed by Barcelona's recent poor run of form and is preparing for a move. The Blaugrana currently sit nine points adrift of the top spot in La Liga and finished second in their Champions League group behind Juventus.

French soccer giant Paris St-Germain's hopes of signing Lionel Messi from Barcelona have been given a boost by the Catalan club's presidential candidate Emili Rousaud saying the Argentine forward's salary "is unsustainable" beyond the end of his contract next summer, according to AS.

“We’ll ask him to make the sacrifice. If there’s no agreement, then Messi will leave,” Rousaud added.

The news comes after PSG's Brazilian star Neymar further fuelled rumours of a possible reunion with Messi at PSG, after the two sides were drawn against each other in the Champions League earlier this week.

Neymar said he wants to play alongside Messi again, having combined in a devastating partnership at Barca between 2013 and 2017, winning Spain's La Liga twice, the Champions League title and three Copa del Reys.

After scoring twice in PSG’s recent Champions League defeat of Manchester United, Neymar said: “What I want the most is to enjoy playing with him again. For sure, next year we have to do it.”

The move certainly appears to be gathering momentum with Football Transfers reporting that PSG have told their club stores around the French capital to brace themselves for an influx of business based around Messi shirt sales.

The outlet reports that PSG have also told partner stores licensed to sell their official goods to prepare for a blockbuster deal.

Others took the club store news as a sign that Messi's Paris switch is finally imminent.

PSG have told their club stores to prepare for an announcement confirming the signing of Lionel Messi, according to FootballTransfers 😯 #Neymar pic.twitter.com/Bqzqiw49Ix

But Barca fans seem dismayed by the prospect of the two superstars coming back to haunt them in 2021.

Unpleasant Thought: Messi leaves Barcelona this winter for PSG. Returns along with Neymar in February as our UCL opponent. pic.twitter.com/TAwY50yYSd