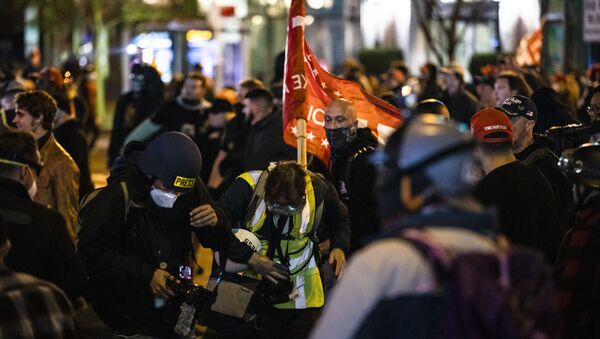 Sofia Chegodaeva
All materialsWrite to the author
Police announced that they have arrested an individual who "appeared to fire at least one round from a handgun into the opposing crowd".

Supporters of incumbent US President Donald Trump clashed with Antifa activists outside the Washington State Capitol building on Saturday.

The two groups met during two opposing events in Olympia, and this encounter resulted in violent brawls between the participants.

Videos emerged on social media, showing some of the activists using US flags as weapons during the clashes.

Fight breaks out between Portland/ Washington protesters and counter protesters for Back The Blue and President Trump #Portland #PortlandProtests #Washington #antifa #fight pic.twitter.com/KRePS2L1sT

​One of the videos apparently shows an activist pointing a handgun at Antifa protesters.

Individual who fired his gun earlier in the day can be seen at the :23 second mark pointing his firearm at protesters. According to an Olympia Police officer, that individual has been arrested & they are currently investigating the shooting. #Washington #Portland #Protest #fight pic.twitter.com/e4LQFPWb79

​Another footage shows the man firing the weapon.

Things are heating up. A shot was fired pic.twitter.com/SIxRGbdeD0

​Later, police confirmed that an individual who "appeared to fire at least one round from a handgun into the opposing crowd" had been arrested.