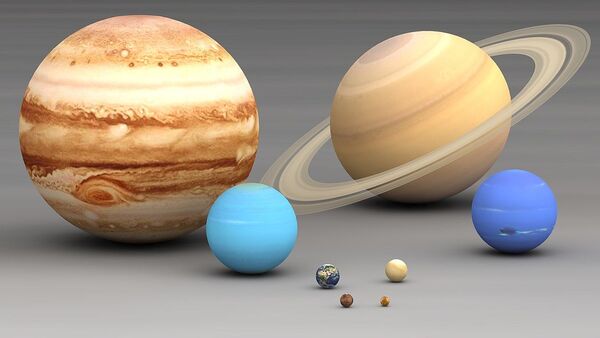 Henry Batyaev
All materialsWrite to the author
Although the two planets come in alignment relatively frequently - every 20 years or so - the last time the gas giants were this close to each other was when Genghis Khan was still alive.

The two biggest planets in our Solar System - Jupiter and Saturn - will appear so close in the sky on the 21 December winter solstice that they will look like "a double planet".

Rice University astronomer Patrick Hartigan said in a statement that the two planets align roughly every 20 years, but their current conjunction is exceptionally rare - they haven't been in such close proximity to each other since 4 March 1226.

“On the evening of closest approach on Dec 21 they will look like a double planet, separated by only 1/5th the diameter of the full moon. For most telescope viewers, each planet and several of their largest moons will be visible in the same field of view that evening”, the university quoted the astronomer as saying.

The rare phenomenon can be observed from anywhere on our planet if weather permits, according to the scientist.

Despite their unique pre-Christmas bonding, which is observable from the Earth as their convergence, the two planets, in fact, remain hundreds of millions of miles apart.