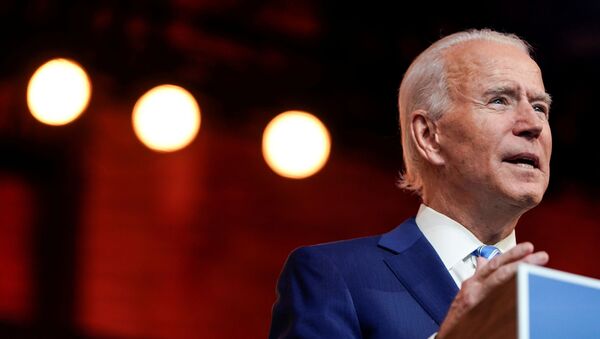 Gaby Arancibia
All materialsWrite to the author
Although US President Donald Trump has yet to concede the 2020 election over allegations of rampant voter fraud, the transition to a new administration is now underway as a result of the General Services Administration’s move to formally acknowledge Democratic candidate Joe Biden as the projected winner.

Biden remarked to New York Times columnist Thomas Friedman in a a piece published on Wednesday that he felt that he’d “done something good for the country by making sure that Donald Trump is not going to be president for four more years.”

He noted, however, that “there’s been no moment of elation” on account of Trump’s repeated claims of election fraud, the COVID-19 pandemic, and the stunted US economy, which has prompted unemployment concerns over the last ten months.

“It’s just one of those moments. There’s a lot of work to do,” Biden said. “I’m just focused on getting some things done as quickly as I can.”

Biden has promised that, once in the Oval Office, he intends to quickly implement measures to further curb the spread of COVID-19 within the nation. Since the US media’s call for a Biden win on November 7, the projected president-elect has indicated that his team will work to provide free coronavirus testing while also widening its availability to the general public. Additionally, the Biden team aims to pass a comprehensive economic plan to aid Americans and businesses struggling to make ends meet.

The latest figures, provided by the Johns Hopkins University, state that the US has documented at least 13.76 million COVID-19 cases, of which 180,083 were reported on Tuesday alone. California, where hospitals are increasingly overwhelmed with coronavirus cases, remains the US state with the highest tally of daily reported COVID-19 cases.

Although the Biden team has acknowledged the work done to create viable COVID-19 vaccine candidates, focus has shifted to bolstering a strong distribution plan, ahead of the anticipated Biden 20 January, 2021, inagural.

Rick Bright, an immunologist and member of Biden’s coronavirus transition task force, indicated in Monday remarks that he believes there are gaps in the current administration’s distribution plans, specifically in terms of providing funding to promote immunization programs in states.

Under the Trump administration, relations between the US and China have remained strained as a result of trade taxes the two nations have implemented against each another. Biden told the Times that in order to mend matters, he will first carry out a “full review” of current deals and reignite talks with foreign allies.

“The best China strategy, I think, is one which gets every one of our - or at least what used to be our - allies on the same page,” Biden said. “It’s going to be a major priority for me in the opening weeks of my presidency to try to get us back on the same page with our allies.”

He added that talks with allies in Asia and Europe will be necessary “so we can develop a coherent strategy.”

However, with one president exiting and another incoming, a changing of the guard isn’t likely to prompt an easing toward Beijing. Biden explained this his goals with China “would be to pursue trade policies that actually produce progress on China’s abusive practices - that’s stealing intellectual property, dumping products, illegal subsidies to corporations.”

The Trump administration has repeatedly accused Beijing of stealing US intellectual property, with the current FBI director, Christopher Wray, saying at a February conference that the agency believed “no country poses a greater threat than communist China.” Recently, Zhao Lijian, a spokesperson for the Chinese Foreign Ministry, criticized the comment, telling reporters during a Tuesday briefing that the oft-repeated rhetoric is “nothing but sour grapes.”

Tapping on Trump’s 'America First' approach to global diplomacy, Biden told the Times that he wants to “make sure we’re going to fight like hell by investing in America” before looking to back projects elsewhere. Biden explained that there are vast opportunities within energy, biotech, advanced materials and artificial intelligence that are ripe for large-scale government investment.

“I’m not going to enter any new trade agreement with anybody until we have made major investments here at home and in our workers” and in education, he told the outlet.

Rural America Won’t Be Left Behind

Biden acknowledged that individuals living in rural America had been “forgotten” by Democrats, underscoring that the party won’t be able to progress without support in those areas.

“You know, it really does go to the issue of dignity, how you treat people. I think they just feel forgotten. I think we forgot them,” Biden said. Noting he holds “respect” for rural Americans, the former vice president stated that he plans to prove it by “tackling the virus” in “red and blue areas alike.”

“[We have] got to end the rural health care crisis right now by building on Obamacare, assuming it survives at all, with a public option [and] automatically enroll people eligible for Medicaid,” he suggested.

“There’s strong support for that - and particularly [from] people in rural states, like Texas and North Carolina, that reject expansion. We can boost funding. I visited 15 rural hospitals. And the biggest problem is there’s not enough reimbursement for them to be able to keep open.”

“We have got to rebuild the middle class,” Biden said, adding “especially in rural America.”