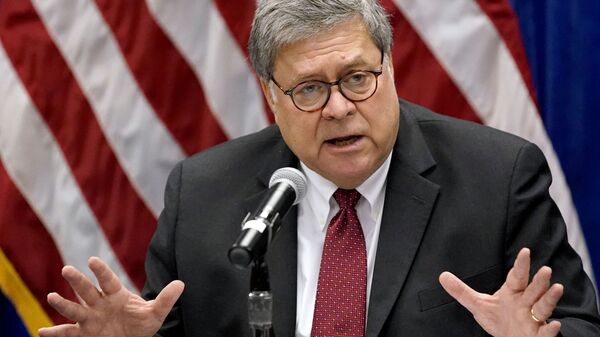 US Attorney General William Barr on Tuesday revealed in an interview with the Associated Press (AP) that the US Justice Department has not identified evidence of widespread voter fraud that would alter the outcome of the 2020 presidential election.

“To date, we have not seen fraud on a scale that could have affected a different outcome in the election,” Barr told AP, adding that US attorneys and FBI agents have been following up on complaints regarding voter fraud in the election but have yet to identify any vote fraud cases that would change the outcome.

“There’s a growing tendency to use the criminal justice system as sort of a default fix-all, and people don’t like something they want the Department of Justice to come in and ‘investigate,’” Barr said.

“Most claims of fraud are very particularized to a particular set of circumstances or actors or conduct. They are not systemic allegations. And those have been run down; they are being run down. Some have been broad and potentially cover a few thousand votes. They have been followed up on,” he added.

"There’s been one assertion that would be systemic fraud and that would be the claim that machines were programmed essentially to skew the election results," Barr told AP. "And the DHS [Department of Homeland Security] and DOJ [Department of Justice] have looked into that, and so far, we haven’t seen anything to substantiate that."

According to Robert Collins, a political analyst from the Dillard University, the Attorney General is the only one "who could order a larger investigation, and he has indicated that he will not do so".

"There is no chance that a larger investigation will be ordered, unless the Trump team can produce stronger evidence. It is important to keep in mind that under US law, the burden of proof necessary for a Federal Court to overturn an election is very high. The Trump Team has not met the burden of proof. Unless they can produce conclusive evidence, they will continue to lose in court", Collins stated.

Christopher Metzler, American political pundit, government strategist, and author, believes that Attorney General Barr seemed to foreclose the possibility of a Federal investigation, and that per Barr, there are not enough votes to make a difference.

"America is deeply divided and I fear that there is no solution that will satisfy all sides. In America, there are two sides. One that believes that Trump one. The other believes that Biden won and Trump lost. There is also distrust in the electoral system. This distrust weakens Democracy as we know it", Metzler suggested.

Most recently, the Trump campaign on Tuesday filed a lawsuit in Wisconsin claiming that thousands of absentee ballots must be withdrawn from the state’s vote count because they were not filed according to state law.

Last month, Barr also issued a directive to US attorneys across the country, which allowed lawyers to pursue “substantial allegations” of voting irregularities, USA Today reported.

"Such inquiries and reviews may be conducted if there are clear and apparently-credible allegations of irregularities that, if true, could potentially impact the outcome of a federal election in an individual State," Barr said in a memo to federal prosecutors last month.

The directive allows prosecutors to pursue investigations into voter fraud before election results are certified.

The attorney general’s latest comments on not finding proof of voter fraud also come after Barr previously expressed that he was concerned about the integrity of the 2020 election given the widespread use of mail-in ballots during the COVID-19 pandemic.

“The government and the people involved can find out and know how you voted. And it opens up the door to coercion,” Barr said in September. He has also claimed that mail-in ballots are more vulnerable to manipulation by foreign powers.