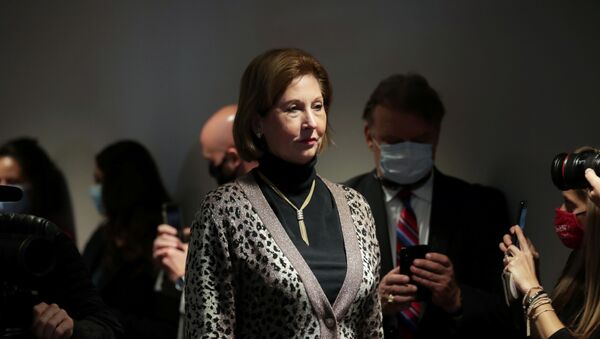 Asya Geydarova
Editor
All materialsWrite to the author
According to a 104-page lawsuit, multiple violations of the Constitution could have taken place during the 2020 presidential election, all aimed at putting the presumed president-elect Joe Biden ahead.

Attorney Sidney Powell is suing Georgia state officials over what she calls a massive fraud scheme that supposedly took place during the presidential election in the state.

"The scheme and artifice to defraud was for the purpose of illegally and fraudulently manipulating the vote count to make certain the election of Joe Biden as President of the United States", Powell stated in the lawsuit filed on Wednesday.

According to the lawsuit, the "massive fraud" begins with the controversial Dominion voting system, which Powell says does not allow for a "simple audit to reveal its misallocation, redistribution, or deletion of votes". Moreover, she writes, the machines were connected to the Internet in violation of state and federal laws.

President Trump himself has repeatedly slammed the Dominion voting system, suggesting that it could have switched votes from him to Joe Biden.

Powell also mentions Fulton County, where she says poll watchers were evacuated under the claim of a burst pipe, leaving several election workers "unsupervised and unchallenged working at the computers for the voting tabulation machines".

What is most shocking to her, Powell says, is that the "old-fashioned" tactic of ballot-stuffing was allegedly applied in this election.

"The fraud was executed by many means, but the most fundamentally troubling, insidious, and egregious is the systemic adaptation of old-fashioned ballot-stuffing."

As a result, "based on the overwhelming evidence of election tampering", Powell is asking the state court to prevent the Georgia governor and secretary of state from sending the currently certified results to the Electoral College.

Georgia is one of the four states that have so far certified Biden as their winner, though according to Governor Brian Kemp, the audit process revealed irregularities in several counties. The state's hand recount was completed last Thursday, but Kemp did not endorse the results and called for another full hand recount in Georgia.

On Sunday, the legal team of President Donald Trump filed a petition for another vote recount in Georgia, stressing that illegal ballots must not be counted and that there must be signature matching.

Despite allowing for the process of power transfer to begin, Trump has refused to concede to what he calls "election fraud", saying that the GSA's green light for the transition has nothing to do with his pursuit of ensuring the legitimate election results.

The Trump campaign has filed numerous lawsuits in the battleground states where they believe election fraud and irregularities could have been applied by Democrats to ensure Biden's victory.