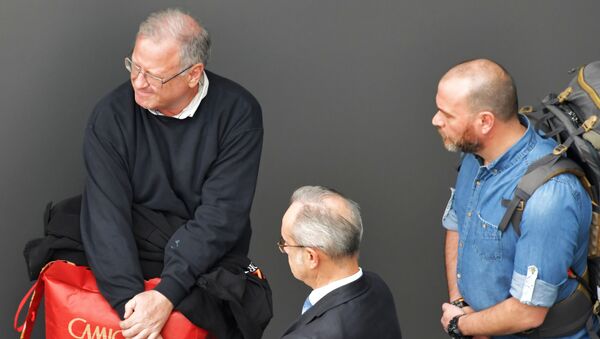 © AFP 2021 / NELSON ALMEIDA
Subscribe
MADRID (Sputnik) - Carlos Garcia Julia, one of the perpetrators of the deadly attack in Madrid’s street of Atocha in 1977, has been released from prison following the Provincial Court of Ciudad Real's decision to reduce his sentence by 12 years, the 24 Horas channel reported on Thursday.

Garcia Julia was one of the three persons arrested as the perpetrators of the attack, which resulted in five killed and four injured activists from the Spanish Communist Party and largest trade union Workers’ Commissions. The terrorists were linked to far-right extremist parties New Force and Warriors of Christ the King.

The court considered Garcia Julia as the main perpetrator and sentenced him to 193 years of imprisonment. Due to law reforms, Garcia Julia had his sentence reduced to 30 years. In 1991, he was granted parole and three years later gained permission to work in Paraguay. The parole was recalled when Julia evaded the security service's view. In 1996, he was arrested in Bolivia for drug trafficking and received a sentence of six years in prison. After his term in Bolivia, he disappeared and was rearrested in Brazil as early as 2018. Two years later, Spain secured Garcia Julia's extradition, and he was taken to a prison near Madrid to serve the remaining 12 years of his term. However, the court decided to reduce his sentence, taking into account the term he served in Brazil.

The Atocha attack played a significant role in Spain's democratic development and sparked the first mass rally of the leftists after the death of Spanish dictator Francisco Franco. In 2003, Madrid's local government installed a memorial in Atocha street dedicated to the victims of the attack, and a number of Spanish streets are named after the massacre's victims.