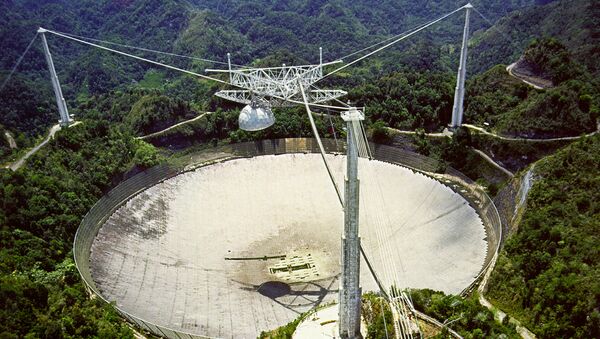 The observatory became famous in more than just scientific circles after appearing in such movies like “GoldenEye”, “Contact” and the “X-Files” TV series. Its building was completed in 1963, and for more than 50 years it has been considered the world’s largest single-aperture radio telescope.

The iconic Arecibo radio telescope will be decommissioned, as damage to the facility cannot be stabilised without an unacceptable risk to construction workers and staff, the National Science Foundation (NSF) announced on its website.

"For nearly six decades, the Arecibo Observatory has served as a beacon for breakthrough science and what a partnership with a community can look like. While this is a profound change, we will be looking for ways to assist the scientific community and maintain that strong relationship with the people of Puerto Rico," said NSF Director Sethuraman Panchanathan.

NSF’s first priority is safety. Multiple assessments by independent engineering companies found the telescope structure is in danger of a catastrophic failure and its cables may no longer be capable of carrying the loads they were designed to support. https://t.co/En0S7OOhY4

​In August, an auxiliary cable slipped from its socket in one of the towers and left a 100-foot gash in the dish below. While engineers assessed that the structure was stable and engaged in the planning process to restore the telescope to operation, a second cable snapped and was left suspended over the dish.

The University of Central Florida, which took part in the management of the Arecibo Observatory confirmed that the university had hired two additional outside engineering teams to assess the situation. Thornton Tomasetti's model suggested there was no course of action that could safely verify the structure's stability and advised against allowing personnel on the telescope's platforms or towers.

We are extremely saddened to share that the @NSF just announced it will begin planning the controlled decommissioning of the @NAICobservatory in Puerto Rico 📡 😔https://t.co/BwuxCLlrKS

​"Although it saddens us to make this recommendation, we believe the structure should be demolished in a controlled way as soon as pragmatically possible. It is, therefore, our recommendation to expeditiously plan for decommissioning of the observatory and execute a controlled demolition of the telescope," the Tomasetti engineering consulting firm advised.

In 1989, the observatory directly captured the image of a near-Earth asteroid 4769 Castalia, the first asteroid to be modeled by radar imaging.