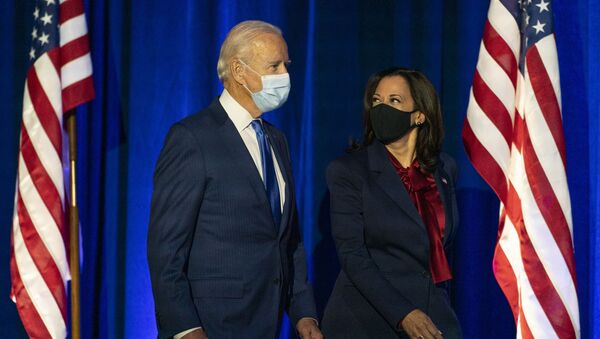 © AP Photo / Carolyn Kaster
Subscribe
This comes as the number of confirmed coronavirus infections in the country has exceeded 11 million, with more than 246,000 deaths, according to Johns Hopkins University.

Watch a live broadcast from Wilmington, Delaware as Joe Biden, who has been projected as the winner of the US presidential election by the media, and his vice presidential running mate Kamala Harris deliver remarks on the US economy amid the coronavirus pandemic.

Earlier in the day, the incumbent president of the US, Donald Trump, doubled down on his confidence that he won the 3 November presidential election. Previously, he has repeatedly taken to Twitter to insist that Biden "only won in the eyes of the fake news media", adding that he concedes "nothing".

According to the AP's tally, Biden has won 290 of the Electoral College votes, while Trump has 232 votes.

000000
Popular comments
No matter what they say it's only designed to bull shat the public into thinking they care about anything but the status quo establishment. there only concern is to sell the dumbed down public whatever the oligarch that put them there want. First they will propaganda soak you with typical economy doublespeak and then Next up war with uran. in the meantime it's how to control and manage the human cattle farm while milking the Panicdemic.