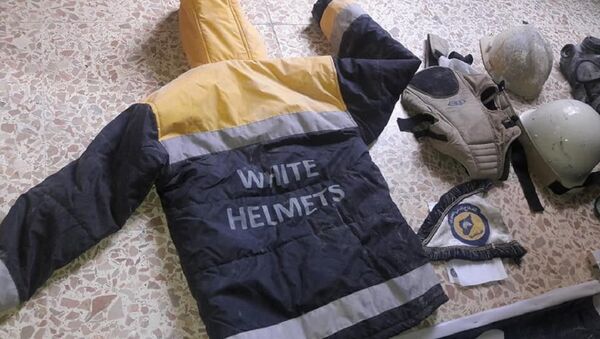 © Sputnik / Morad Saeed
Subscribe
MOSCOW (Sputnik) - The Russian embassy in the United Kingdom criticized on Tuesday a BBC series of reports about the White Helmets that omitted the organization's "proven links with terrorist organizations" and false-flag provocations, among its other illegitimate activities in Syria.

Previously, BBC Radio 4 released a podcast series titled "Intrigue. Mayday" this week that was focused on the activities of the White Helmets and the persona of the organization's founder, ex-officer of MI6 British Secret Intelligence Service James Le Mesurier.

"First of all, we are appalled by the whole method the BBC uses in this particular work, defining the Russian position or statements as 'false,' apparently by default, without providing any evidence. Moreover, judging by your letter, it is Russia which has to do the job of persuading the BBC in the credibility of its actions and statements, rather than vice versa. We do not think this peculiar form of journalism should be considered a professional one by any standards," the embassy said in a letter to the BBC.

Asserting that Russia's position on the matter is "well-founded," the embassy cited the abundant evidence — both collected on the ground and provided by intelligence services — that denudes the White Helmets' direct links to terrorist organizations in Syria. The organization pursued a coup in Damascus and carried out numerous illegitimate actions toward this aim, including false-flag chemical attacks and disinformation campaigns, according to the letter.

Le Mesurier, in particular, has a proven record of direct communications with terrorist organizations during the time he spent in Syria and Kosovo, the embassy said.

"James Le Mesurier was found dead soon after these links were exposed. Speculations on Russian involvement in his death, convenient as they are, are part of a deliberate disinformation campaign against Russia, in which the BBC is sadly participating," the letter read.

OPCW is Organisation Facilitating US' Demonisation of Other States & Providing Casus Belli - Journo
The Russian embassy further called upon the UK public broadcaster to refrain from labelling as "discredited" all those journalists whose reports contradict the UK government's official positions. Moreover, the embassy recalled how the BBC's own employee, producer Riam Dalati, confirmed in a tweet last February that his 6-month long investigation had abundantly proven that scenes of the aftermath of alleged chemical attacks in the Syrian city of Douma were "staged."

The embassy concluded the letter by urging the UK government to "reconsider its position towards the White Helmets and, more broadly, to the Syrian conflict in order to bring peace and stability back to Syria."

The White Helmets is a UK-registered non-governmental organization. It describes itself as a group of former bakers, tailors, engineers, pharmacists, painters, carpenters, students and workers of other professions who volunteered to go to the "most dangerous place on earth" and "protect civilians from violence."

The group gained wide publicity after engaging in Syria, where a civil war is in its tenth year now. While the White Helmets have been hailed in the West, Damascus has accused the group of propaganda and extremism.

000000
Popular comments
It's a shame that the UK government supports head-choppers like the White Helmets. Staged chemical attacks, enforcing the Sharia Law, war crimes against civilians pinned down on the Assad forces, etc. That's why every single terrorist attack in the UK is and always will be a friendly fire or accident but never a terrorism. People doing the so called terror attacks are paid by the UK government and therefore can't be terrorists since they only do what the government wants.