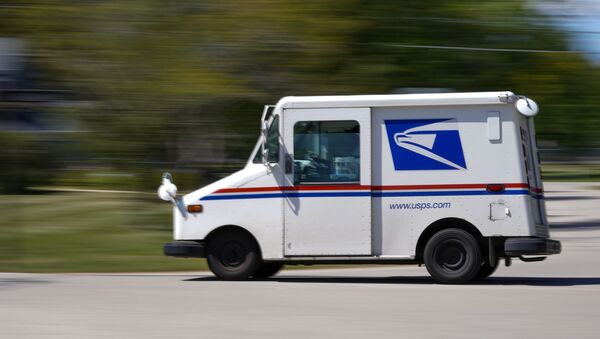 Aleksandra Serebriakova
Moscow-based Sputnik correspondent specializing in foreign affairs.
All materialsWrite to the author
As postal voting is currently a topic of much debate in the United States amid ongoing election vote counting, many Republicans have raised questions regarding the safety and trustworthiness of delivering ballots by mail.

A US Postal Service staffer from West Seneca, New York has reportedly been arrested after around 800 pieces of undelivered political, first-class and standard mail were found at his trunk, The Buffalo News first revealed. Among the abandoned mailings were three absentee ballots that were intended for Erie County, the report says.

The postman was identified as 27-year-old Brandon Wilson, who has been with USPS since 2019.

He was reportedly caught at a border crossing with Canada after taking a wrong turn to the Peace Bridge which connects Buffalo to Fort Erie, Ontario on 3 November. When US Customs and Border Patrol agents stopped the man, they came across a large amount of undelivered mail in his vehicle.

Wilson reportedly lied that the mail had belonged to him and his mother, but when questioned “could not account for additional names printed on the mail pieces”, court paperwork reveals.

According to the investigation, the mail had been stolen from the worker’s delivery routes since September this year and put into his trunk on more than four instances. Wilson is said to have been stealing checks and cash from greeting cards meant for Buffalonians.

When confronted, the postal worker argued that he was planning to return the mail but “forgot” them in his trunk.

"Wilson intended to whittle down the amount of mail in the trunk of his vehicle by placing a small amount of the mail into USPS mis-sort containers in the morning before his shift began. Wilson last reintroduced mailings into the mail stream in this fashion approximately three weeks prior [to] the date of the interview,” says a complaint from special agent Brendan M. Boone.

The man will now be charged with delaying or destroying mail, which constitutes a federal offence. He could be sentenced to a $250,000 fine or up to five years in prison.

"This office is committed not only to ensuring the integrity of the mails, but also of individuals' rights to vote in a free and fair election. The criminal conduct with which this defendant is alleged to have engaged undermined both of those interests,” US Attorney James P. Kennedy Jr. said in a written statement, as provided by Fox News.

The news comes as ongoing uncertainty persists over the results of the US election as some key swing states still continue to receive and count mail-in ballots, something President Donald Trump has defined as “major fraud”.

It was also earlier claimed by an anonymous USPS insider from an office in Michigan, another election battleground, that mail carriers at his branch were instructed by their supervisor to separate all incoming ballots arriving later than the Election Day, which would then be hand-stamped '3 November'.