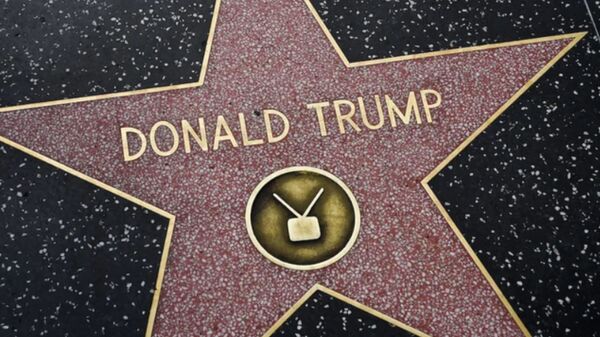 © Getty
Subscribe
International
India
Africa
Victoria Teets
All materialsWrite to the author
US President Donald Trump’s star on the Hollywood Walk of Fame has been fenced and boarded up, along with many surrounding buildings ahead of the highly anticipated and already contentious presidential election results.

Many businesses around the country have taken additional security precautions in anticipation of protests stemming from the results of the election by boarding up their buildings with plywood. On California’s Hollywood Boulevard, establishments such as the El Capitan Entertainment Center, the Ripley’s Believe It or Not museum and multiple posh shopping areas have put up boards.

According to a report by Variety, as of Tuesday morning, Trump’s star on Hollywood Boulevard was also covered with plywood, and a sign had been put up saying “No public access” on barrier guardrails surrounding it to prevent people from getting too close.

Trump’s star, which was awarded in 2007 for producing TV beauty pageants, has repeatedly been a target for vandalism by his detractors. In fact, it has already been destroyed at least four times in the past several years: twice in October and once each in 2016 and 2018.

Trump's recently-vandalized star on the Hollywood Walk of Fame has been boarded up with a sign reading “No public access,” ahead of Election Day results https://t.co/jKdJ7iMIfI pic.twitter.com/eh5nNauMtH

According to Variety, James Otis, who has previously vandalized Trump’s star, destroyed it with a pickaxe on Friday morning. It’s possible the star has remained boarded up since then and was intentionally left protected for Election Day.

Otis has also claimed that he was behind its earlier vandalism in October, when someone dressed as Marvel’s Incredible Hulk destroyed the star mere hours after the president and first lady Melania Trump announced they had tested positive for COVID-19.

The Hollywood Chamber of Commerce has spoken out against any damaging of the stars, which can be met with felony charges.

“Any star which is vandalized or destroyed, no matter which honoree it belongs to, will be replaced by the Hollywood Historic Trust, a non-profit, non-partisan group. The Hollywood Walk of Fame is a historic landmark which celebrates the professional contributions of the inductees,” Rana Ghadban, president and CEO of the Hollywood Chamber of Commerce, told Variety.

“The stars, once installed, are considered part of the historic fabric of the Walk,” Ghadban added.

“When people are angry with one of our honorees, we would hope that they would project their anger in more positive ways than to vandalize a California state landmark. Our democracy is based on respect for the law. People can make a real difference by voting and not destroying public property.”