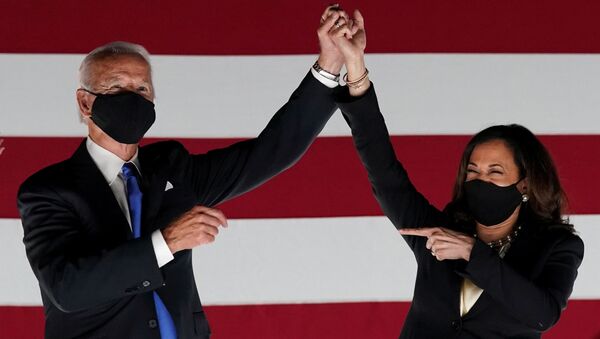 © REUTERS / KEVIN LAMARQUE
Subscribe
International
India
Africa
Victoria Teets
All materialsWrite to the author
A campaign sign for the Biden-Harris Democratic ticket challenging incumbent US President Donald Trump has been defaced with a swastika.

The vandalism on the sign supporting former US Vice President Joe Biden and his running mate, Sen. Kamala Harris (D-CA), was discovered in Ankeny, Iowa, on Tuesday.

According to a police report obtained by the Des Moines Register, the candidates’ names on the yard sign were covered in white paint, and a red swastika was painted over them.

Neighbors of the property where the incident occurred told police that the painting was probably done on Monday night or in the early hours of Tuesday.

In the past six months, there have been four reports to the Polk County Sheriff’s Office of campaign signs being damaged. In one instance, a sign was set aflame north of the town of Bondurant. However, none of the previous vandalism incidents involved swastikas or any similar symbols or messages.

Sgt. Ryan Evans, spokesperson for the Polk County Sheriff's Office, said no suspects have yet been identified.

"That's obviously extreme," Evans said. "It could be construed as a hate crime, which does elevate the severity."

Amid the contentious election coming up on Tuesday between Trump and Biden, reports of vandalized or stolen campaign signs have popped up across the US.

A Florida man is facing charges of grand theft and trespassing after local police stated he stole a bulldozer from a construction site and drove around destroying Biden signs, reported The Hill. A hay bale display constructed on a Massachusetts farm in support of Biden and Harris was set on fire earlier this month, the outlet added.

Additionally, in Michigan, “a township employee attempting to remove an improperly placed Trump-Pence 2020 sign had his hand sliced open and required 13 stitches because it had been booby-trapped with razor blades,” noted The Hill.

The Iowa sign incidents could be a sign of a tense political atmosphere, as polls say the vote there could be very close, according to The Hill. Both presidential candidates have directed attention to the battleground state.

Trump held a rally last week in Des Moines; meanwhile, Biden will be returning to Iowa this week for the first time since becoming the Democratic nominee, noted the outlet.