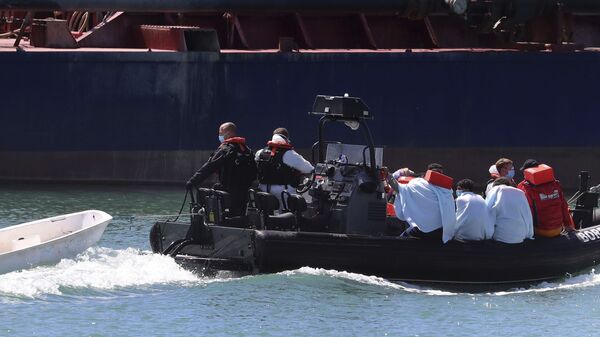 James Baillie
All materialsWrite to the author
Britain is preparing to use nets to routinely "disable" dinghies carrying migrants across the Channel, according to Dan O'Mahoney, the Clandestine Channel Threat Commander, who is in charge of preventing the crossings.

Dan O'Mahoney, the UK's 'Clandestine Channel Threat Commander', who was appointed to his current position by Home Secretary Priti Patel in August, said Britain was "very close" to being able to use a new "safe return tactic" which will halt the flow of boats.

Speaking to The Daily Telegraph, O'Mahoney said that the UK government was using social media campaigns to urge would-be migrants in Africa and the Middle East to claim asylum in the first safe country in which they arrive, rather than risking their lives in an "incredibly dangerous journey" to reach the UK illegally.

His remarks came after it emerged that the UK government was considering using offshore holding centres, disused prisons or retired ferries to temporarily accommodate those who reach the UK illegally.

The number of clandestine arrivals to the UK is currently exceeding 300 per day - the highest numbers on record. In 2019, less than 30 percent of illegal entries into the UK was used via small boats but that has now surged to 70 percent as the coronavirus pandemic has hit rail and air travel.

O'Mahoney added: "We definitely are very, very close to being able to operationalise a safe return tactic where we make an intervention safely on a migrant vessel, take migrants on board our vessel and then take them back to France. The problem with that currently is that the French won't accept them back to France."

Commenting earlier on the matter, O'Mahoney said that the envisaged method mirrored a method trialled by the Royal Navy in which nets were used to clog propellers and bring the boats to a standstill. He added that the tactic was one of many that the Navy may deploy over the next few months and that he was working with maritime security departments across law enforcement and the military to come up with new tactics to tackle the problem.

The number of people who applied for asylum in the UK in 2019, the last full year for which data is available, was 35,566, an increase of 21% on the previous year. This year the number is expected to be higher, according to the UK government.

000000
Popular comments
Finally....we’ve let in that many which has proven, over the years, to be a nightmare. It’s also now preventing the Government going towards Herd Immunity as theses non Anglo Saxon folk appear to be more susceptible to Covid....and to see thousands die wouldn’t be very politically incorrect.....so we’re going to be locked down again to no avail but to postpone the inevitable.