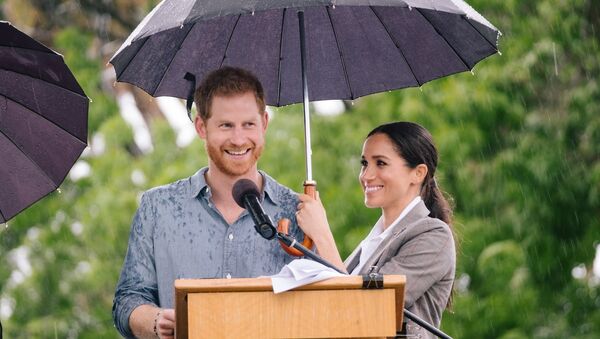 Lilia Dergacheva
All materialsWrite to the author
The Duke and Duchess of Sussex have of late been repeatedly bashed for breaking royal protocol, being accused of meddling in politics and being excessively outspoken on social issues. The criticism gained momentum last week when Harry weighed in on the upcoming US poll by urging voters to "reject hate speech, misinformation, and online negativity".

Ex-senior royals Prince Harry and Meghan Markle are scheduled to appear in a video on Sunday with activist and Nobel Prize winner Malala Yousafzai to mark the International Day of the Girl Child on 11 October and address the obstacles facing young girls as they seek access to education around the world.

According to the Associated Press, the conversation will be published on the Malala Fund's YouTube channel and website.

The Fund, founded in 2013 by the Pakistani activist and her father, Ziauddin Yousafzai, is an international nonprofit partnering with girls education initiatives across the world, from Afghanistan to Brazil and India.

One of the topics to be discussed is how the pandemic has impacted education for girls, as the Malala Fund's research suggests that around 20 million secondary-school-aged girls may fail to return to classrooms once schools reopen after the healthcare crisis.

Harry and Meghan, who formally ditched their senior royal duties in April, at the height of the pandemic, have been particularly vocal on political and social issues since moving to the US. Quite a few of their comments and interviews have already landed in Buckingham Palace's crosshairs, with the latter choosing to distance itself from the matter arguing Harry is "not a working member of the Royal Family".

The issue reached a boiling point when in a September video, Harry said from his new lavish Santa Barbara home that US voters need to "reject hate speech" and "misinformation" ahead of the November election, which was taken by some as a veiled dig at the incumbent president and thus a breach of protocol, whereby royals have to be politically neutral.

Meghan also had her say at the time, stressing the importance of the upcoming election and dubbing it one of the most essential votes in her life.

Socially loaded issues were not crossed off the Duke and Duchess's agenda either, as the couple penned a joint op-ed in London's Evening Standard last week, calling for an end to "structural racism". The couple wrote that "untapped potential will never get to be realised" if structural racism doesn't cease to exist in Britain and beyond. Meghan Markle sang the praises of the Black Lives Matter protests that swept across the US over the summer, calling the demonstrations "a beautiful thing" as long as they aim to bring "unity and recognition of equality".

She went on to acknowledge, though, that the often violent rallies in the wake of African American man George Floyd's death in police custody had at times been "inflammatory".

In Search of Independent Lives

On 8 January, Prince Harry and Meghan Markle first announced they were stepping down from their senior royal roles in a bid to work to lead financially and personally independent lives. The public met the move with outrage, with media reports claiming at the time that the couple had failed to notify other members of the family, including Her Majesty, about their plans to leave Britain, and likewise, most recently, about their intention to partner with American streaming titan Netflix.

According to a family insider cited by the Mirror, despite the couple having ditched formal royal duties starting in April, any profit-oriented plans would be "subject to discussion" in the royal circle. The 35-year-old Harry and 39-year-old Meghan, who recently settled down in a $14 million estate in Santa Barbara, signed a new deal with the streaming service, stressing they want to provide "hope and inspiration" with their projects.