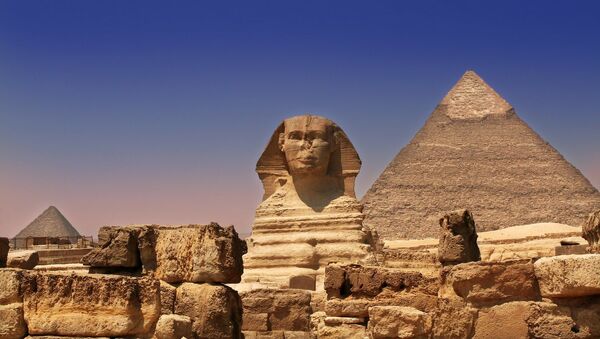 CC BY 2.0 / Sam valadi / Giza Pyramids & Sphinx - Egypt
Subscribe
International
India
Africa
Andrei Dergalin
All materialsWrite to the author
While some scholars reportedly remain hopeful that the tunnels beneath the famous monument might lead to some new treasures, Dr Zawi Hawass is apparently not convinced that anything of value can be found there.

The famous ancient Egyptian monument known as the Great Sphinx of Giza may still harbor some previously undiscovered secrets beneath it, the Daily Express reports.

Previously, prominent Egyptologist and Egypt's former Minister of State for Antiquities Dr Zahi Hawass reportedly confirmed the presence of three tunnels underneath the Sphinx, and last year he undertook excavations that "rediscovered the access tunnels to several large, apparently natural, caves" located directly beneath the monument.

And according to the newspaper, historian Bethany Hughes revealed in her Channel 5 show “Egypt’s Greatest Treasures" how archaeologists continue to investigate "under the statue because there are tantalising clues that the Sphinx sits right on top of a network of chambers and tunnels".

"Usually hidden from view, a deep hole near the Sphinx’ tail is thought to be connected with a large chamber beyond", she said. "There’s actually another smaller one [chamber], right at the front underneath the paws. The truth is, we have absolutely no idea what these were used for, but it’s a mystery that researchers are currently trying to solve. And some are hopeful that these hidden tunnels may lead us to new, undiscovered treasures".

Hughes also went on to describe the Sphinx as a "monumental guard dog, watching over the Pharaoh’s tomb" and "the guardian of ancient Egypt’s secret".

Dr Hawass, however, reportedly said that he doesn't think that anything of value will be found there.