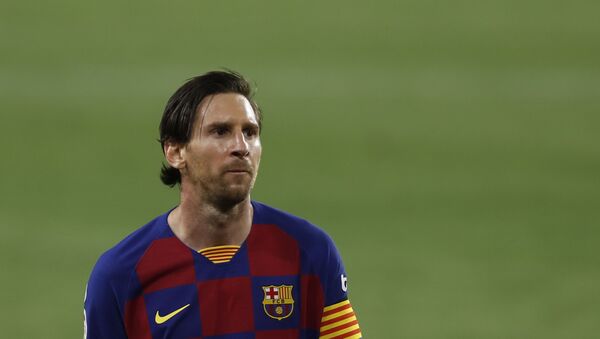 © AP Photo / Angel Fernandez
Subscribe
International
India
Africa
Argentine forward, Lionel Messi, ended a saga of controversy in September after he confirmed that he had no intention of leaving Barcelona after expressing his intentions to jump ship.

Barcelona coach Ronald Koeman praised Lionel Messi on Saturday as an ideal captain and setting an example for the rest of the team.
"From day one, Leo has trained and played well and has given the maximum for the club, for his team and for his team-mates and I have had no complaints about him", Koeman said before Barca face off at home against Sevilla in La Liga on Sunday.

Citing the 33-year old player's previous match against Celta Vigo, the coach said: "he pulled his weight as a captain, he helped the team play the ball out from the back because it's so important to keep the ball when you have one less player".

"There's no debate, for me he has always been the best player in the world, I thought that before from the outside and I think it even more now I'm working with him. He's fully committed, he's an example to everyone as a captain should be", he added.

Koeman also lauded the performance of Philippe Coutinho, who has seen an improvement in his playing since returning from a loan spell at Bayern Munich, after a poor stint in his two seasons with the Catalans following a club record move from Liverpool two years ago.

"Coutinho is a very good player, he has learned a lot in England and with Bayern and my job as a coach is to get the best out of each player and find their best role", he said.

"A coach can help but it all starts with the quality of a player and Coutinho is a great footballer".

The Barca coach also said that the club is looking to sign a striker and a centre-back before the end of the transfer window, confirming that he is interested in securing Manchester City defender Eric Garcia.

"We would like to sign this player, we have four centre backs and we are short there. We know it's difficult financially but I hope we can get it done", Koeman said.

This follows fears that Messi could lack commitment after the club prevented him from leaving.

Last month, the Argentine caused massive speculation after he expressed plans to leave the club before changing his mind in the face of a looming legal wrangle with the club.

"I thought and was sure that I was free to leave, the president always said that at the end of the season I could decide if I stayed or not", Messi said.

"Now they cling to the fact that I did not say it before June 10, when it turns out that on June 10 we were competing for La Liga in the middle of this awful coronavirus and this disease altered all the season".

The decision to stay squashed the hopes of teams across Europe that they could sign the Argentine, who is regarded by many as the best footballer of all time.