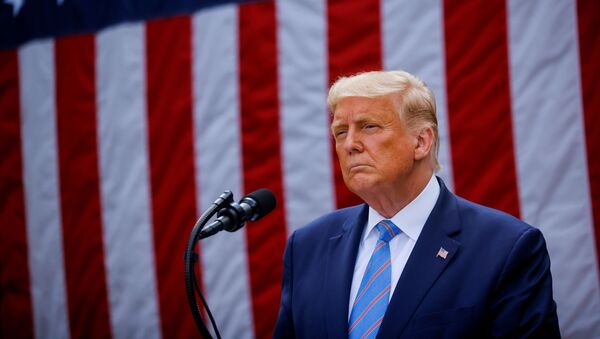 Lilia Dergacheva
All materialsWrite to the author
After President Trump stated during Tuesday night’s debate that the right-wing political activist group Proud Boys must "stand back and stand by", the public, including a number of Trump's Republican allies, have urged the president to clarify his stance and unequivocally denounce white supremacy.

Fox News White House correspondent John Roberts has taken aim at some of his Twitter followers for “hammering” him over asking White House press secretary Kayleigh McEnany for a “definitive and declarative statement” that POTUS condemns white supremacy and groups who espouse this ideology.

"Why didn't he say, 'I don't know who they are. Can you give me more information about them?' and then make a decision about it? So this all remains puzzling," an apparently frustrated Roberts told "Outnumbered Overtime" guest host Melissa Francis on Thursday.

The reporter went on to stress, addressing a number of Twitterians, that “it’s a question that needs to be asked, and clearly the president's Republican colleagues a mile away from here are looking for an answer for it too,” he fumed.

Roberts went further and called on the public to “stop deflecting and blaming the media” and complaining that he has got “tired of it.”

POTUS has landed in the crosshairs of many, including a number of GOP lawmakers, for not coming up with an unambiguous, definitive denouncement of white supremacy when the question popped up during Tuesday’s first in-person debate between the incumbent president and his Democratic rival Joe Biden.

When debate moderator and Fox News anchor Chris Wallace asked POTUS if he was willing to condemn white supremacy, Trump replied "Sure,” but instantly moved on, insisting “left-wing” groups were to blame for the lion’s share of violence in the country. Earlier, at the height of the often violent BLM rallies across the US, POTUS said he would designate Antifa as "a terrorist organisation."

Elsewhere in the discussion, Democratic nominee Joe Biden asked Trump to condemn the right-wing group Proud Boys, and Trump responded by telling them to “stand back and stand by.”

“I’ll tell you what, somebody has got to do something about antifa and the left,” Trump added.

On Thursday, after the episodes were widely discussed on social networks, POTUS moved to clarify his stance, admitting he didn’t know who the Proud Boys were and calling on them to “stand down.” Later on, he insisted he “has always denounced any form” of white supremacy.