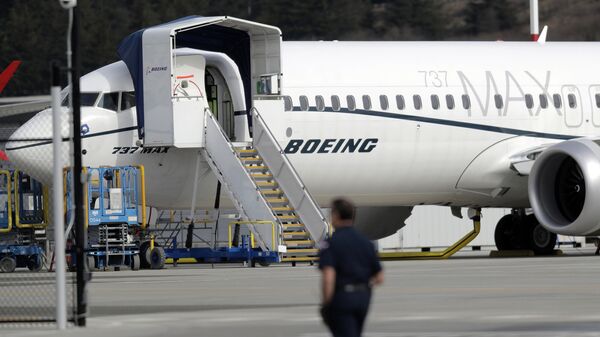 WASHINGTON (Sputnik) - Federal Aviation Administration (FAA) Administrator Stephen Dickson said in a press conference that he has conducted a test flight of the Boeing 737 MAX and indicated that progress has been made to fix the problems plaguing the aircraft.

Dickson said though, there is no solid timeline of when the aircraft will be cleared for public use.

"My flight today and the training I undertook is an excellent baseline as an aviator to be able to understand the systems and understand how they are being utilized on the flight deck and how the airplane performs", Dickson said on Wednesday. "It has been a productive, constructive week. I like what I saw on the flight this morning".

Today, FAA Administrator Steve Dickson piloted the @Boeing 737 MAX in Seattle. A virtual news conference will start at 11:30 AM PT/2:30 PM ET and will be live streamed across all FAA digital platforms. pic.twitter.com/bsBwkgtfez

Earlier in the day, the US House Transportation and Infrastructure Committee said it has advanced legislation that would strengthen the FAA certification process. The measure is designed to address gaps in the FAA's regulatory system for certifying aircraft and adopt critical reforms to improve public safety and accountability.

After two fatal accidents involving 737 MAX - a Lion Air crash in Indonesia in October 2018, and the Ethiopian Airlines crash in March 2019 - the aircraft were grounded around the world and manufacturer Boeing suspended production of this kind of airplanes.

Investigations into the crashes revealed errors in the functioning of the jet's piloting system, lapses in Boeing's safety standard procedures and cover-ups by company officials.