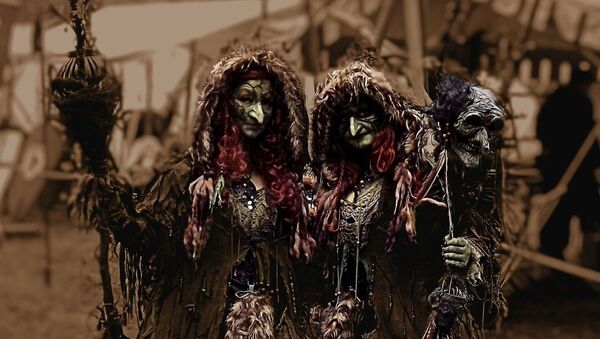 CC0 / /
Subscribe
Witchcraft or witchery is primarily a practice in tribal and indigenous communities to use supernatural means to heal diseases, harm enemies and make predictions for family or community. In India, it is practised in all tribal or indigenous dominated regions, despite prohibitions.

Triveni Chanda and Anand Chanda from a socially deprived community make their living by farming in their meagre land in Gobar Landia Village of Ganjam district of India’s Odisha state. They also work as dayk labourers to supplement their income.

Many villagers from Ganjam work in faraway places as migrant labourers according to a case study.

Two sorcerers once visited their village to find a witch. The sorcerers did some rituals and charged each family money. It was a tradition and all families had to pay their share.

After the rituals were over, the sorcerers went around the village chanting some mantras, calling loudly to the presiding deity of the village, with several villagers in tow, to identify the witch.

As the sorcerers-led procession reached Triveni Chanda’s house, it stopped there and branded her a witch. The woman was dragged out, stripped, kicked and paraded through the village.

She was tied to a pole at the village square until the police came and rescued her.

Chanda was lucky to have kept her life thanks to timely police intervention but when she was going through it, the family’s savings and articles were looted from the house, forcing them to move to a different place.

Many unlucky victims of witchcraft were often assaulted and killed by superstitious and uneducated villagers.

In Odisha alone, three to four women are killed every month after being branded witches, said Sudhanshu Sekhar Dhada from Bhubaneswar.

Dhada has been working for more than three decades to raise public awareness about the social evil and urging the government to enact legislation to stop it.

“Witchcraft is practised when someone in the family is suffering from prolonged illness. The family believes someone else has done witchcraft on them and go to another ‘witch-doctor’ known locally as ‘Gunia’ to get out of it,” Dhada told Sputink.

Most of the victims and the practitioners of witchcraft are women.

The Gunia through her ‘supernatural power’ identifies the person who had done the witchcraft to harm anyone, Dhada added.

“Once the person, who had done the witchcraft, is identified, the affected family goes after the person and kills him/her,” he explained.

Talking of the social evil, Dhada said the practitioners of witchcraft or ‘witch doctors’ double up as quacks who dispense herbal medicines for various ailments, ‘predict’ any danger to the village and suggest measures to counter it.

Besides witchcraft, the witch-doctors provide Hanuman Coin or a copper coin with monkey-headed Hindu God Hanuman’s face embossed on it, since it is believed to cure all diseases and fulfil the wishes of the person wearing it.

They also offer treatment for snake-bites or neutralise any kind of poison in the body of “patients”, hot-branding of infants and newborns as armour against diseases.

According to data available with the National Crime Record Bureau (NCRB), Jharkhand state tops the chart of witch-hunting murders in the country. Between 2001 and 2016, 523 women were lynched after being branded witches.

Besides Odisha and Jharkhand, witch-hunting is prevalent in Bihar, Haryana, West Bengal, Madhya Pradesh, Maharashtra, Gujarat, Chhattisgarh, Assam, Rajasthan and Uttar Pradesh states. According to NCRB data, more than 2,500 victims were tortured and killed in witch hunts between 2000 and 2016.

In August 2020, the High Court of Odisha had held that legislation has not helped to check the social evil in the country in the absence of any federal law.

The court said India's Criminal Code has not helped to combat this menace.

“Experience has shown that the faith of these otherwise naïve populations is exploited by such charlatans who stifle the voices of the victims, brandishing the sword of 'supernatural fear',” reads the judgement.

000000
Popular comments
So called "Witchcraft" is nothing special... It is all about how to use it, use the understanding of the fabric of the universe. There is the use to do good and there is the other side, used by the masters of so called planet earth. Aleister Crowley as just one example.