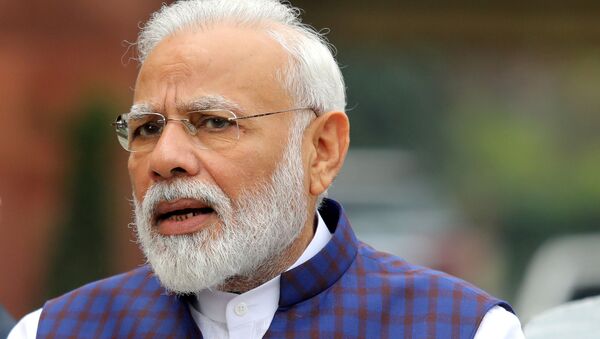 India's Prime Minister Narendra Modi has wheeled out an array of ministerial big guns to defend the controversial farm Bills.

The Bills, awaiting a Presidential approval to become law, were passed amid protest and an absence of opposition lawmakers in the Rajya Sabha, the upper house of Parliament.

The house also saw scenes of “unruly behaviour” by opposition lawmakers during the Bills' passage, leading to eight of them being suspended bringing about the premature end of the Monsoon session.

“The protests against [proposed legislation] represent political dishonesty and the influence of middlemen, considering that [the Bills] together with changes in the Essential Commodities Act to remove the cap on stock holdings, can herald a New Deal for the agriculture sector,” wrote Shah in an article in an English newspaper The Times of India.

#WATCH Congress leadership is dwarfed. Good ones in the party aren’t being heard & those helming it have no standing in the nation. Their own party doesn’t listen to them. They're making baseless arguments to mislead nation: Agri Min on Congress calling #FarmBills ‘kaala kanoon’ pic.twitter.com/3fqVuZimQ7

​Irani also criticised the Congress party for its double-speak on the farm Bills.

​Prasad denounced opposition to the legislation as being politically motivated. He said in an interview to The Indian Express, that the Congress party in its 2019 election manifesto had said it would rationalise the Market Place, or Mandi, Act and create the chance for farmers to sell their produce anywhere.

Read my interview in today's @IndianExpress where I talk about the reforms that have been brought by the @narendramodi govt to empower farmers and allowing 86% of farmers the freedom to sell their produce everywhere across the country. https://t.co/f5MqnpoWQ9 pic.twitter.com/GyxLLuX9Fk

​The ruling nationalist Bharatiya Janata Party also launched a publicity blitz in favour of the legislations.

​Chief of Madhya Pradesh state Shivraj Singh Chauhan also came out in support of the Bills saying that those who were in opposition to them were enemies of farmers.

Farm Bills will double the income of farmers and empower them. Those who are opposing the bills are enemies of the farmers & are misleading them. Why are [the opposition] supporting the middlemen: Madhya Pradesh CM Shivraj Singh Chouhan (23.09.20) pic.twitter.com/LOVfh0ZtDP

​Chauhan’s Communist Party counterpart in Kerala state, on the other hand, said that the state is thinking of challenging the legislation in the Bills. The law department has been asked to look into the matter: Kerala CM Pinarayi Vijayan (File pic) #AgricultureBills pic.twitter.com/Sq3U8lOUFP

​Meanwhile, farmers continued their protests in Punjab, Haryana, Delhi, Karnataka and several other states. A large number of farmers squatted on railway tracks in Punjab state’s Amritsar city as part of a “Stop the Train” demonstration against the farm Bills.

​​The Parliament passed three Bills this year - Farmers Produce Trade and Commerce (Promotion and Facilitation) Bill, Farmers (Empowerment and Protection) Agreement of Price Assurance and Farm Services Bill, and Essential Commodities (Amendment) Bill. Of these, farmers and opposition parties are really objecting to the first two.