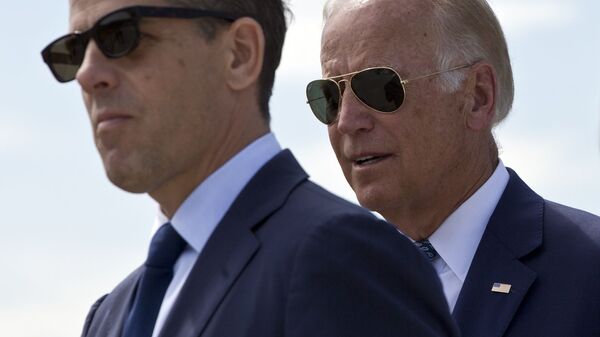 Morgan Artyukhina
All materialsWrite to the author
On Wednesday, a hotly anticipated probe by Senate Republicans into corruption allegations against Democratic presidential nominee Joe Biden and his son, Hunter, reported no evidence of wrongdoing. However, one analyst told Sputnik that investigators arrived at this conclusion by “moving the goalposts.

The white-hot core of the impeachment of US President Donald Trump last December was his pushing the Ukrainian president to investigate the Bidens’ potentially corrupt behavior. Hunter Biden had become a board member of natural gas company Burisma Holdings, which does business in Ukraine, in the aftermath of the 2014 coup d’etat against Ukrainian President Vyktor Yanukovych, which was heavily supported by the United States.

Joe Biden was US vice president at the time of these events, and no probe of the situation had yet been completed when Trump spoke with Ukrainian President Volodymyr Zelenskyy last spring.

However, the Senate’s investigation admitted that Hunter had “cashed in” on his father’s name during business negotiations and even found that his work at Burisma gave the appearance of a conflict of interest and had caught the eye of higher-ups in the administration of US President Barack Obama. Despite this, the report concluded there had been no corruption because there was no evidence that Vice President Biden had shaped US foreign policy to support his son’s ambitions.

Journalist and political analyst Caleb Maupin told Radio Sputnik’s Political Misfits on Wednesday that the report’s findings were “moving the goalposts” to disprove claims no one has made.

“The whole thing, if you look at it, just reeks of corruption,” Maupin told hosts Michelle Witte and Bob Schlehuber. “I think this is a benefit that Joe Biden’s son got out of” the 2014 US-backed coup in Ukraine, “and I think that if he were not Joe Biden’s son, he wouldn’t have gotten that position.”

“At the same time that the United States is involved in destabilizing Ukraine and toppling the government - you know about the Euromaidan event: billions of dollars from US NGOs sent to foment chaos in the streets and bring down the government of Yanukovych. You have the phone call leaked where it appears [then-Assistant Secretary of State] Victoria Nuland is almost selecting who becomes the new leader.”

“Amid all these events where the United States is meddling in Ukraine’s affairs, destabilizing the country, toppling the elected leader, putting in the government a lot of far-right-wing groups and ultra-nationalists involved in that … amid all of these events, somehow, the son of the vice president just ends up getting into the natural gas business with Burisma Holdings,” Maupin said, noting Hunter had no previous experience in the gas business.

“Now, that’s suspicious, and that’s a reason for people to look into this and say something’s not right here. Now, did it influence the policy? Do we think that the Obama administration and the whole government did this just so Hunter Biden can get the job? Clearly not, but it looks like some people were scratching each other’s backs, so to speak,” he said. “It doesn’t look good.”

“If something like this were going on with a Trump official, I think the Democrats would raise this concern. The fact that Trump raised this concern about what was going on, it’s not shocking. These kind of things go on; this is what corruption looks like,” he added.

Maupin noted the US has “very specific legal definitions” of corruption that ignore the fact that “money still has huge amounts of influence in politics. It’s just that there are legal stipulations about how that money can have influence … everyone knows that money equals power in American politics, and people aren’t happy about it.”

However, he parried suggestions that repeating facts like these is part of a Russian disinformation operation, noting that such accusations are thought policing.

“The question is: did this happen or not?” he noted. “This idea that we shouldn’t think certain thoughts, ‘don’t let your mind go in this direction because if you do, that’s what the Russians want’ - this is totalitarian, McCarthyist thinking. If a story is false, you don’t say it’s false because it’s similar to something somebody you don’t like might have said or might have thought. You said it’s false because of things in the story that are inaccurate or a train of logic that isn’t accurate.”

Another fact Maupin noted had actually been raised as a concern that went unaddressed in the Senate report was “when Joe Biden bragged about getting the prosecutor who was looking into Burisma Holdings fired. We know that when Joe Biden was speaking at the Council on Foreign Relations, he bragged about how he prevented the money from going to Ukraine until they fired a certain prosecutor … so there’s a lot of stuff we can ask questions about.”