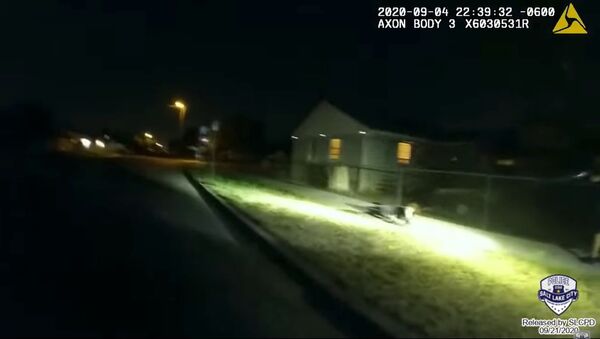 The footage, which was released as part of the city’s policy to release video of police shootings within 10 business days of their occurrence, includes the initial 911 call made by Cameron’s mother and recordings from different vantages that were captured by responding officers.

Recordings show that when Golda Barton, Cameron’s mother, dialed 911, she requested that a crisis intervention officer be dispatched to her home. Barton told the dispatcher that her autistic, teenage son was “out of control” and was having a mental health episode. The call to law enforcement was meant to get her help in transporting her son to a medical facility.

“He’s sick,” she told the dispatcher. “He needs to go to the hospital.”

Barton informed the official that her son had previously had run-ins with officers, noting that he’d led cops on a chase and been in a “shootout” with a police agency in nearby Nevada. Additionally, Barton indicated that he might have “some type of a gun” on his person, and that officers are a “trigger” for Cameron.

Once officers arrived at the home, Cameron ran away and into the Glendale neighborhood. Video shows several officers, some of whom are questioning how best to respond to the situation, searching for the teenager. Although Cameron is eventually found following a brief foot chase, he’s shot multiple times within moments of being given orders by an officer.

Upon a search of the scene, police never found a firearm.

A GoFundMe page run by a family friend indicated that Cameron has injuries to his shoulder, ankles, intestines and bladder. “The long term effects of his injuries are still unknown, but it is likely that his recovery will be long and require multiple kinds of treatment,” the page reads.

Barton spoke with local news station KUTV Sunday and questioned the officers’ decision-making. “He’s a small child. Why didn’t you just tackle him? He’s a baby. He has mental issues.”

Wesley Barton, Cameron’s older brother, told the Salt Lake Tribune that his younger brother only ran away from police because he was scared, adding that seeing the recordings was “horrible.”

“To see your little brother bleeding out, saying his last words. It plays in my head over and over,” he said.

Wesley further told the outlet that his younger brother, who has lost feeling in one of his arms, isn’t likely to walk normally again.

Salt Lake City Police Chief Mike Brown and Salt Lake City Mayor Erin Mendenhall issued prepared remarks on Monday regarding the release of the body camera recordings; however, neither official directly addressed the incident as a result of ongoing investigations.

“As a member of this community and the mother of a 14-year-old boy, I am profoundly heartbroken and I am frustrated,” Mendenhall said. “This shooting is another tragedy.”

Sim Gill, the Salt Lake City district attorney, is expected to review the case and make a decision in the coming days on whether the officer was justified in discharging his department-issued firearm.