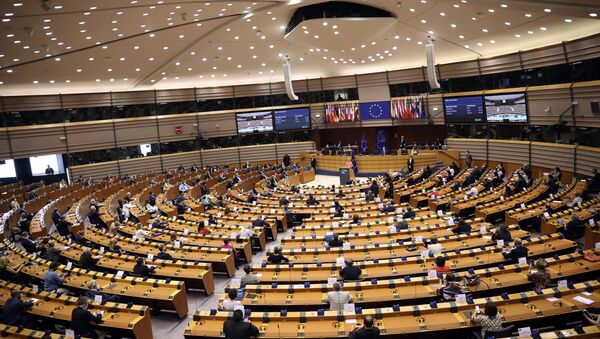 Henry Batyaev
All materialsWrite to the author
Allegations of Navalny's ostensible poisoning with a Novichok-like substance have prompted calls from the EU to tighten sanctions against Russia. Moscow dismissed claims of any complicity in Navalny's case and underscored the lack of evidence in the West's accusations.

Referring to the EU’s attempts to name a new round of sanctions against Russia after Navalny, Zakharova said Moscow considers it as overtly trying to give them an anti-Russian spin.

Zakharova added that judging by Brussels' remarks on the issue, it appears they are not interested in establishing the truth, adding that the EU "information campaign" is aimed at making Brussels' destructive narrative towards Russia irreversible.

According to the spokeswoman, Berlin is continuing to find pretexts to hinder Moscow's efforts to work jointly on the Navalny incident.

The European Parliament earlier in the day adopted a resolution that demands additional sanctions against Russia in relation to Alexei Navalny's alleged "poisoning" last month.

The resolution calls for an immediate international investigation into the situation surrounding the opposition figure with the participation of the European Union, the United Nations, the European Council and the Organisation for the Prohibition of Chemical Weapons.

The announcement comes as the European Parliament held the final day of the plenary session to vote on the situation surrounding Alexei Navalny, as well as on the unrest in Belarus.

In a draft resolution, issued the day before, the lawmakers called for a revision of the EU's relations with Russia and continuation of its isolation at international forums. There were also calls to terminate the Nord Stream 2 gas pipeline project.

On 20 August, Navalny fell ill during a domestic Russian flight. He was initially treated in the Siberian city of Omsk, where the plane had to urgently land. Two days later, once the doctors established he was fit for cross-border aerial transportation, the man was flown to the Charite hospital in Germany for further treatment.