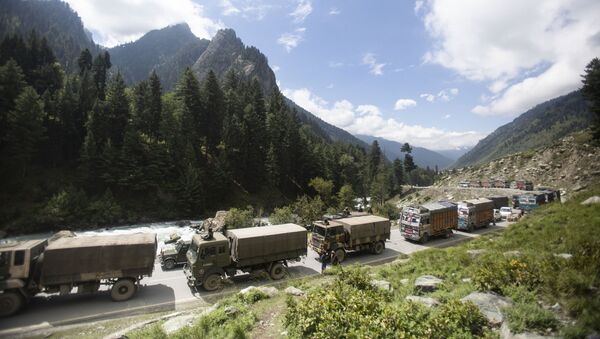 Rishikesh Kumar
All materialsWrite to the author
Nair N.B.
Sputnik correspondent
All materialsWrite to the author
The security situation along India’s border with Pakistan and China have become tense: New Delhi has accused Islamabad of violating their ceasefire on the western border, and claimed that the China's People’s Liberation Army has made multiple incursion attempts on the loosely-demarcated Line of Actual Control.

Despite a violent faceoff between armies of India and China in eastern Ladakh and a continuing build-up on both sides, there have been no infiltration attempts along their border, India's federal Home Ministry has informed Parliament.

"No infiltration has been reported along the Indo-China border during the last six months," India's Junior Home Minister Nityanand Rai told Rajya Sabha, the upper house of Parliament on Wednesday.

India has indicated that it is not considering hundreds of transgressions or ingresses by the People's Liberation Army in the recent past as "infiltration".

Official data provided by the Indian government shows that there were 170 Chinese transgressions across the Line of Actual Control (LAC) in the first four months of 2020 alone, including 130 in Ladakh. There were only 110 such transgressions in Ladakh during the same period in 2019.

Indian intelligence input suggests that Chinese troops have captured around 1,000 square kilometres in eastern Ladakh since the ongoing stand-off broke out in April this year.

Besides an increased level of military equipment deployment, the troops of the two countries, for the first time in 45 years, fired 100-200 "warning shots" on the North Bank of Pangong Lake in early September, according to sources in New Delhi. Acknowledging the exchange of fire, the Chinese Army said that it was the Indian side that initiated the act.

In another incident reported last week, dozens of Chinese troops tried to approach Indian positions on the South Bank of Ladakh's Pangong Lake and fired shots in the air.

The Indian foreign ministry has said that Chinese troops crossed the border and urged Beijing to withdraw front-line forces to diffuse tensions.

On Tuesday, Indian Defence minister Rajnath Singh said: “China continues to be in illegal occupation of approximately 38,000 sq. kms in the Union Territory of Ladakh. China also claims approximately 90,000 sq. kms. of Indian territory in the Eastern Sector of the India-China boundary in Arunachal Pradesh.”

The Indian defence ministry also admitted in August that Chinese 'aggression' "has been increasing along the LAC and more particularly in the Galwan Valley since May 5, 2020" and "the Chinese side has transgressed in the areas of Kungrang Nala, Gogra and the north bank of Pangong Lake on May 17-18". Later the defence ministry decided to remove the aforementioned document within two days.

In June this year, the armies of both the countries had a violent faceoff, in which 20 Indian soldiers were killed. According to Rajnath Singh, Indian troops also “inflicted costs, including casualties, on the Chinese side.”

Junior Home Minister Nityanand Rai said that during the last six months there were 47 attempts at infiltration along the Indo-Pakistan border.

The minister revealed there were 594 attempts of infiltration from Pakistan, in which the subversives succeeded in 312 between 2018 and July of this year. He said that while 582 militants were eliminated during the period, the security forces captured 46. Seventy six security personnel also lost their lives.

India and Pakistan have been at loggerheads over Kashmir; both countries claim Jammu and Kashmir in full, but rule in parts. They have also fought two wars over Kashmir.

New Delhi has accused Islamabad of supporting militant groups fighting for an independent Kashmir and providing moral and material support for them, a charge rejected by Pakistan.