Dancing Into Equine History: Remembering the Magic of Nijinsky, Fifty Years On 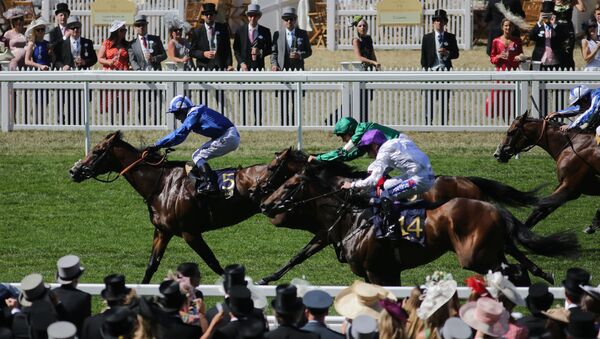 Neil Clark
All materials
Fifty years ago this weekend, the colt Nijinsky, named after the legendary Russian ballet dancer, became the first Triple Crown winner since 1935; no horse has achieved the feat since.

September 1970. It was the month which saw the sudden, shock deaths of the long-serving ruler of Egypt, General Gamal Abdel Nasser, and the rock guitarist Jimi Hendrix, and conflict in Jordan between the country’s armed forces and the PLO. But the news wasn’t all bad in that so-called ‘Black September’. At Doncaster, on Saturday 13th September, a big bay racehorse with three white feet named after the world’s most famous ballet dancer became the first for thirty-five years to land racing’s prestigious three-year-old Triple Crown, ie win the 2000 Guineas, Derby and St Leger in one season. No horse has achieved the feat since, showing how difficult it is to win three Group One races over three different distances (1m, 1m4f and 1m6 and a half furlongs at three very different tracks (Newmarket, Epsom and Doncaster) at different times of the year. To win the Triple Crown a horse must have speed AND stamina. And be able to maintain the highest level of form from early in the season until mid-September. In other words, the horse must be very, very special.

Nijinsky’s record-breaking accomplishment was all the more remarkable given the fact that in the summer of 1970 he was hit with a bad bout ringworm. Most of his hair fell out. But after being put on a diet of raw eggs and Irish Stout he recovered to win St Leger. Before the Derby too, Nijinsky had been ill, with a sharp attack of colic. But he still won.

Nijinsky enjoyed worldwide popularity. A film was made about him narrated by Orson Welles, and later he was voted the racehorse of the Millenium. His name became part of popular culture- and was even referenced in Britain’s favourite sitcom, Only Fools and Horses. You could say that Nijinsky was always going to be brilliant, considering whom he was named after. His sire was called ‘Northern Dancer’, so Nijinsky was a highly appropriate name.

The God of Dance

The dancer Vaslav Nijinsky was born in Imperial Russia, in 1889. Noted for his ‘powerful but graceful technique’ and his rejection of conventional forms for ’free expression‘ he was a lead dancer, with Anna Pavlova, of Diaghilev’s legendary Ballets Russe, which took Paris by storm in 1909. Nijinsky was the equivalent of the international pop star of his day.

Every wanted to see ‘The God of Dance’ perform. 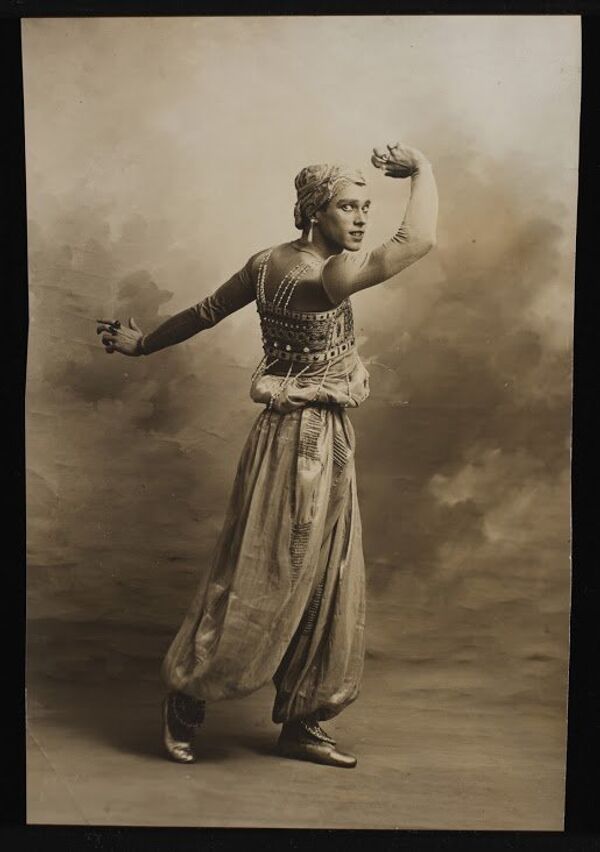 Nijinsky has a claim to be the greatest dancer of all time, so how fitting that the racehorse named after him achieved a similarly exalted status. Like the dancer, Nijinsky the racehorse was highly strung. The dancer never liked to talk to people, while the jockey Lester Piggott said of the racehorse he rode to so much glory: ‘He never really talked to you. He always seemed to be looking at birds’.

The debate will rage for many years to come over whether Nijinsky or Frankel, (who retired in 2012 unbeaten in 14 races, which included ten consecutive wins in Group Ones), was the greatest Flat racehorse of all time, but in Nijinsky’s favour, it is worth pointing out that Frankel not only didn’t attempt the Triple Crown but never raced over a distance beyond 1m2 and a half furlongs. So at least in terms of ‘proven’ versatility Nijinsky had the edge.

While racing fans the world over will be remembering Nijinsky this weekend, it’s sad to note that, unlike in 1970, when the course was packed to the rafters to see history being made, this Saturday, the St Leger will be run behind closed doors. Spectators were allowed in on Wednesday, but then the Doncaster council‘s director of public health intervened to force the meeting to bar the public from Thursday. The decision was justified on grounds of ’public safety’ but it made little sense from a scientific or medical perspective, with the latest coronavirus ‘positive case’ rate for the borough being just 10.9 per 100,000 people. In July, the same director of public health at Doncaster council aid that any figure above 20 would be a cause of concern, so this week’s decision involved considerable shifting of the goalposts.

As to what wins Saturday’s race, here’s my horse-by-horse Sputnik Intelligent Punter's Guide. If Nijinsky were in the field, he’d be a strong nap selection to dance home ahead of his rivals!

First run in 1776, St Leger is the oldest of the five English Classics. Favourites usually go well: they have won two of the last three runnings, including last year when odds-on shot Logician obliged, and in the last nine years only two favourites have finished out of the frame.

That said, in the last ten years, we’ve seen winners at 14-1, 12-1, 25-1 and 22-1 so don’t be put off backing an outsider if you fancy one. The trainers with the best record in the race are, as you’d expect, the power-duo of John Gosden and Aidan O’Brien. Gosden has won it five times, including three times since 2010, while O’Brien is chasing his seventh victory having won it twice in the last three years, both times with 3-1 shots. This year Gosden has no runners, but O’Brien saddles three. Winning Group race form is also an advantage, with seven of the last ten winners ticking that particular box. 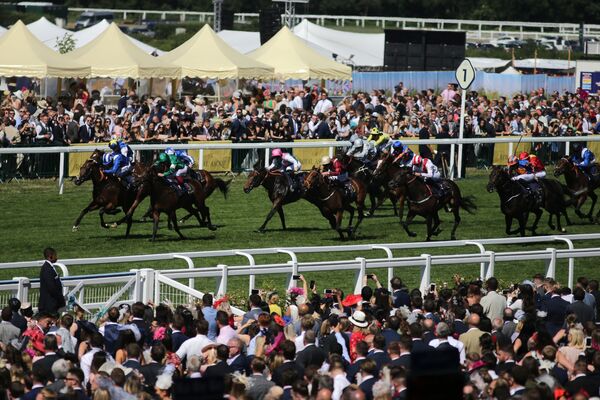 Horses race during the Commonwealth Cup on day four of the Royal Ascot horse racing meet, in Ascot, west of London, on June 22, 2018.
© AFP 2022 / DANIEL LEAL-OLIVAS

Needs to improve on the ratings but could be given an each-way squeak based on his staying-on second-place behind Santiago over 1m6f34y in the Queens at Ascot in June.

Trained by O’Brien so can’t be summarily dismissed, but while trip should be fine, and each-way possibilities based on his Irish Derby third, his lack of a previous Group race win counts against him on the stats from a win perspective.

Trained by Aidan O’Brien’s son Joseph, this one has won all three starts this season. Needs to step up as never raced in Group company but did win his last race (a Listed event) very easily, has attracted market support and could figure.

Comfortably landed the Group 3 Geoffrey Freer Stakes at Newbury on last run, staying on very strongly at the end of that 1m5f event indicating that the extra furlong here will suit to a tee, still needs to improve again but going the right way and clearly one for the short-list.

Failed to hit the heights in the Derby when he stumbled at the start and never got going, but if one puts a line under that run, he could be given an each-way shout based on his staying-on third in the King Edward VII at Ascot in June. Others though, look more likely winners.

Another Aidan O’Brien runner, this one experienced trouble in running when third in a Group 3 at Leopardstown last time. May be a bit overpriced at 50s but still needs to improve in order to feature in the finish.

Willie Muir’s colt has been one of the revelations of the season, making the most of his superior race fitness to land the King Edward at Ascot at odds of 18-1 and then in August, the Great Voltiguer, a very good trial for this, at 10-1. Big chance so long as he‘s as effective over this longer trip.

Ticks all the boxes, one of the market leaders trained by Aidan O’Brien, has Group race-winning form (won the Group One Irish Derby) and we know he stays (won the Queens Vase and was 3rd in the Goodwood Cup over 2m). On top of that he’s got Frankie Dettori on board, who has won the race five times, including last season. Interestingly every time Frankie has won a Leger he’s followed up the next year with another win, so the omens are good.

Made all to win a Group 3 at Goodwood latest, bouncing back from disappointing run in the Great Voltiguer, if things go well for him upfront can’t dismiss him hanging on for a place for trainer (Mark Johnston) who saddled the second and third last season and the fourth the year before.

Under-the-radar runner from Ireland, up against it on the ratings, but the form of his close second behind Pista in a Listed race over 1m6f at Leopardstown in August has worked out well with his conqueror winning a Group 2 at Doncaster on Thursday and could run better than his long odds suggest.

This one will have to box clever to win: his sole start, when he won a Novice stake at Doncaster over an extended 1m3f in June was promising, but this is a  big step up.

Verdict: A really intriguing race, in which few of the eleven runners can be entirely dismissed. Pyledriver and Hukum have obvious chances and come here in excellent form, and each-way chances can be given to others, including Subjectivist, but the likeliest winner on the trends is Santiago, who is currently around about the same price (11-4/3-1) as Aidan O’Brien’s last two winners.