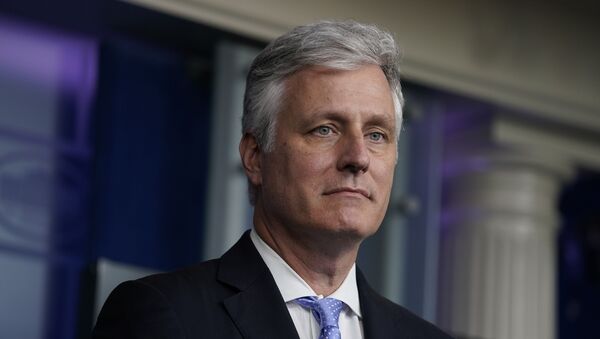 Daria Bedenko
All materialsWrite to the author
Former Department of Homeland Security (DHS) Acting Under Secretary for Intelligence and Analysis, Brian Murphy, has accused the Trump administration of manipulating the agency's intelligence , shaping it to fit the president's political interests.

US National Security Adviser Robert O'Brien "never sought to dictate" the intelligence community's focus on threats to the integrity of US elections or any other topics, White House spokeswoman Sarah Matthews stated, cited by Reuters.

Matthews characterized accusations by O'Brien of the White House trying to shape the agency's intel focus as “false and defamatory.”

The comments came after a whisteblower complaint filed by former DHS top official Brian Murphy emerged on Wednesday, claiming that the Trump administration manipulated agency intelligence, shaping it so that it would fit with Trump's political interests.

Particularly, Murphy said that he was instructed to minimize threats posed by "white suprematists", to make false statements to Congress about terrorism threats on the southern border and to not look into alleged Russian "meddling" in the 2016 US presidential election.

He asserted that the instructions came specifically from O'Brien, via the acting DHS secretary, Chad Wolf.

As Murphy tells it, he refused to follow the instructions he was given, for which he faced what he described as "retaliation", including reassignment to another department. This was, however, denied by DHS spokesperson Alexei Woltornist.

“The Department generally does not comment on the specifics of OIG referrals, but we flatly deny that there is any truth to the merits of Mr. Murphy’s claim. DHS looks forward to the results of any resulting investigation and we expect it will conclude that no retaliatory action was taken against Mr. Murphy," Woltornist said in a statement.

Reacting to the complaint, the chairman of House Intelligence Committee, Adam Schiff, said that the investigation into the matter is ongoing, adding that he had requested that Murphy give testimony before the Committee.​

"We will get to the bottom of this, expose any and all misconduct or corruption to the American people, and put a stop to the politicization of intelligence", Schiff said in a statement, denouncing the Trump administration's decision to end briefing Congress in person.

This puts our national security at risk. We will investigate:https://t.co/Z7npo3P6zv

Murphy will be testifying before the Committee on 21 September.