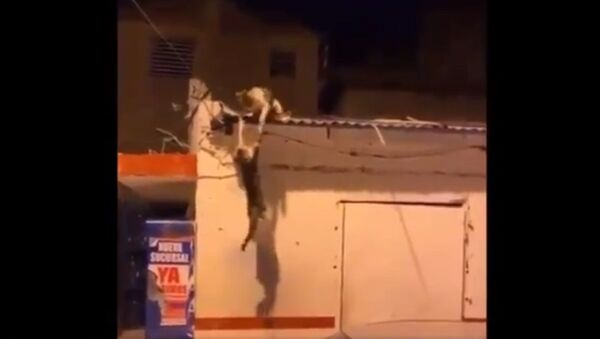 Do you remember that scene from Disney’s iconic animated movie The Lion King where Simba's father Mufasa and the evil usurper Scar bare their teeth in a fight scene on top of a cliff? Well, if you don't, this video will bring back nostalgic memories of the emotional scene for you. Buckle up.

A 17-second video posted from the Dominican Republic has gone viral on social media as it shows two street cats literally reenacting the cliff scene from The Lion King. The snippet shows two cats engrossed in what looks like a fight on the tin roof of a little shack, not too high above the ground.

As the video progresses, one of the cats slips from the roof and the other tries to hold its paw – recreating the iconic Mufasa-Scar scene from the movies, that shows the lion brothers together for the last time.

Later, just like Scar lets go of Simba's father and watches him fall down into the valley, the cat who has managed to stay on the roof lets go of the cat that slipped.

Due to its likeness to the The Lion King, the video has garnered thousands of likes and shares on Facebook and Twitter. The video has left netizens in awe.

The Lion King remake I've been waiting for 😌