The 1619 Project: Self-Abasing Historical Revionism or Just The Uncomfortable Truth About America? 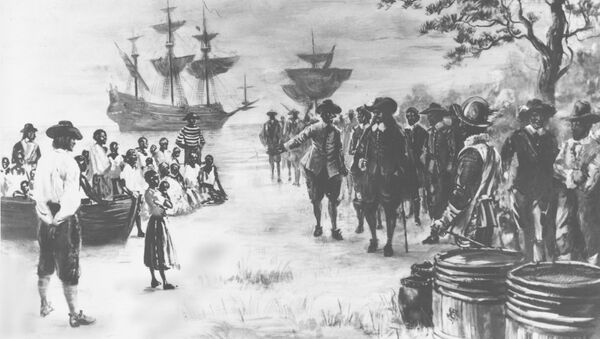 © AP Photo
Subscribe
Chris Summers
All materialsWrite to the author
In August 2019 the New York Times launched the 1619 Project, picking the date on which the first African slaves were brought to the English colony of Virginia. The project has outraged traditionalists in the United States.

US President Donald Trump has threatened to withdraw funding to schools who teach the so-called 1619 Project in their history syllabus.

On Sunday, responding to a tweet  from a member of the public who claimed California had “implemented the 1619 project” and added "soon you won’t recognise America."

Department of Education is looking at this. If so, they will not be funded! https://t.co/dHsw6Y6Y3M

​Trump tweeted that the federal Department of Education was looking into it and added: “If so, they will not be funded.”

On Tuesday, 8 September, the Mayor of Chicago, Lori Lightfoot, said the president had no power to cut funding to schools which chose to teach the project.

If the White House sought to press the issue it could go all the way to the US Supreme Court, just like the 1987 ruling on the teaching of creationism in public schools.

​But why does the 1619 Project cause so much ire among Trump supporters?

The New York Times - which is often seen by MAGA supporters as being run by an East Coast elitist, liberal clique - said the idea behind the 1619 Project was to “reframe the country’s history by placing the consequences of slavery and the contributions of black Americans at the very centre of the national narrative.”

It then teamed up with the Pulitzer Center to develop a school curriculum based on the project.

The average eight-year-old child in America could tell you the United States came into being on 4 July 1776, when it declared independence - although it was not until 1783 that Britain conceded defeat in the Revolutionary War and left. 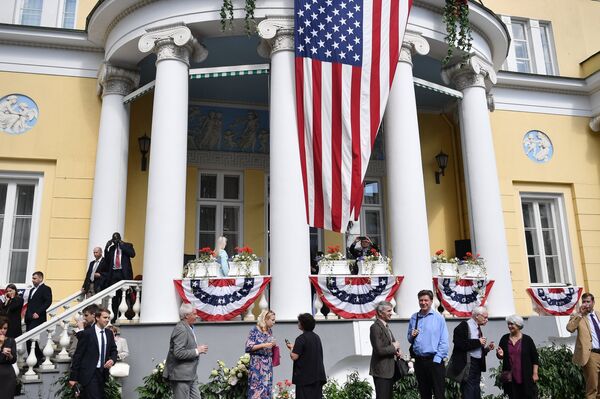 American history has always begun with the “heroic” events of the late 18th century, including the Boston Tea Party and Paul Revere’s midnight ride and concluding with George Washington’s defeat of General Cornwallis at Yorktown - with little or no mention of the French army’s role in the latter.

But the New York Times and many liberal historians believe the syllabus needs to go back further, to the beginning of slavery, which they say was a seminal moment in the creation of “American” society.

Traditionalists feel the 1619 Project is political correctness gone mad and should not be mentioned anywhere near a classroom.

​In May this year New York Post columnist Gerard Baker wrote that the point of the 1619 Project was to define America defines America “as a nation built not on the lofty ideals of freedom and self-government laid out in the document written by the Founding Fathers, but as one built on the degradation, dehumanisation and persecution of black people.”

​For MAGA supporters and for many Americans the United States is the “home of the free” and “land of the brave” and its bedrock is the constitution penned by Thomas Jefferson, which states that “all men are created equal”.

Jefferson - who later became President - himself owned hundreds of slaves and certainly those who drafted the constitution did not consider their male slaves to be anything like their equals. 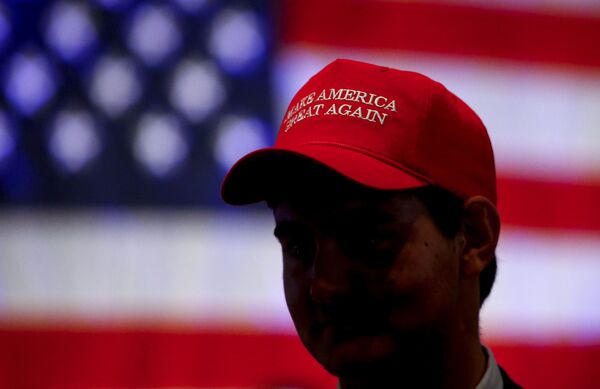 The editorial went on to say: "The very premise of the 1619 Project, in fact, is that many of the inequalities that continue to afflict the nation are a direct result of the unhealed wound created by 250 years of slavery and an additional century of second-class citizenship and white-supremacist terrorism inflicted on black people."

Earlier this week Seth Cohen, a writer with Forbes, argued that the Trump administration was “threatening to censor the way schools teach about the history of slavery and racism in the United States.”

000000
Popular comments
And what about GENOCIDE of red people ?
Milos2
9 September 2020, 18:43 GMT9
000000
Gulag, I suppose that depends on how you look at it. The colonies in America came into being as a result of repudiating the European way of things. When they renounced the Monarchy they became 'American'. There are a number of European States that act humane and never coveted what their neighbours had. I cannot conceive of Iceland, for example, of being an evil entity. Nor Finland, nor Norway. Sweden had empire urges at one time, but expunged them long ago. Even keeping in mind where they came from, I'd argue that America is the worst plague - besides the bubonic plague - ever unleashed on the world.
rgl
9 September 2020, 19:44 GMT7
000000
Newsfeed
0
New firstOld first
loader
LIVE
Заголовок открываемого материала
Access to the chat has been blocked for violating the rules . You will be able to participate again through:∞. If you do not agree with the blocking, please use the feedback form
The discussion is closed. You can participate in the discussion within 24 hours after the publication of the article.
To participate in the discussion
log in or register
loader
Chats
Заголовок открываемого материала
Worldwide
InternationalEnglishEnglishMundoEspañolSpanish
Europe
DeutschlandDeutschGermanFranceFrançaisFrenchΕλλάδαΕλληνικάGreekItaliaItalianoItalianČeská republikaČeštinaCzechPolskaPolskiPolishСрбиjаСрпскиSerbianLatvijaLatviešuLatvianLietuvaLietuviųLithuanianMoldovaMoldoveneascăMoldavianБеларусьБеларускiBelarusian
Transcaucasia
ԱրմենիաՀայերենArmenianАҧсныАҧсышәалаAbkhazХуссар ИрыстонИронауОssetianსაქართველოქართულიGeorgianAzərbaycanАzərbaycancaAzerbaijani
Middle East
Sputnik عربيArabicArabicTürkiyeTürkçeTurkishSputnik ایرانPersianPersianSputnik افغانستانDariDari
Central Asia
ҚазақстанҚазақ тіліKazakhКыргызстанКыргызчаKyrgyzOʻzbekistonЎзбекчаUzbekТоҷикистонТоҷикӣTajik
East & Southeast Asia
Việt NamTiếng ViệtVietnamese日本日本語Japanese俄罗斯卫星通讯社中文（简体）Chinese (simplified)俄罗斯卫星通讯社中文（繁体）Chinese (traditional)
South America
BrasilPortuguêsPortuguese
NewsfeedBreaking
07:48 GMTSCO Summit: Putin Calls for Common Line on Afghanistan in Wake of US 'Flight'
07:22 GMTPsaki Says Biden's Constant Coughing Not 'an Issue of Concern'
07:11 GMTIndia Eyes Record Vaccination on PM Modi's Birthday, But Opposition Observes It as Unemployment Day
07:06 GMTIndia Doesn't Subscribe to 'Clash of Civilisations' Theory, Jaishankar Clarifies to China's Wang Yi
06:59 GMTUN Chief: 'Absolutely Essential' to Create Mechanisms to Inject Cash Into Afghan Economy
06:50 GMTChinese Astronauts Return to Earth After 90-Day Space Mission
06:36 GMTFaroe Islands Pledges Review of Whaling Hunt Rules Amid Outcry Over Largest-Ever Cull
06:31 GMT'I'm Vaccinated B**ch!' Watch 'Drunk Karen' Attacking Restaurant Staffers for Not Wearing Masks
06:24 GMTOn Narendra Modi's 71st Birthday, Here's a Look at Indian PM's Most Iconic Fashion Moments
06:12 GMTOver 150 Tonnes of Chinese Vodka Spilled as Result of Sichuan Earthquake, Reports Suggest
06:06 GMTHappens to The Best of Us: Australian PM Morrison Plays Down Joe Biden 'Forgetting' His Name
05:47 GMTUS Will Boost Military Presence in Australia as China Slams 'Irresponsible' AUKUS Pact
05:34 GMT'Tomorrow I'm Dating My Doorman, Next Day Someone Else': Irina Shayk Reacts to Rumoured Kanye Fling
05:27 GMTCOVID-19 Live Updates: Changes to UK's International Travel Rules Expected on 17 September
05:10 GMTSociety Cannot Be 'Held Hostage' by Unvaccinated, Finnish Health Boss Claims
04:30 GMTGimme That: Adorable Golden Retriever Twins are Ready for a Treat
04:16 GMTUS House Armed Services Committee Warns Troubled F-35 Program May Become Unsustainable at Its Peak
04:01 GMTUS Civil Rights Leader Applauds Police Chokehold Ban, Urges Congress to Move on Floyd Act
03:55 GMT'Cut Him Off Now!': Newsmax Host Loses Cool After US Vet Critiques Trump Over Afghan Withdrawal
03:20 GMTUK High Court Rules Will of Prince Philip to Remain Sealed for 90 Years