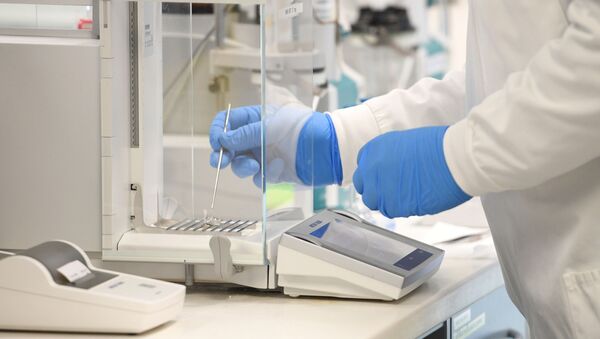 Daria Bedenko
All materialsWrite to the author
A third trial round for an AstraZeneca vaccine against the virus was launched in the United States in August. Earlier, tests on other COVID-19 vaccines were begun in the United Kingdom, Brazil and South Africa. The vaccine is reportedly being developed as a joint partnership between the University of Oxford and its spin-off company, Vaccitech.

The third round of trials for the AstraZeneca anti-coronavirus vaccine has been halted to look into a "potentially unexplained illness" in a participant from the United Kingdom, Stat News reported, citing a company representative.

According to the AstraZeneca spokesperson, the “standard review process triggered a pause to vaccination to allow review of safety data.” The nature of the possible side effect was not immediately known, with reports only describing it as "potentially unexplained illness" which has to be reviewed.

"We are working to expedite the review of the single event to minimize any potential impact on the trial timeline. We are committed to the safety of our participants and the highest standards of conduct in our trials", Stat News quoted the AstraZeneca spokesperson saying.

The quoted statement outlined that it is common for large trials to see pauses in the event of an unexplained illness.

​Brazilian Health Agency Anvisa, cited by CBN, confirmed suspension of the trials and outlined that the participants, including Brazil, had been informed.

According to Stat, the hold in the AstraZeneca coronavirus vaccine trials will impact clinical tests conducted by other vaccine manufacturers.

Companies also developing COVID-19 vaccines include Pfizer Inc, Johnson & Johnson, Moderna Inc, Novavax Inc, Sanofi and several others. AstraZeneca launched a third round of trials in the US in August, earlier starting tests in other countries.

The first batch of the Russian vaccine, developed by the Gamaleya National Research Center of Epidemiology and Microbiology and the Russian Direct Investment Fund (RDIF), was released into public circulation earlier on Monday.

At least 20 countries expressed interest in purchasing or distributing the vaccine, including the UAE, Saudi Arabia, Indonesia, the Philippines, Mexico, Brazil and India.